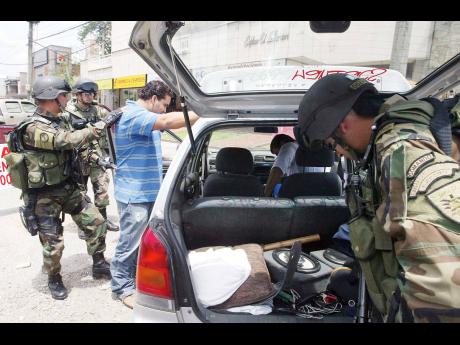 AP/ File
In this 2006 file photo Colombian soldiers are search a car, as part of increased security measures as the military and police prepare for the inauguration of President Uribe in Medellin. The city, once rated as most violent has been working toward building a more inclusive, vibrant, and resilient city.

Just before a devastating 1692 earthquake made two-thirds of Port Royal disappear beneath the sea, the town was said to the wickedest place in the world, which probably meant that law and order was either absent or complicit with the most convenient and powerful criminality.

In 2005, Jamaica had the highest murder rate in the world. Curiously, this happened at a time when the style of policing of our police force, the Jamaica Constabulary Force, was at its most offensive in its effort to ‘beat the crime monster’.

Twenty years ago, the city of Medellín in Colombia was rated by Time magazine as the most murderous city on the planet. And, why not? Not only was the government saddled with intermittent pushback from a rebel group who claimed comity with ‘the people’, but its main enemy was Pablo Escobar, head of the most powerful drug cartel in the world.

That past has now dissolved, and the present is what we have. The city of Medellín has been almost magically transformed, and one reader has suggested that Jamaica can extract lessons from the Medellin experience. This, of course, is not an original idea.

British newspaper The Telegraph wrote in 2018 in one part of its assessment of Medellin’s successful transformation, “Young people who went abroad for education and for work in the bad years have come home in droves, bearing an international sophistication and an entrepreneurial energy.”

That automatically creates a problem for Jamaica apart from the other obvious ones. Once Colombia extricated itself from Escobar and his key lieutenants, their main headaches were lessened.

Space does not allow this article to cover the mechanics of all that Colombia did to make itself attractive to its brightest and its best and to lure them back home. But what is presented to us in Jamaica is, what do we have here to lure back our brightest and our most innovate young Jamaicans producing and living in the United States?

Much of this argument touches on the core of any society’s growth and developmental curve. It must involve the best of its young people, and in all honesty, there is nothing on the landscape that I can see to hold those still here on the rock, or on the other hand, draw in those who departed in the last decade.

Sometimes it is better to leave old towels with the unpleasant smell of mothballs in an old chest of drawers than to hang them in the sun for a while before transferring them to the linen closet. While I must confess that I was not energising any unusual burst of nerve activity in eagerly awaiting the ombudsman’s report on the 2020 election, when it did come, it presented hardly any surprises, and, in fact damp squibs were aptly featured.

The open breaches of the COVID-19 protocols were there for us all to see. That is, those who followed the trail of both campaigns. What was really to be commended was the general response of voters on election day within the pandemic guidelines. The political ombudsman findings, “solidified the view that vote buying has become an accepted norm by too many Jamaicans”. Oh, wow!

Madam Ombudsman, I am certain that you will recall from history that Columbus was lost when he made one famous discovery, so I suppose we cannot criticise you too harshly for a famous ‘rediscovery’. Yes, Madam Ombudsman, thank you very much. But in confirming that vote buying and selling is good and alive, can you draw from those findings some more important extrapolations?

• What percentage of constituencies had vote buying as a feature and to what extent?

• Can you give us some sort of indicator as to which political party was more involved than the other in vote buying?

• Can you say, Madam Ombudsman, that had there been no vote buying, the final results would be exactly as they turned out?

• Could it be that both political parties bought votes to the same extent that their presumed illegalities cancelled out each other?

I am not in any way placing trivialities in the spaces between the words of the ombudsman’s report. But in the end, it was like a football match that ended up as a boring draw, but the club president had to report to the sponsors that the sky was blue that day and that old reliable sun shone brightly. Plus, there was a barely felt breeze from the north.

MANY POLITICIANS MISS THE MARK

More than a few politicians from both political parties, especially the People’s National Party, have been woefully unaware of the social interplay at the heart of what may be troubled relationships (to varying degrees) between powerful men and not so powerful women.

Yes, I can understand that our male politicians are, basically, no better or no worse than the better or the worst of us. But there is a big difference. In Jamaica, a man who sets out to abuse a woman (for whatever crazy reason) will use his physical side, fists, feet, etc, to beat her down. If he is poor, he hardly has anything else to sustain his abusive power.

A powerful man in an abusive mood will dangle in front of the lady’s eyes the real effect of his stranglehold on her. He can float the idea that he can separate her from her job. He can slow down any attempt she may make to sustain herself by having his business partners or political cronies place ample brakes in her way.

Most of that is based on what he is constantly prompting. She must make her sexual favours available to him when he wants to and how often he wants to.

A 40-, 50-, or 60-year old politician who failed Tenderness 101 as a pre-teen will not take orders from any woman or girl. It must constantly be his way, the highway, or that walk along a lonely backroad to scandal, shame, and infamy.