Mark Wignall | Why many J’can men mess up relationships 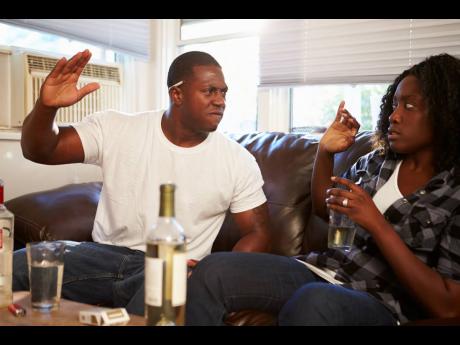 It doesn’t really matter whether he is from the rarefied air of an uptown 10-bedroom house mostly cloaked in morning fog or he lives in the afternoon stink of an urban gully bank. It is the same. He walks around being sure in the knowledge that his gonads are gilded, and that makes him extra special. Unfortunately, it seems that there are not enough people telling him that he needs to clear his eyes so that he can clearly see where he has gone wrong.

Too many Jamaican males are beating up and killing their women not necessarily because the women have genuinely created mind-bending trauma for the man, but simply because in their minds, they have been dissed. An even sadder reality is that there still exists a cohort of women, usually in the over-50 age group who have bought into the biblical narrative that it was the woman who carried sin to the world. So man, though weak, must not be held responsible.

But in our situation, there was a class and power element to it. Four generations ago, it was never exactly a secret that in every community in Jamaica, the most embarrassing scandals were family shenanigans. The poorer class were quick to understand that the rich folks could use their money power to conceal their sins. So there were only careful whispers in selected ears.

Among the poor it was, more often that not, open fights in the town square or just outside of the community church. Someone was introducing ants into someone else’s milk. War! A particular bit of ignorance that has long troubled me about our people is how, say, a couple assesses the ‘ownership’ of each other’s body. Terrible murders have taken place because a man believes that the woman who has been sexually cohabiting with him had absolutely no right to share her bodily pleasures with another man.

Think of it. I would bet that most couples living together or who are in a visiting relationship are not with the person who was the first for them sexually. On that basis, seriously, why should it trouble you, or me, if the lady wants to indulge sexually outside of our knowledge?

I jest, of course. It would trouble me immensely. Should I discover it. But the point I am making is this. This scenario. You the man came around to the back part of a section of somewhere and you came upon the lady in a fairyland of celebration when no music was in the air. What do you do? Get your mind back to the front room.

Vanessa was once raped by six men when she was 17. Since that time, she has had seven children. Just about every one of her baby fathers used to beat her, that is, thump her hard in the face, slap her across one side, kick her in the gut, and according her, one of them spat at her and threw a pot of piss over her Sunday dress.

She found solace in the Church. She was taught to read and write at 23. If Vanessa was travelling and staying overnight in every parish in Jamaica she would somehow find the time to attend church 14 times over those days.

But Vanessa did not quite see it the way her pastor viewed sex. “Him is mekking me know that a must not have sex until a get married again. Is wha wrong wid him? God gi wi di likkle something fi mek a living and him a tell me foolishness.”

It must be mortifying for those closely connected to the Church to properly place the Church’s responsibility to be not just the moral arbiter in the dozens of communities throughout Jamaica, but mostly the ethical policymakers in those very communities. Somehow, failure rings out more loudly than any significant degree of success.

Add to that Pastors being among the predators, and while it is not new, it nevertheless begs us to openly acknowledge that religion at many levels has never stored up an oversized warehouse of goodness among those protective towards those seen and brutally treated as prey.

At this stage, the ruling Jamaica Labour Party (JLP) is just about certain that ‘all things being equal’ – whatever the hell that means – it will win whatever election is called in this small island. In the interim, the JLP needs to work into its community and national logistics the very real absence of Mr George Wright, recently ejected from the JLP because of what?

Allegations of him in and a grainy video with a vehicle, a stool, and a lady worked in rhythm in a dance, and there were allegations that it took place in an alternate universe.

Mr Wright may consider going back to a farm.

Absolutely no one from the hierarchy of the JLP needs to be seen with Mr Wright. Some may be asking why am I so much against this man, some may be thinking that I am playing a holier-than-thou role.

No such thing. I simply think that Mr George Wright has proven to be much less of a man than he is of any significance as a politician. He has not found that part of him where shame resides. He has consistently failed to muster up even 10 per cent of the courage it would take to go back to his community and stand in front of them as a proud representative of the people.

There is a way for the JLP to let go of him decently. Just stand by him, but always ensure that he is at the back of all proceedings.