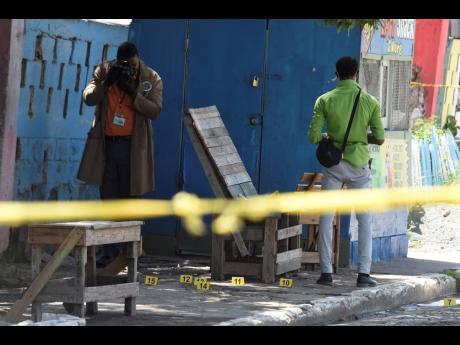 Nicholas Nunes/Photographer
In this June 2021 photo, investigators are seen processing a crime scene in Trench Town.

‘Gunmen still on top’ was the front-page blast from the April to May publication of The News, a self described a community newspaper. With a graphical attachment, the article began with, ‘Gunmen continued to hold the upper hand over the security...

‘Gunmen still on top’ was the front-page blast from the April to May publication of The News, a self described a community newspaper. With a graphical attachment, the article began with, ‘Gunmen continued to hold the upper hand over the security forces for the first quarter of the year’.

For 2021, murders at the end of March were 464 as against 445 at the same time in 2020. In 2021, shootings at the end of March were 418. For the similar period in 2020, the number was 404. In truth, those numbers can be moved to that part of our brain where it takes on a purely sterile statistic. A clash of realities exists on both sides of shootings and murders. There are, first of all, those who get to read about the pain and atrocities, and on the other hand, those who experience it. We are now at a place in Jamaica where it matters little. We hear about the shootings and the regular thousand-plus each year for so long that the shock value has long left our system.

The truth is, a society in urgent need of a radical fix cannot continue or can not build a workable and viable hope if that shock value has been long absent.

Leader of the Opposition Mark Golding has been trying to carve out a strong position for himself that criss crosses the People’s National Party and labels it Golding’s position. He knows that he risks dipping his personality in the ink of Peter Phillips and coming out on the other side as a water-colour prone to washing away. But just as the PM is forced to tout the ZOSOs as the shortest route to community salvation in troubled inner-city pockets riddled with guns, so must Golding pounce on it all and proclaim from the mountaintops that more of the same cannot change the status quo of the criminal underworld.

ROBBERS AND THE STORMS

During the passage of a most dangerous hurricane Gilbert (September 12, 1988), at least three business entities in the area of Three Miles near to the docks were broken into. Yes, that’s right. In vicious 140mph winds and 180mph gusts, thieves were somehow operating blow torches to gain entry into sections of the warehouses.

In April 1999, when rioting broke out in sections of the Kingston Metropolitan Area, young men who were, basically, wastrels of the streets descended on a supermarket and other shops in a Kingston 19 area. A man who had long claimed donship over a garrison pocket made a telephone call. He called the proprietor and suggested that he call some of the other bosses so that ‘contributions’ could be made. The don and his thugs held the unconnected thieves at bay until the supermarket boss showed up.

He opened up a side door heavily protected by sturdy steel bars. After he released many bags of rice and tinned goods, he was able to go home and relax in peace as the don ‘protected’ his place. During the passage of tropical storm Elsa, a few of those variations obtained. Hardly any thing ever changes in Jamaica.

ELSA MAY SPOIL US

In the days before a seemingly split-personality Elsa approached Jamaica, the sentiment on the streets were the usual. ‘Too much gunman dey a Jamaica. It nah come. It fraid a wi. You gwaan wait pon it. It nah come.” It has not quite dawned on many of us that the fates were aligned in our favour. Even though the forward speed and its northward path were in our favour, it slowed and took aim at us. Then it veered northwards and had its worst weather impacts in the two northern sectors. It certainly could have been worse. And I fear it may be if we adopt the same mental state should another system take aim at us.

I was 38 years of age when the killer Hurricane Gilbert devastated Jamaica in 1988. Like most foolish young people, I had never witnessed a direct-hit hurricane before and in fact welcomed the thought of it coming. A few hours after it actually arrived, I was enveloped in a state of fear such as I have never before been. I hope that many of our young may not be lapsing into that mode.

As a boy growing up in the 1950s, it was always my understanding that there would cone a day later in my adulthood when I would get married and … I am not so sure what would happen later. What I definitely knew was that all young women would get married. That was the main talk among them.

What I have discovered in the real world where the fun and fantasies of romance hit the hot rubber of an intimate relationship and its myriad problems, the label of marriage attached to pairing two people is nowhere near as important as the brass tacks.

Do you respect each other? Not as easy to attain as it seems. Do you like each other? Another big problem and not one that can be magically engineered . This may shock you, but in the crazy world of taking viability into the midst of an intimate relationship, it is much easier to fall in love than it is to discover that you have grown to like that person on the couch beside you.

I hope my lady friends will forgive me, but there are still too many of them much too invested in marriage without thinking through that thick fog of everlasting romance. By all means grab for the joys of romance and then revel in the fool that you will eventually become as you go up and down the love staircase.

Jamaica has never really been big on marriage. Less than 20 per cent of those in fairly steady relationships actually have a piece of paper with the word marriage on it. And yet, almost in contradiction of myself, I tend to trust married people more than I do those in a state of ‘livity.’