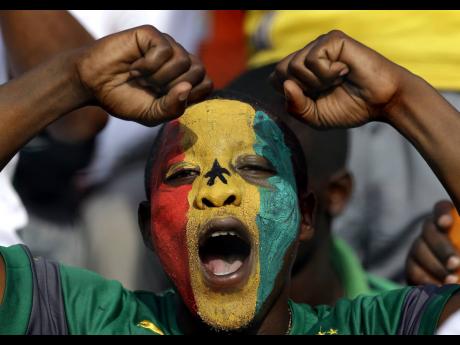 AP/ File
In this 2015 file photo Senegal soccer fan gestures during the African Cup of Nations between Ghana and Senegal. Caribbean countries, like Jamaica, can learn much from Ghana especially since there is a push to establish STEM schools islandwide. An important first step was taken this year, when the Jamaican Government appointed special investment envoys to Ghana, Nigeria and South Africa. These appointments must now follow up with results.

The Caribbean has long had a very positive relationship with Africa. From the 1960s, several countries, including Jamaica, have offered training to young professionals, advocated for development assistance and have stridently opposed apartheid.

Unfortunately, this once multifaceted relationship has become ad hoc, with occasional demonstrations of friendship. For example, CARICOM’s trade with Africa accounted for merely 3.2 per cent of its total trade globally despite commitments to strengthening ties with the continent.

Trade consultant, Junior Lodge, noted during a webinar held by the Shridath Ramphal Centre in June that most Caribbean-African trade involves the processing of petroleum products by Trinidad and Tobago.

This limited interaction can even apply to Jamaica when you examine the three bilateral investment treaties signed between the country and Egypt, Zimbabwe and Nigeria that have not been in force for over 20 years. Hence, the Caribbean’s chronic issue is its implementation deficit.

Undoubtedly, the 21st century presents opportunities for the region to successfully re-establish our cultural and economic ties with Africa. This week’s inaugural CARICOM-Africa Summit represents an important first step. However, concrete actions must be taken to ensure that there is subsequent implementation of the proposals presented.

Consequently, Economic pan-Africanism can provide a solid foundation that guides subsequent interactions. Pan-Africanism proposes that people of African descent have common interests that can be achieved with collaboration.

While this relationship has often been seen through a cultural lens, in today’s society economics presents the greatest opportunity for renewing our connection with Africa. In other words, investments have replaced apartheid as the linchpin of our relationship.

These priorities can be achieved by encouraging tariff liberalisation and attracting investments in strategic sectors. There are existing institutions that can already pursue these strategies, such as the Caribbean Export and Investment Agency. Concentrated efforts should now be made to build ties with nations, including Nigeria and Ghana in West Africa and Ethiopia and Kenya in East Africa.

The African Continental Free Trade Area (AfCFTA) is one of the most important international economic agreements that has ever been enacted. It is the largest free trade area in the world in terms of the number of participating countries and it presents major opportunities for poverty reduction and industrialisation.

Thus, Ghana is a logical first choice to prioritise engagement with as it is the headquarters for the AfCFTA. The nation has also developed a thriving environment for technology companies, which is evidenced by Twitter’s decision to establish its regional headquarters in the country.

Caribbean countries, like Jamaica, can learn much from Ghana, especially since there is a push to establish STEM schools islandwide. An important first step was taken this year, when the Jamaican Government appointed special investment envoys to Ghana, Nigeria and South Africa. These appointments must now follow up with results.

The region must also improve its ties to Ethiopia as the country is undoubtedly an economic lion and a vital partner. For example, its country’s capital, Addis Ababa, is the headquarters of a number of international organisations, including the African Union and the United Nations Economic Commission for Africa.

Additionally, Africa possesses a panoply of entrepreneurs that are redefining the continent’s economic landscape. For instance, the Igbo community is a major pillar for Nigeria’s economy due to their entrepreneurial spirit.

Impressively, they also possess a uniquely community-driven focus as mentorship is crucial to their success. Forged in the fire of Nigeria post-civil war years, the Igbo apprenticeship system has significantly contributed to their community’s increased economic standing.

Opportunities to learn from the Igbo, through business support programmes, is an avenue that can further the Caribbean’s ties with Africa. This in light of Jamaica’s efforts to encourage mentorship for micro, small and medium-size enterprises through JAMPRO’s Export Max III programme.

Furthermore, cooperation can be achieved in the financial sector through the usage of technology such as micro payment schemes. This has already been done in Kenya which uses the M-Pesa money transfer service, which is a popular avenue for sending cashless payments especially for poorer Kenyans.

M-Pesa functions as a limited mobile bank that can be used without the need for Internet connection. Given Jamaica’s high rates of account inactivity and the number of unbanked citizens, policymakers can learn from Kenya how to increase local rates of banking.

Hence, opportunities exist for the sharing of knowledge between the region and African nations. The University of the West Indies plays a crucial role in this process through the establishment of joint research centres.

Historically, limited transportation links has impeded greater collaboration with Africa. However, a number of proposals made within this year’s CARICOM-Africa Summit can ameliorate these challenges.

This includes the establishment of an airline link between Africa and the Caribbean, eliminating visa requirements and developing a memorandum of understanding that set out goals and procedures to guide the interactions between the two regions.

Going forward, more action is needed rather than conferences and meetings. If CARICOM intends to reposition itself in the global supply chain, then it is time for the region to reforge its fragmented approach to African relations with systematic relationship building.

David Salmon is a public policy and management student at the University of the West Indies and a member of Youth Advisory Council of Jamaica. Send feedback to davidsalmon@live.com or Twitter @DavidSalmonJA.