Gordon Robinson | Mash down that lie! 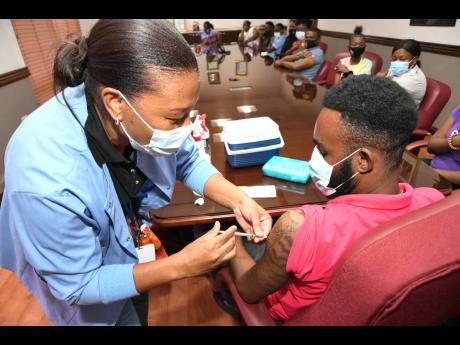 Rudolph Brown
Vaccination is even more essential than ever before as the virus mutates.

Like most Jamaicans, after 18 months of COVID, I’m just tired of it.

But what I’m most tired of is Government and many medical experts’ weak-kneed reaction to arrant nonsense bruited about by high-profile societal influencers. Many are so keen to use mind-control stratagems, akin to puff advertising by hamburger peddlers, to legally separate the feeble-minded from their money that they just can’t help themselves to stop helping themselves despite a deadly global pandemic. So they endanger Jamaica in that ignoble pursuit.

You want to taste and help yourself.

The sweetest things are there for you.

Help yourself; take a few.

That’s what I want you to do.

The problem is that none of them want love. As skilled mind manipulators, fear is their favourite tool. They use charismatic oratory to prey on our fears and ignorance. Then they offer solace but only if we drink their peculiar brand of snake oil. The want to appear demi-gods so we’ll turn to them and, for a hidden fee, be led to the Promised Land.

They often use The Bible, a well-intentioned book written 2,000 years ago by aged misogynists, to support sycophancy. They ignore context or outright misquote that revered tome. Their mission is to convince as many as possible that only they can properly interpret it so we’ll attend their Bible-thumping cabarets and, when a plate is passed around, show our fealty fiscally.

This is why church leaders twist themselves into semantic knots rationalising their objection to anti-COVID gathering limits in churches, despite how easily they could deliver The Word virtually. It’s hard to pass the plate virtually, while charging a subscription fee would expose mercenary intent and reduce sales.

the very best in life is free.

And, if you want to prove it’s true,

this is what you should do.

Just help yourself to my lips, to my arms.

Just say the word and they are yours.

Just help yourself to the love in my heart;

your smile has opened up the door.

The greatest wealth that exists in the world

could never buy what I can give.

So help yourself to my lips; to my arms

and then let’s really start to live!

But, for me, the most tiresome development in this pandramatic is the attempt, mainly by marginal church “leaders”, to create followers by preaching vaccine resistance.

One not-so-honourable twerp with a high public profile recently called on Government to stop “experimenting” on children with vaccines. If he thinks he’s a wit, he’s half right. He was referring to the recently fully FDA approved (long ago approved for emergency use in children 12 years and older) Pfizer vaccine.

For his public display of unmitigated stupidity and reckless endangerment, instead of having his dubiously awarded national honour summarily revoked, this twice convicted pastor was invited to Jamaica House for a “meeting” with the PM to discuss “topical issues”.

Many other equally brainless claims abound. A political party anxious for attention arranged “Vaccine Resistance Rallies” where a few gathered shouting “No Vaccine!” while amateur videographers captured the sorry spectacle for social media. I wonder if chanters’ sincerity equates that of “supporters” trucked to election rallies.

Another video appeared on social media featuring a lunatic-fringe, self-styled pastor at what seemed to be a Half-Way Tree bus stop shrieking “The demon corona can’t pass here. Nobody in my church wear mask and not one member is sick”. If that’s true, I suspect we can count his “members” on one hand with digits to spare.

None of these illusionists trouble me. I recognise greed is a powerful motivational force and, like fast food, addictive. What depresses me is the timid, permissive response of those in authority who allow bull crap to be disseminated without rebuke.

For example, Tiresome Twitterati’s favourite assertion is “But, if you’re vaccinated you can still catch it and spread it so what’s the use?”

The usual reply, even from highest authority, is “Yes, but it reduces risk of hospitalisation or death.”

THAT gets my goat; rubs me the wrong way; AND makes my blood boil. Why? Skilful use of “still” conveys the impression there’s no immunity difference between vaccinated and unvaccinated persons. This. Is. Not. True. Instead of going along with it, we have to mash down dat lie!

Unfortunately, studies in rates of vaccinated infections are currently limited to USA where many states, run by moronic governors who prefer pandering to an ever-decreasing political base instead of following science, have opposed mask mandates and done little to ramp up vaccinations. Even so, CDC reported that estimated rates of new laboratory-confirmed COVID-19 cases and hospitalisations by vaccination status among adults are available from statewide immunisation, laboratory testing, and hospitalisation databases for New York [linked to New York State Department of Health (NYSDH)]. They’ve also published corresponding Vaccine Efficacy (VE) rates for fully vaccinated persons across all three authorised American vaccines.

The study covered the period May 3-July 25, 2021. In May, overall age-adjusted VE against new COVID-19 cases for all adults was 91.7 per cent. This means, if exposed, there was an eight per cent chance of vaccinated persons contracting COVID, while an unvaccinated, unmasked and non-distancing individual has a 100 per cent chance of infection.

Jamaica? We flew di entertainment gate while still below five per cent vaccination so now endure 42 per cent positivity. Even CDC disowned us.

By July 25, as Delta variant took hold, that VE rate declined to 79.8 per cent which is equivalent to a 20 per cent chance of infection (if exposed) as against the same 100 per cent chance for the unvaccinated, unmasked, huddled masses. This decline in primary protection is what has driven USA Federal Government to consider booster shots for American-made vaccines. UK (preliminary only) studies appear promising that AstraZeneca vaccine provides stronger protection for the elderly and could prove effective for longer.

Now get this! During the same (May 3-July 25) period, the overall age-adjusted VE against hospitalisation was relatively stable, ranging from 91.9 per cent to 95.3 per cent. The vaccines appear at least as effective in preventing hospitalisation from Delta variant as from original COVID.

(1) Delta variant’s increased presence from less than two per cent to more than 80 per cent in USA, including New York; and

What these findings are screaming at us is vaccination is even more essential than ever before as the virus mutates. What they prove is it’s NOT as safe to refuse the vaccine as to take it. It’s possible to be infected but that possibility is exponentially lower among the vaccinated. “You can STILL catch it” is deliberate manipulation by misdirection, especially when disseminated by a national influencer who can read and comprehend.

For me, Tom Jones is among the best male pop singers ever and unquestionably the best to come from UK. Everybody knows his 1968 hit song Help Yourself. But not many know of Carlo Donida Labati (“Carlo Donida”), an Italian composer who, despite classical training in piano and composition, composed and arranged many pop songs in partnership with lyricist Giulio Rapetti Mogol (“Mogol”). One such was the popular Gli Occhi Miei which British songwriter Jack Fishman (aka Larry Khan) converted to Help Yourself by writing English lyrics unrelated to the original Italian.

Carlo Donida and Mogol also composed Uno Dei Tanti (‘One of the Many’) which you might recognise as another huge Tom Jones hit sub nom I Who Have Nothing also covered by Jamaican John Jones (often marketed as “the Jamaican Tom Jones”). Many, including Ben E. King, Shirley Bassey, Chet Baker and Charles Aznamour can thank interpretations of Maestro Donida’s songs for their successes.

Authorities must confront that mischievous, misleading, malignant “you can STILL catch it” propaganda head-on. NYSDH findings support that, to reduce hospitalisations AND new cases, implementation of a layered strategy centred on vaccination supplemented by other prevention strategies like masking and physical distancing is the only way forward.

Shouting “Demon Be Gone!” to a captive audience in the public square endangers Jamaica. Deliberately spreading falsehood about Pfizer’s vaccine as an “experiment” is classless, puerile demagoguery likely to harm national interest.

How desperate can people be for popularity, profit or relevance?