Leroy Binns | Afghanistan: How did it all come to naught? 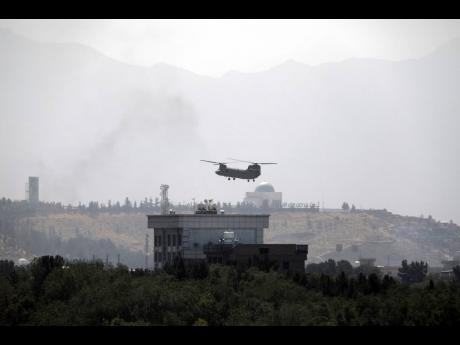 AP
In this Sunday, August 15, 2021 file photo, a US Chinook helicopter flies over the US embassy in Kabul, Afghanistan. Helicopters landed at the embassy as diplomatic vehicles left the compound amid the Taliban advance on the Afghan capital. 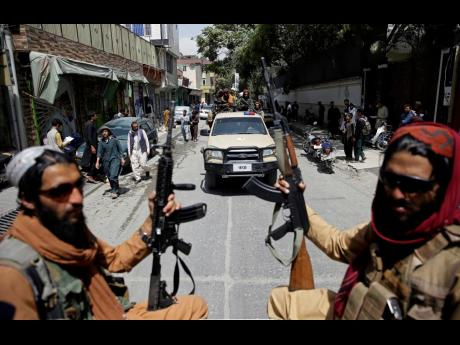 AP
Taliban fighters patrol Kabul, Afghanistan. The Taliban celebrated Afghanistan’s Independence Day by declaring they beat the United States, but challenges to their rule ranging from running a country severely short on cash and bureaucrats to potentially facing an armed opposition began to emerge.
1
2

The agonising recollection of 9/11 two decades later is exacerbated by Biden’s abrupt withdrawal of American troops from Afghanistan and a chain of extraordinary events, most notably, the sudden collapse and surrender of the Ashraf Ghani administration to its rival, the Taliban, that culminated in the largest US evacuation of 122,000 individuals to safety from said territory. As a consequence, this unofficial and unexpected transfer of power is fraught with unsettling queries among which is who should be held accountable for the reversal of fortune.

At the onset, the invasion of Afghanistan by US forces on October 8, 2001, championed an attempt to capture Al Qaeda’s mastermind, Osama bin Laden, and cripple his global outreach. In retaliation for the historic terrorist attacks on American soil, President Bush received resounding support from the international community until he was distracted with Iraq and its alleged possession of weapons of mass destruction. This incorporated a shift in military hardware and intelligence resources from Afghanistan to Iraq that in short order created a vacuum filled with an increase in suicide attacks from 27 in 2005 to 139 a year later and an uptick in detonated bombings that more than doubled to 1,677 in 2007 in Afghanistan. Regrettably, over a span of 18 years, this erroneous decision by an appraisal conducted by the Congressional Budget Office bled the US treasury of $2.1 trillion, or $6,300 per US citizen; sacrificed the lives of 4,431 fighters; and ultimately, cost Washington indispensable international credibility to prudently lead and stay the course in Kabul.

A change in presidential guardianship saw the continuation of both conflicts in which Washington, in the absence of essential global endorsement, was compelled to rely on an overextended army and that of NATO partners, many of whom prescribed restrictive precautions restricting their roles on the battlefield. As a result, an escalated crisis known for factional insurgencies in Kandahar, Helmand, and Kunar provinces and beyond, raged consistently before, during, and after memorable milestones such as the 2009 re-election of Hamid Karzai, the torchbearer of the 2004 plebiscite, a fatal hit on the bullseye Osama bin Laden in 2011, and a constitutional replacement at the helm with Ghani in 2014. This unbroken cycle of destruction transformed the American military presence from 8,000 in 2001 to a skyrocketing figure of 98,000 by 2009.

Sensing the mood of US public opinion in favour of a retraction coupled with the possibility of an unending debacle, Obama oversaw a reduction to 9,800 American personnel in 2014. He would thereafter announce an extraction for 2016 but unsuccessfully passed a menacing situation to his successor.

Trump, once in office, would later contribute to widening ripples by penalising a Western strategic affiliate Pakistan of billions of security assistance dollars for allegedly harbouring Afghan terrorists, cancelling a scheduled Camp David peace talk with the Afghan government and Taliban representatives, signing a surrender agreement between Washington and the Taliban void of a ceasefire arrangement and in alienation of Kabul’s input, and declaring the removal of American service men by May 2021. Whereas Biden extended the deadline, he likewise played squarely into the hands of the Taliban by validating haste of the abstraction from the Islamic state.

Upon closer observation, this $2.1 trillion, or as per a Brown University estimate of a $300 million a day endeavour culpable for the lives of approximately 2,500 US warriors, was infested with internal corruption. According to the Special Inspector General for Afghanistan Reconstruction (SIGAR) John Sopko, amid the utilisation of $342 million that met their seal of approval, $20 billion, by modest accounts, was misused. In 2017, a snippet of a SIGAR report revealed that $7.8 billion was lost to projects and vehicles that were abandoned or destroyed, $10 billion on a failed narcotics effort, $300 million in salaries to ghost soldiers, and $28 million on useless army uniforms. Further, the US Department of Justice has charged, and in some cases, convicted American and Afghan nationals for deceitful conduct including bribery, fraud, and conspiracy to obtain vast amounts of US currency.

This sequence of exploitation has drawn the ire of Sarah Chayes, a former senior associate at the Democracy and Rule of Law Program at Carnegie Endowment for International Peace who highlights another frightening and frustrating element. “Afghan government officials,” she opines, “would shake people down at every interaction. The massive international funding that was arriving in the country was being siphoned off or captured by government officials and their cronies, and from Afghans’ perspective, it almost looked like the United States was in favour of this system because our officials were always seen partnering with these venal Afghan leaders.”

With means inappropriately distributed, the role of partners to achieve the mission remained unclear and disadvantageous. In the case of the Afghan army, 200,000 strong, not only was there the flagrant existence of betrayal derived from a lopsided Doha agreement. but inadequate salaries and supplies, which often underwrote ineffectual attempts at success. Moreover, a lack of purpose was frequently outweighed by loyalty to individual survival and not the central government.

To the contrary, the religious militia, otherwise known as the Taliban, possessed a competitive advantage. They controlled large portions of the Afghan landscape comprising major road networks and borders with adjoining countries and a large war chest. Records indicate a Taliban 2019-20 budget of $1.6 billion thanks to benefactors the likes of Pakistan, Russia, Qatar, and Saudi Arabia that are accused by NATO allies of contributing $240 million. Such is complemented by $416 million originating from the opium trade to $160 and $400 million to $464 million extracted from taxes and extortion and mines and minerals, respectively – all of which bolstered confidence and cohesion in an effort to reclaim the federal reins. In the words of Jason Dempsey, an adjunct senior lecturer at the Center for a New American Security, the Taliban’s success can be summarised accordingly: “The Taliban proved how you fight in Afghanistan and it’s about the long-term really in-depth knowledge of local politics and the ability to understand which levers to put pressure on and how to isolate and work around in a very methodical manner local power structures.”

Disturbingly, despite varied causations, America has proven an inability to learn from prior experiences such as the Vietnamese incursion, which she inherited from the French in 1954 and now Afghanistan, which embarrassed the Soviets during 10 years of confrontation. In a state of infinite complexities, will the Taliban as well be more of the same or surprisingly charter a course elevating inclusivity, the antithesis of its religious dogma and political practices that energised its demise 20 years ago?

- Leroy A. Binns PhD is lecturer, Department of Government, The University of the West Indies, Mona (WJC). Send feedback to columns@gleanerjm.com.