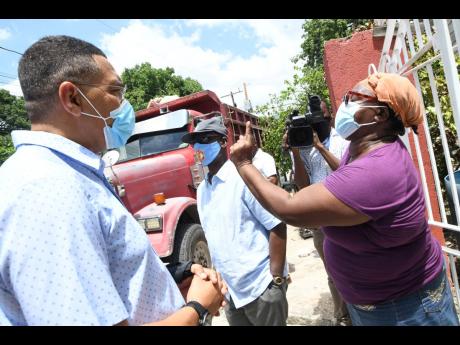 “Mark, the anti-vaxxers are causing all kinds of worries in the United States (US). I am astounded at their reasons for not getting the vaccination. As for Jamaica, our people are rugged, troublesome, hard of hearing, defiant and violent. Not a...

“Mark, the anti-vaxxers are causing all kinds of worries in the United States (US). I am astounded at their reasons for not getting the vaccination. As for Jamaica, our people are rugged, troublesome, hard of hearing, defiant and violent. Not a good group to encourage to get vaccinations. It is a hard sell. And then of course, invoking the Bible against vaccinations, most appropriately Jamaican. Our people are not easy.”

My friend is a Jamaican lawyer working and living in the US and he emailed me and gave his personal psychological assessment of Jamaicans. I totally agree with him. The big questions on the minds of policymakers all across the globe is, what is to be done to convince the vaccine hesitant to speed up their moment of decision?

Following on that they are faced with the much more problematic question of engaging with the rugged, troublesome, hard of hearing, defiant and violent who insist that they will not take any COVID-19 vaccine.

On a recent tour to show he is in touch with the people and their divergent views on vaccines, the prime minister was confronted by a woman whose religion was condensed to a basic acceptance that something in Revelation told her that she would not be taking the vaccine and that her God would protect her.

It pained me watching the prime minister speaking to her and giving in to much of her unreason, but I understood. He is the PM and he has to do it even if he had other words that could not be made at that moment.

Think of this simple reasoning. If we do good today the connecting graph tells us that our offspring will be in a much better place economically and socially when their long tomorrows arrive. In thinking of the dire urgency of the times if we should befoul the road ahead of us and propagate wrongdoing, hate and disease, we are guaranteeing them a ready-made hell. Looking ahead, it now seems as if hell as currency is not just lurking in some dark alley waiting to pounce when their tomorrows arise. It is right here now.

We who believe there is more good in us than a barking carnival of ignorance; we therefore have double duty. We must call out the present set wearing ignorance as bliss and pride and push back against them while never wavering from the time when adulthood will pay its long, troubled visit with our young ones.

LAW MUST MATCH THE TIMES

We have heard from some of our best legal luminaries, and to me it seems almost settled that the many raging moments of COVID-19 have brought our minds to the final reasoning. The unvaccinated cannot claim any privilege of freedom to walk free and be proudly unvaccinated while those who have opted on another chance of living are seeing those chances threatened.

At the simplest, an employer has as his first priority the continued viability of his business. The number one asset are his employees. Let’s say 55 per cent of his staff are vaccinated, 45 per cent are still cruising through Wonderland unvaccinated. This latter group must be faced with a harsh reality. They run the risk of not just others in the society, but at the workplace they are working against the basic interests of the business.

Plus, it must never be assumed that just because a business remains open that also means it is steady and viable. There are many medium-sized businesses which are shooting through impossible hoops in staying afloat. COVID-19 infection through the unvaccinated cannot be allowed to continue like a free-for-all.

They are constantly blazing a trajectory towards the unviability of the business. If the Holness-led government signs off on this I hardly expect that the PNP will sign off in agreement. According to my lawyer friend, a People’s National Party (PNP) supporter, ‘The PNP would be foolish to give in to that because that is a hot-button issue for them to probe and see if it has any life in the political space.’

I see where the PNP is still burdened with embarrassingly low ratings in the NNN/BlueDot poll. Anxious to pounce on just about anything, one PNP MP has taken on the five per cent increase in the price of chicken. This I find comical because months ago many logistical shifts in shipping out of China, the upping of its manufacturing and the increase in grain and freight rates had immediately affected any steady price of key linkages in the poultry market.

Actually, I was expecting about a 7.5 per cent increase. v

The Holness administration has not had an easy run with the perception of corruption hanging over its head and that is showing up in the polls. Many Jamaicans are of the view that regulatory agencies are key culprits.

A few weeks ago I was in the company of two men, retired civil servants. “Once yu put a man in a position and his job is to sign off on a paper to give you permission to do something, like a licence to engage in a certain business, or something simple like adding a room to your house, I know some of these people.”

The other man finished up with, “He is saying to himself, I can make life hard for this man, or I can make it easy for him if he pays me something commensurate with his urgent needs. Deals are always being cut and it is widespread.”

The public trust the people had in Holness, I believe, was shattered over the Reid/Pinnock matter. Many people saw Reid as a rising star in the Jamaica Labour Party (JLP) administration. Unfortunately, I do not think that corruption as a single issue will ever dislodge either this JLP administration or a future PNP government. Unless, of course, the government is falling down on all fronts and the corruption issue was just the last straw.

One suspects that when the relative party strengths are measured, the PNP will not be found fit to tackle the ruling JLP either on the political battlefield or in a pillow fight.

- Mark Wignall is a political and public affairs analyst. Email feedback to columns@gleanerjm.com and mawigsr@gmail.com.