Patricia Green | Road woes and development – who is responsible? 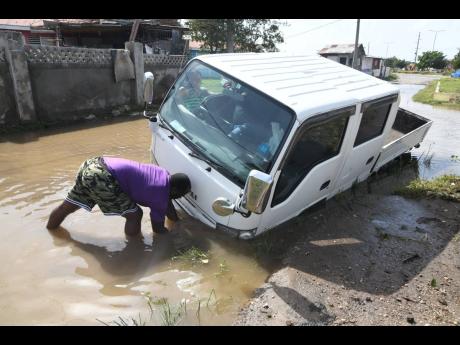 Rudolph Brown
A resident of Callaloo Mews, St Andrew, affixes a chain to a disabled pickup van on a flooded road in the community after the passage of Tropical Storm Grace. 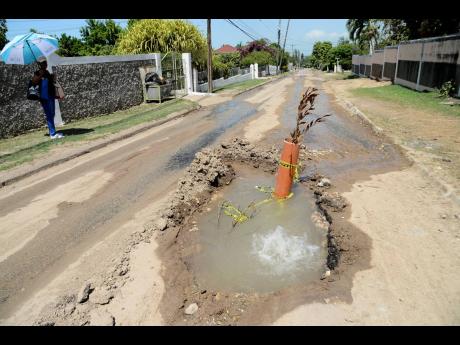 File
In this June 2019 photo, a section of Charlemont Drive in Hope Pastures, St Andrew, that was dug up by the National Water Commission to repair a water main. In August, newly reinstated roadway collapsed, exposing recently laid sewerage lines. After various filling attempts, rains would scour it, exposing gaping potholes. 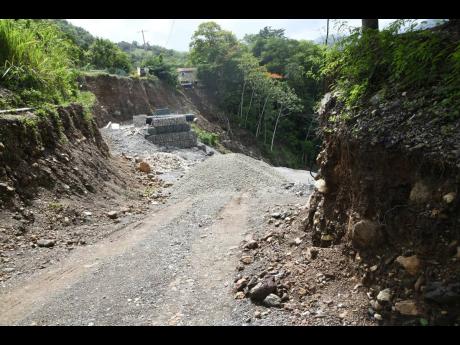 File
A section of the Trinity Ville main road that was cut off years ago in Mount Lebanus in St Thomas.
1
2
3

What, ‘Sweet relief as Gordon Town Road brand new’ was the headline in The Gleaner of September 13 about its reopening. Many congratulations to all who worked assiduously to make this happen. Was this record time? There is much good that still abounds, and this road reconstruction project should be celebrated.

This good news came, however, amid continuous cries of woe over roads connected to high-rise building developments, and highway developments.

Should high-density apartments be approved without sewerage lines in place for their development? If approval is granted without, then the developer is obliged to connect at his/her expense to the nearest sewerage system, so who monitors the developer? With multiple entities, National Environment and Planning Agency (NEPA) for issuing development approvals, National Water Commission (NWC) for sewerage systems, National Works Agency (NWA) for roads, who ensures satisfactory road and kerb wall reinstatement? Citizens cry, who is responsible?

On the weekend, I travelled along Spanish Town Road, the major thoroughfare between Kingston and St Catherine. Motorists and pedestrians are being redirected. Why? One agency is laying pipes to improve water supply in the city, while another has issued a contract and waiting on the other to finish before commencing culvert work for drainage improvements. Reading The Gleaner of June 3 and 18 begs the question – who is responsible?

Driving on Marcus Garvey Drive, I was grateful it was not raining, therefore liable to flash flood. I recalled similarly citizens in Salt Marsh, Trelawny, inundated after highway construction. Over these, read first The Gleaner of November 15, 2018, ‘Delay with the drains – NWA moving slowly in its effort to prevent Marcus Garvey Drive flooding from reoccurring,’ still flooding today. Then, see The Gleaner of August 22, 2018, ‘$40 million NWA road project in Trelawny,’ stating “…the projects involve drain cleaning, the construction of ‘U’ and ‘V’ drains; the installation of culverts; and the reshaping and the asphalting of roadways...”.

Citizens continue begging for flooding issues to be avoided; but – who is responsible? In Clarendon, The Gleaner editorial of August 28 said, ‘Highway construction triggered Toll Gate flooding, say officials,’ quotes Lothan Cousins, “…the water runs north to south and the highway runs east to west. The highway therefore will block the water from getting to the sea in the south if there is inadequate drainage…”. Additionally, from Uphell Purcell comes, “…the water is pushing back ... it doesn’t have anywhere to go. The highway persons have to make certain that they look at the situation now and make sure they get some outlets across the highway to move the water as quick as possible…”. Mark Trought commented online after this editorial, “…Why build drainage just now? It should have been the precursor…”.

The University of Technology, Jamaica has trained their graduates well for the built environment sector. Many bemoan an inability to practise, implement, and manage development project issues judiciously.

Agencies are obliged before commencing whether proposed developments should be allowed, and under what conditions by conducting an ‘Environmental Impact Assessment’ (EIA) to include dialogue with citizens. These take many forms, conducted by a community, national entity, or international concern. EIAs identify, predict, and evaluate potential environmental impacts of development proposals. The NEPA website carries, ‘Guidelines for Conducting Environmental Impact Assessments,’ 2007. This EIA is the report of potential controls to direct sound decision-making. Citizens are impacted whether titled landowners, living on ancestral lands pending title regularisation, or informal settlers.

It is noteworthy that St Thomas is receiving highway development; however, its citizens are asking for mitigation from their hardship and distress in the process.

Around 4 o’clock Sunday morning, reported The Gleaner, citizens were awakened by a rumbling sound, which later proved to be loose rocks from the hillside invading their space via floodwaters in ‘Rain spells nightmare for Grants Pen’ on July 6; “…because dem dig off the hillside, so when the water come down it come down with mud and everything…”.

Over in St Thomas, the Office of Disaster Preparedness and Emergency Management (ODPEM) declared Trinity Ville particularly vulnerable and prone to landslides, flooding, and bush fires. The parish also is an epicentre for earthquakes, with ‘Judgement Cliff’ listed by the Jamaica National Heritage Trust (JNHT) as a massive landslip caused from the 1692 earthquake that placed parts of Port Royal under the sea. Rivers there may trickle in dry seasons, sinking into their rocky channels, but they may become raging torrents during moderate rainfall, and springs may flow during the wet season, reports US Army Corps of Engineers Mobile District and Topographic Engineering Center in ‘Water Resources Assessment of Jamaica’ (2001).

Theresa Rodriguez-Moodie, ‘Bull Bay – a sacrificial zone?’ in an article in The Gleaner of September 11, skilfully expounds on the gypsum quarry operated since the 1940s that closed in 2010 under Cement Company of Jamaica ownership. This quarry continues to be the source of siltation in the rivers and generates landslides, flooding roads. Citizens of Bull Bay contacted the Jamaica Environment Trust (JET) who listed Mines and Geology Division (MGD), Natural Resources Conservation Authority (NRCA), NEPA, and Ministry of Local Government, left Rodriguez-Moodie asking, “…who is responsible?...”

Citizens for years have written to NEPA, municipal corporations, NWA, NWC, the prime minister, members of parliament, caretakers, and others as climate change intensifies rainfall, flooding, and earth movements across communities.

The Gleaner interviewing citizen of Grants Pen in St Thomas reported, “…right now to how technology and life advanced, we nuh really want to have to resort to that [mounting roadblocks]. We would rather put it on pen and paper but if we have to go back to that style, we can do it, we know how to. We just trying to show that we have grown past that stage but it look like it going to reach to that…”.

Patricia Green, PhD, is a registered architect, former head of the Caribbean School of Architecture in the Faculty of the Built Environment at University of Technology, Jamaica. Send feedback to patgreen2008@gmail.com.