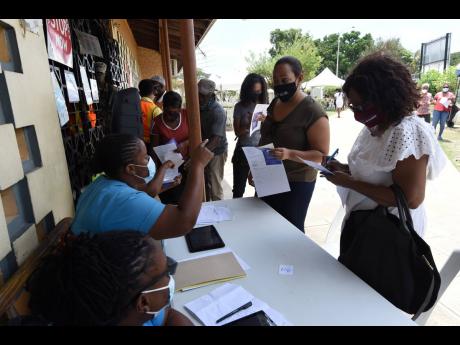 Ian Allen/Photographer
For months, it has been inconvenient, expensive and uncomfortable to be vaccinated. Vaccination sites were inaccessible to most; opened mainly during working hours; and staffed by strait-laced members of the moral police who turned away many anxious pro-vaxxers for ridiculously priggish reasons, including too short shorts; sleeveless blouses and, perish forbid, turning up a day BEFORE second shot was due. 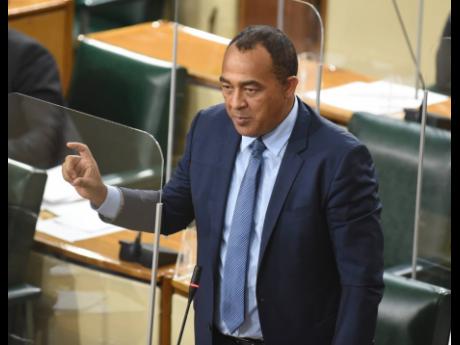 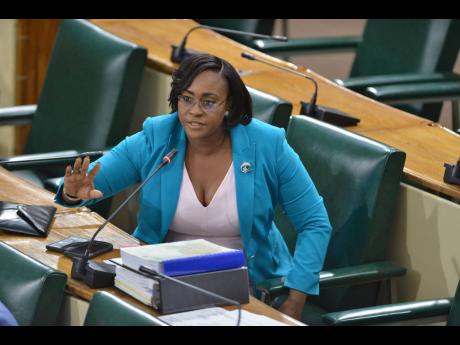 Despite Juliet’s best efforts, this cannot be blamed on ministry technocrats as, for two months, NOBODY from Cabinet complained bureaucrats were breaching policy or issued directives to stop.
1
2
3

It seems the combined Houses of Montague and Capulet are discombobulated, leading Juliet to leap to Romeo’s defence, blaming bureaucrats for eloping.

Really? Seriously? Bureaucrats went against government policy? Sure. And I have a flat piece of property in Bog Walk for sale.

• UNESCO estimates Jamaica has 233,000 secondary school students. If correct, 208,260 doses could’ve fully vaccinated a half of all students between 12 and 18 in time for face-to-face classes to return in September.

• Teachers were on an earlier priority list. Those not already vaccinated could’ve been given the choice to use up AstraZeneca supplies Government knew would expire September 30 or teach online.

Why are we giving any credence to Juliet’s blame-game? Those of us not tribally blinkered can see, hear and KNOW administration of Pfizer to adults when AstraZeneca was available wasn’t done in secret. Not a single word of demur came from Health Minister Christopher ‘Criss Tufftime’” Tufton or anyone else in Government until the “anticipated” second Pfizer shipment didn’t arrive.

Suddenly, Tufftimes was before cameras (his best friends) admitting adults were given Pfizer doses because he “anticipated” the arrival of the second shipment in time for him to bat clean up like Andre Dawson.

There wasn’t a hint ministry technocrats had done anything wrong. On September 15, 2021, JIS published the following report:

“Effective Wednesday (September 15), administration of the Pfizer vaccine will be suspended until a second shipment arrives from USA within the next two to three weeks.

Minister of Health Christopher Tufton … informed that … 179,915 doses of the Pfizer vaccine were administered. Of that number, 143,039 were first doses and 36,876 were second doses…”

It’s been more than three weeks with no sign of a Pfizer ship on the horizon. 143,039 Jamaicans are left high and dry. Only 36,876 are fully vaccinated with Pfizer.

We. Could. Have. Vaccinated. Over. One. Hundred. Thousand. Students!

This is yet another example of spineless government determined to kowtow to whoever can hand it a political advantage, even if it means abdicating its responsibility to manage vaccine roll-out with vision, purpose and decisiveness. From the outset, vaccine roll-out has been treated like grocery shopping. If you build the market, they will come.

“Currently in Jamaica, Madam Speaker … we recognise that as part of the country’s response to the pandemic, vaccination is crucial.”

But, for months, it has been inconvenient, expensive and uncomfortable to be vaccinated. Vaccination sites were inaccessible to most; opened mainly during working hours; and staffed by strait-laced members of the moral police who turned away many anxious pro-vaxxers for ridiculously priggish reasons, including too short shorts; sleeveless blouses and, perish forbid, turning up a day BEFORE second shot was due.

On September 28, Tufftimes said he was “open” to the idea of partnering with private entities to bring vaccines closer to the people. Six months after the first doses arrived, Government is only NOW talking about diversification of roll-out to make it easier to be vaccinated. And Tufftimes still “talking” and “discussing” (favourite strategies), while MPs boast about setting up permanent constituency sites and employing town criers?

In the meantime, anti-vaccine preachers convince flocks to depend on the blood of Christ (shed and dissipated 2,000 years ago); nurses refuse the vaccine while continuing to treat non-COVID and COVID patients alike without economic consequence; and some doctors advocate “natural antibodies” alone to fight the disease.

Despite Juliet’s best efforts, this cannot be blamed on ministry technocrats as, for two months, NOBODY from Cabinet complained bureaucrats were breaching policy or issued directives to stop.

“Minister of Health says Jamaica is to receive its first shipment of 200,000 doses of Pfizer vaccine on August 17, with children and adolescents to be given priority access …

Dr Tufton said the ministry will begin administration of these vaccines on August 23 at all vaccination sites.

“We saw a number of students coming in to get vaccinated, some with their parents, guardians and we did have some walk-ins – persons who were not on the priority list – and we tried to accommodate them as best as possible. I think we closed the day with 13-14,000 persons, which is a reasonable day.”

On that same day, desperate for relevance as usual, PNP again unveiled its political strategy of calling for what was already happening.

Observer, August 22: “PNP spokesman on health and wellness, Dr Morais Guy, says Government must make accommodations for parents and their children to be vaccinated at the same time.”

Sigh. Morais, Tufftimes way ahead of you. This happened all day Saturday, August 21. This was not only obviously Government policy but PNP was fully on board. So spineless Government, endorsed by irrelevant Opposition, sheepishly hid beneath Pfizer’s skirt instead of insisting adults were to get AstraZeneca. Anybody who wanted Pfizer got Pfizer. Nobody, including PNP, uttered a word in anger.

On September 14 Tufftimes explained why:

“….it’s better for someone to have a single dose, particularly in the context of community spread, than to not have a dose at all, rather than to hold and then administer to those who have had a first jab and denying others who could’ve had a first jab and benefited from some amount of protection.”

Your head spinning also? That’s what spin-doctoring will do for ya!

(2) August 21: Tufftimes announces about 13,000 people, mostly students, were administered first Pfizer shots. Not one word from him about any breach of any policy.

(3) August 21: PNP, chasing its own tail as usual, calls for adults to be “vaccinated at the same time” as children. Not a word from Tufftimes about policy breach or from PNP that giving adults Pfizer was wrong.

(4) August 21-September 13: Government hands out Pfizer doses like candy to young and old alike. Not a whisper about any policy breach.

Now, suddenly, bureaucrats, operating for two months under the nose of a publicity-loving minister who NEVER complained, are blamed.

Pshaw! The shameful, cowardly, stubborn refusal to accept responsibility for anything that goes awry in this pandemic mismanagement potpourri (especially after opening wide for entertainment interests) is pathetic. Obviously, administration of Pfizer vaccines to adults wasn’t done by rogue bureaucrats on a frolic of their own. The only logical inference from everyone’s conduct is it was at least tacitly approved by at least Tufftimes.

Jamaica has fully vaccinated less than 10 per cent while dumping 56,000 vaccine doses with tens of thousands more to be dumped October 31 and November 30. Something’s cockeyed somewhere! Something (or somebody) must change.

If we continue to keystone cops this vaccine roll-out because Government won’t take tough decisions; if this absurd story of rogue bureaucrats causing the Pfizer-to-adults scandal is true; then God help us because we’re living in an asylum and the lunatics are in charge.