Mark Wignall | Scary times for many 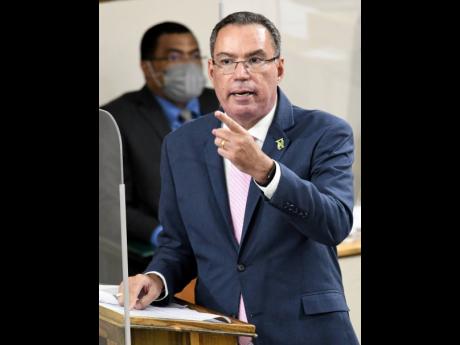 Daryl Vaz is right on track

It was just last Tuesday when she glimpsed outside her bedroom window and saw the car. And the three men. She lived way up in semi-rural St Andrew. It was not yet 8 a.m.

The car was ‘parked’ near her gate and the bonnet was up and, strangely, none of the three young men were all that interested in trying to figure out what particular problem had landed the car almost dead just by her gate.

She knew that her husband was up. From about 6:30 a.m. She couldn’t even manage to fit on her slippers before she flitted over to his early-morning spot. His music room, and his place for, as he called it, cleaning out the garbage of yesterday and introducing new ideas for the new morning. They spoke and he looked to the cameras.

All the three men were nervous. They all were busy on cell phones. The husband reached for his two licensed firearms. He chose his big bird gun. A monster of a shotgun. He descended the two floors and went by a back door. As he reached to gate level, two bursts. One man jumped to the front of the car and with his head held down low, slammed down the bonnet. One man started the car and they all drove off.

Ten minutes later, against all odds, they came by, engine off, coasting down the hill. The police had been alerted but, so what.

Wednesday early evening. Her large iron gate somewhere in Meadowbrook was fully open. The young man boldly walked in. He knocked on the verandah grill then furtively looked behind him, to the sides and all the while shifting his weight from one leg to the other.

Another man approached the gate and at that, the man at the grill ducked and ran to a side of the house and to the back.

The young woman inside did not read the play as the man at the gate tried about three times to explain to her that a man had told him to “pick up a phone. I paid $15,000 for it and was told to come here!” By that time the first man had made his way over a fence, and had disappeared into the Kingston 8 mango backyards.

One man with a big gun. He can drive away the dangerous goons for now. One helpless young woman holding a bag of fear in her hands. What happens when they come back? Call the police? Don’t waste taxpayers’ money.

Much of the criminality that we are hearing about is not officially on the police blotters. It is the type that occupies silent talk in many communities and the hope that when the conversation is completed no one will really tell the perpetrators who told who what. Fear is the great silencer or else much more would be exchanged.

MINISTER VAZ IS ON THE RIGHT TRACK

Minister of Science, Energy and Technology Daryl Vaz is not one of those government ministers who tend to talk empty. Recently in his Sectoral presentation in the House, he basically outlined a scenario where 196 public schools are to be connected to broadband network for the next school term. He said that it was to be carried out under the first phase of the overall US$237 million National Broadband initiative, which aims to have every household and every community connected to the Internet by 2025.

I have never been truly convinced, either through smart expenditure or a real concern of our lawmakers, that they are serious about tackling a broad information reach among our poorest people and bringing them to the best that they can be. In other words, creating a big space that involves those of us who want to be more that just penny-pinchers in the new Jamaica.

About seven years ago I travelled to a deep-rural community to visit a small primary school and its teaching and administrative staff. I still cannot rid my mind of the deep concern the teaching staff had for the future of the many bright children there, even as they knew that there was little that they could not attain were they exposed to all of the digitised world.

Many of these schools are basically ‘forgotten’ in the bigger space of the fancy brand-name schools in the Corporate Area and in special urban areas until one student emerges from ‘dung a gully bottom’ school.

Minister Vaz has the clout and the energy to get this done and many of us are waiting on him.

A few days before he was shot dead, the big man in transport and I had been talking on the phone. He didn’t tell me where he was but I can remember that I was at a little four-stool joint at the top of Cassava Piece.

We only touched on extortion, and at the time it came up in the conversation I can remember that it was my view that until it could be totally eradicated, the system would have to work with it until it could be worked against and eventually strangulated.

That very same day that we spoke a well-known rural-area lawyer attached to one of the two main political parties walked into the joint after I had finished my long telephone conversation. Half an hour later I asked him, “How can you know when the funds that you have collected from a client that you know is dirty and rotten is clean funds or washed?”

“Mark Wignall, I don’t know if you are recording me or what. We lawyers never ever collect dirty money,” was his reply.

Two other men in the bar, one a businessman who had his company’s head office downtown, and an accountant, laughed out heartily.

The businessman had earned his bona fides. Two of his fingers were missing after a thug, seeking extortion, had blown then off. A few years later when the thug was killed by his cronies, he invited me to sit with him and sip over the criminal’s demise.

It occurred to me then that we had choices. Pick the side of the worst. Or those more powerful than the worst of us.