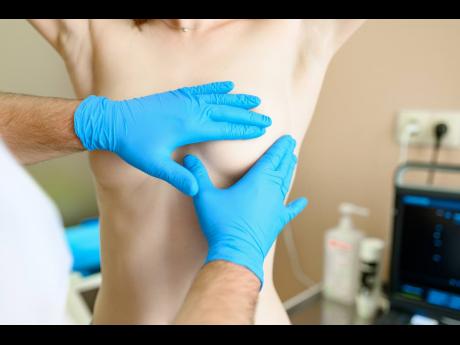 Breast cancer is a real diagnosis and possibly curable when diagnosed at an early stage.

Breast cancer is a significant public health concern in Jamaica. It is the most common cancer affecting women. It represents a substantial threat to healthcare resources and, most important, patients’ quality of life and, ultimately, survival.

Interestingly, despite more women in these affluent regions being diagnosed with cancer, most of them will be alive five years after their diagnosis compared to poorer or developing countries.

Based on this data, many, with good reason, have described breast cancer as an upper-class woman’s disease, with almost double the number of women being affected in more affluent countries.

Affluence is often synonymous with better or high socio-economic status and, therefore, greater access to healthcare resources, including available screening and adequate and often costly intervention. Ready access to screening, whether motivated by cost or education or general awareness, means earlier detection of breast cancer at a time when surgery and interventions to cure can be safely and effectively embarked upon.

Early detection means less advanced stages at diagnosis and, therefore, better local control of breast cancer and prevention of spread. This, added to purchasing and procuring advanced and often costly medication and therapeutics, means significant opportunity for cure and improved outcomes. These two factors alter the outcome for these women in the most important way – they live longer.

The converse is true. Less affluent women who do not have access to these opportunities present late with more advanced diseases that may have already have spread to other organs. The underlying and unsettling truth is that poverty and other factors associated with lower socio-economic status limit the detection of the disease. When it is detected, a cure may not be an achievable goal.

These other factors include differences in education which may influence attitudes, beliefs and misconceptions, race, location, income and access to money via insurance or no-insurance routes.

1. Education: Lack of knowledge and information regarding breast cancer still plague multiple regions. Not only does it affect health-seeking behaviours, but it also drives psychological fear. Even though breast cancer is a well-known disease and screening has positively affected mortality, many patients will not seek screening due to a genuine lack of knowledge.

2. Patient’s attitudes, beliefs and common misconceptions: There are many traditionally held ideas, preconceived notions and myths regarding breast cancers. Myths such as “mammogram and breast trauma cause breast cancer” and “breast cancer always present with a lump” are frequently voiced.

There is an ongoing fear of chemotherapy and radiation therapy and a preference for natural or herbal medications. The belief that cancer may represent “obeah” and best addressed in this setting also means delayed presentation and delays in receiving appropriate treatment.

Debunking local and societal myths about breast cancer is essential. Otherwise, these myths will continue to be a barrier to timely detection and treatment.

3. Race: The contribution of race to socio-economic status is twofold and considered to be complex. The non-Caucasian race has been traditionally linked to poverty. There is also a direct association between race, access to medical care, and the quality of medical care. Multiple writers have determined that Asian Americans and Black Americans are healthier than their counterparts. However, they still demonstrate worse outcomes likely related to access to care and poverty.

4. Location and environment: There is a geographic variation of healthcare between countries and often within countries. This variation in healthcare is affected through multiple avenues; increased patient to doctor ratio within facilities; mean longer waiting times; delay in accessing screening and diagnostic tests even in the setting of free healthcare, access to government resources, availability of certain aspects of treatment. The division of few resources among many patients mean less availability of resources in a timely manner to effect timely care and therefore improved mortality rates.

5. Personal access to money: Having access to money, whether through insurance routes or non-insurance routes, offer opportunities for advanced medications and treatment that leads to greater survival times – including chemotherapy, genetic testing and newer biologic agents. The ability to afford may mean educating and adjusting behaviours to ensure that breast cancer is effectively treated.

What does this mean in our local setting? The factors discussed here, and their impact on breast cancer care can undoubtedly be seen among parishes and regions throughout the island. Education is essential to assist in increasing awareness and debunking societal myths among women throughout the country.

Breast cancer is a real diagnosis and possibly curable when diagnosed at an early stage.

- Dr. Patrick Roberts is a consultant surgeon at the University Hospital of the West Indies (UWI), Mona and Dr. Kemba Peters is a resident surgeon at UWI. Email feedback to columns@gleanerjm.com