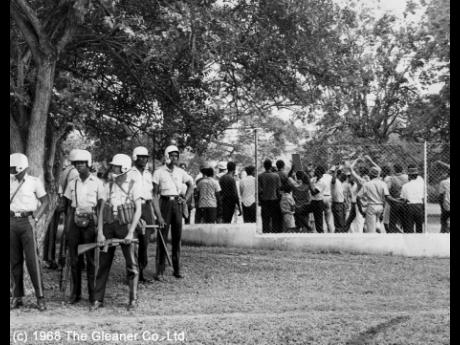 Gleaner Archives
In this 1968 photograph, police and military occupy the UWI Mona campus as students demonstrated against the exclusion from the island of lecturer Walter Rodney. The students protest sparked off vandalism in areas of Kingston. 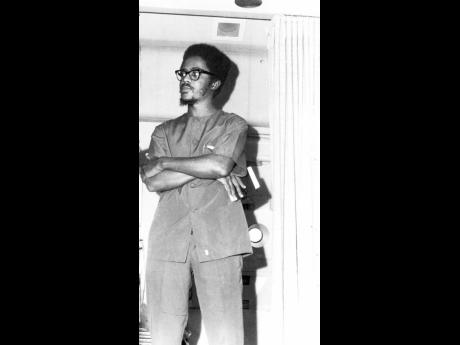 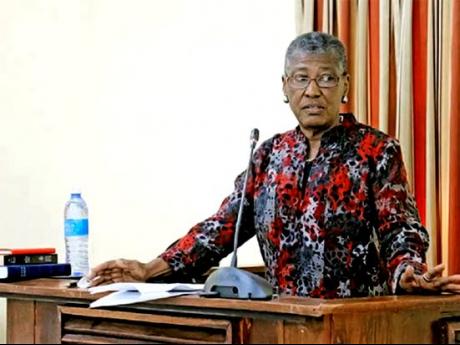 In this edition of Reparation Conversations, a collaborative initiative between The Gleaner and The University of the West Indies’ (UWI) Centre for Reparation Research (CRR), we highlight the reparation agenda laid out by the widow of Walter Rodney, Patricia Rodney, who delivered the 23rd Walter Rodney Memorial Lecture, hosted by the Institute of Caribbean Studies (ICS), at The UWI in partnership with the CRR, on October 15. Her analysis strengthens the call for national (internal) reparation alongside external or international demands for historic and/or contemporary injustices.

“Reparation now” seems to be the clarion call associated with the movement for reparation for native genocide, the transatlantic trafficking in enslaved Africans, chattel enslavement, deceptive indentureship and their lingering legacies. The most recent call for other forms of reparation to be considered came from Dr Patricia Rodney, the widow of the late, great, pan-African Historian and scholar-activist, Walter Rodney. In addressing the audience at the 23rd annual Walter Rodney Memorial Lecture, she highlighted the need for internal reparation for the injustices suffered by her family during and after what is now known as the “Rodney Riots”.

On October 15, 1968, the Jamaican government declared Dr Walter Rodney persona non grata on grounds of sedition; and refused to allow him to re-enter the island after he returned from a Black Writers Conference in Canada, leaving his family stranded in Kingston. The news filtered through to staff and students at The UWI, where he was employed as a lecturer in the Department of History, the next day, October 16, and led to the students marching in protest. What was intended to be a peaceful protest morphed into a riot involving a wide range of Jamaicans, mostly the dispossessed, among whom Rodney was a beloved community teacher. The “Rodney Riots” was met with heavy pushback from the police and many protesters were tear-gassed, resulting in the students retreating to the Mona Campus.

After relating the context of the ban, the actions of the Jamaican Government of the day, and the impact of the banning of Walter Rodney on her family, Patricia Rodney issued a call for internal reparative justice.

Before setting out her claims, Dr Rodney reminded the audience that reparative justice seeks to repair (in some way) the harm done to victims, as a result of human rights violations. It is a way of thinking about justice for those who have been harmed with a view of repairing the harm, stopping present harm and preventing future harm. The bases of her claim for reparative justice for her family are set out below:

This declaration was seen as a denial of Walter Rodney’s due process, as there was no hearing, interviews or statements taken to justify this action. Jamaica’s actions made Rodney an unwelcomed visitor in other Caribbean countries and delayed his journey to Guyana in 1974. Trinidad and Tobago kept the family several hours at the airport before they were allowed to attend the Caribbean Council of Churches Retreat in that twin-island republic. He was also refused entry into Antigua and Barbuda, and Grenada.

The ban on Walter Rodney imposed by the Government of Jamaica under the Jamaica Labour Party is still intact 53 years later. Neither the JLP nor the PNP has ever lifted this ban.

Walter Rodney lost a year of employment before being reappointed in Tanzania from where has had been recruited to teach at The UWI. There is no recall by the family of him receiving his last salary from The UWI or being paid for the two remaining years of his contract.

At the time of his ban from re-entering Jamaica, Walter Rodney was working on several papers, lectures and articles that he and his family have never retrieved.

5: Dislocation of the family

Rodney was forced to be away from his family in Cuba for 3-4 months. His second child was born in his absence, causing significant hardship on his wife and family.

Most of the Rodneys’ household and personal items were left behind due to the need for the remaining Rodney family members to leave the island of Jamaica at short notice.

The criminalisation of Walter Rodney and the labelling of him as a communist and extremist had significant impact on how he was viewed in the ‘eyes of well-thinking members of society’. His so-called “crimes” were that he associated with Rastafari and other so-called “criminal elements”; posed a danger to society, planned to destroy brown people and their assets and instigate the burning of the UWI campus. All myths.

At the time when the Government of Jamaica banned Walter Rodney from re-entering the country, his wife was four months pregnant, and said to be alone and traumatised. At the ‘Riots”, she recalled being tear-gassed, and placed on bed rest for a week. Their son was left without his parents for the first time.

Dr Patricia Rodney’s education was disrupted due to the happenings of October 1968. In having to leave Jamaica in a hurry she also had to leave UWI where she was enrolled as a student. It took eight years after that for her to resume studies.

The banning of Walter Rodney resulted in a denial of the opportunity for the people of Jamaica and students at The UWI, in particular, to be educated about their history and to have a forum to discuss ideas.

FROM RASTAFARI TO RODNEY

The reparation movement, then, is not just about claims to the former colonisers, but also about embracing the mandate for internal reparation where the need arises. Jamaica has already set a precedent by answering the call for compensation by Rastafari who were brutalised during the Coral Gardens Massacre of 1963.

The sum paid may not satisfy Rastafari, but it is an indication that the State, under different leadership (albeit the same political party), understands the need for post-independent regimes to live up to their obligations when atrocities are committed under their watch. The Rodney family, therefore, demand: an acknowledgement of the wrongdoing; an apology by the State to the family as well as (along with reparation) to the families of those injured and killed; an apology to the people of Jamaica; a lifting of the ban on Rodney (posthumously) to show that the decision made was not the correct one; an end to the silence on Rodney and formal recognition of his contribution to Jamaica and the region.

This latter action can be done through the use of his work in all educational institutions as, according to Dr Patricia Rodney, “a knowledge of history can avoid repeating it and also to understand and improve our conditions”.