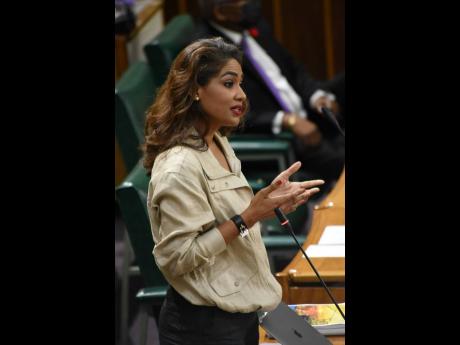 Public Enemy Number One in all “Developing Nations” is corruption. EVERY national failing and social evil stems from that root.

Jamaica's economy is stagnant because fiscal and monetary policy is often corruptly implemented. Government contracts are handed out like candy based on cronyism. Cost overruns are endemic for the funding of political kickbacks to party/party officials. Major infrastructural work contractors budget for “extortion” – the economic fuel running the engine of organised crime (and its political linkages). Inflation is what Bank of Jamaica (BOJ) says it is, no matter how unrelated to your shopping basket and its interest rate policies relate to one Jamaica but not the other.

Murder rates and violent crime have grown exponentially because Jamaica Constabulary Force (JCF) is riddled with corruption. Gang members in police clothing protect gangs; terrorise law-abiding citizens; and execute rival gang members. So a government out of ideas and lacking the will to de-corrupt JCF turns to unconstitutional states of emergency (SOEs) as common as garden crime-fighting tools so it can deploy Jamaica Defence Force (JDF) to do JCF's work.

Real emergencies aren't born, nurtured and kept in parents' home for 45 years. SOEs are constitutionally created to address sudden attacks on the State by war, natural disaster, terrorism or pestilence (for example, a global pandemic that killed 2,000 Jamaicans during the same period the country recorded less than 1,300 all-purpose murders). Individuals killing other individuals for domestic reasons (including gang rivalry) can't constitute a SOE. Depending on the increase, it can constitute a state of police incompetence.

So the declaration of military rule disguised as SOE jump-starts a dumb, selfish, irritating, endless political poker game played with chips that have zero value to ordinary Jamaican's safety or welfare. Local government elections are due in three months. Voters are bawling for rescue from rampant gunmen. Government knows there's no quick fix so imposes SOEs, knowing full well PNP's knee-jerk reaction is likely to be a political penis-measuring contest ending with the Senate blocking any extension beyond the initially permitted 14 days. SOE or not, islandwide murder rates are sure to soar but Government would be able to blame the increase on PNP. Watch as PNP falls into the trap like rats recklessly seeking cheese; suffers electoral oblivion in early 2022; and allows Nero to effectively bypass the Senate while burning Rome to the ground.

Meanwhile, government hacks consistently insult our intelligence and bait PNP with nonsensically contradictory arguments that SOEs “work” while admitting they're short-term remedies only. Well, kiss my red, wrinkled rungus kungus mi nungus! To “work” a strategy MUST be sustainable. We had SOEs for two years yet murder rates continue to rise. So, obviously, SOEs don't work. What long-term remedy has Government implemented or even devised to reduce murders? Does PNP have one? Or is PNP satisfied to just carp and complain? What about us? Are we willing to endure an indefinite police state run by a military junta?

Public health is in a state of “chronic” because of corruption. Healthcare infrastructure has been neglected by successive governments with their noses in too many other troughs to care. One glaring example of this (there are many) is Cornwall Regional Hospital which was built on a flawed, diseased model and allowed to fester for decades until it threatened to infect and kill all who entered. Then our corrupt governance system proceeded to throw taxpayers money around on “refurbishing” contracts until, FOUR YEARS LATER, with nothing accomplished, we're told we need overseas competence.

Overseas, schmoverseas! Market me with a rusty spanner! What was needed from day one was a governance system of transparency that discouraged and punished corrupt practice instead of one that promotes laissez-faire and secrecy.

All major hospitals are decrepit. Public healthcare workers are scandalously underpaid and overworked. FOR YEARS many aren't even paid gratuities or overtime promised by government. Meanwhile, maybe in unrelated incidents, connected party members, cronies and hacks get their share of a rapidly shrinking pool of scarce benefits and spoils.

Why is our healthcare, economic and national security infrastructure and personnel so inadequate? It's NOT the economy. It's the corruption, stupid!

Corruption can only be tackled systemically by reconstructing Jamaica. This was recognised by Norman Washington Manley soon after he helped “negotiate” our Independence Constitution drafted by former Colonial Masters and was the subject of his 1969 public confession that PNP has glorified as a “mandate of economic independence to the next generation”.

Bollocks! Until we face reality head-on, we'll be forever crying about violent crime, economic stagnation and societal inequity. We've been on a wrong path since 1962. Even a Ray Charles School of Civics graduate can see we've tried to mimic England's governance structures. That meek submission by former slaves to the dictates of former slave masters was always doomed.

Our history is replete with hostility to us by the English. Our docile acceptance of imposed English governance comes from mental slavery created by indoctrination, NOT education. We've tried this foreign, futile, farcical foolishness for 60 years. We've nothing to show for it except economic, social and psychological regression. WHEN will we accept we must stop doing the same thing over and over expecting a different result? WHEN will we accept we need fundamental change?

Don't get me wrong. The change of governance we so desperately need won't come with Constitutional Reform alone. But it won't come without Constitutional Reform. It begins there. However, it won't end unless we also institute comprehensive education reform to ensure future political, media and legal leaders are taught civics (among other essentials missing in action from curricula and presumed dead) by tertiary-trained, highly paid and empathetic teachers.

“As MP for North East St Ann I feel it's my duty to mobilise every initiative and resource necessary to help us power the engine of tourism that must drive our economy and progress. I'm excited to provide new ideas; plan strategies and execute them.

With this in mind, it is obvious that I've failed to be what constituents traditionally expect Members of Parliament to be.”

Twenty-five years ago, St Catherine South Central MP Heather Robinson quit, saying she was being asked to “hug up gunmen” which she rejected.

She hasn't quit (yet) but, last week, in Parliament, another St Ann South Eastern MP, Lisa Hanna, made me feel something baseball legend Yogi Berra would call “ déjà vu all over again”. She lamented MPs' perceived role; the abysmally slow, archaic and ineffective legislative agenda; and called for change:

“The role of MPs to the Jamaican people is as clear as mud, and it's time we define what ought to be our purpose. We are no longer respected by the people and this is obvious in the way we are spoken to or spoken about.”

Two decades ago one MP described MPs as “granny”. A decade ago, it was “gunman hugger”. Now it's “Santa”. Is not me sey so. This comes from the belly of the beast!

Who will use what gimmicky description in 2030? And again in 2040? And again in 2050? If we start the constitutional reform process today, maybe we'll see some hope while my great grandchildren live. If not, we'll live and die in current catastrophic chaos. We'll never live in hope and never rest in peace because our debt to future generations will remain unpaid.

Note: An earlier version of this story had said Robinson quit nine years ago. That was incorrect. It was actually 25 years ago.