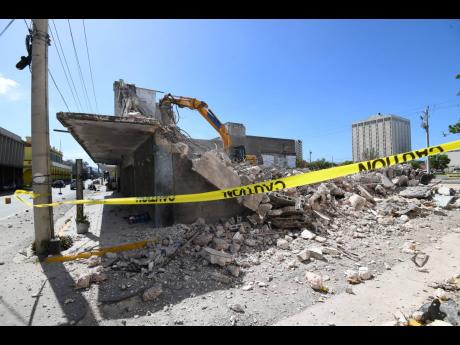 File
In this file photo an excavator is seen demolishing a building on Harbour Street to give way for a new development. 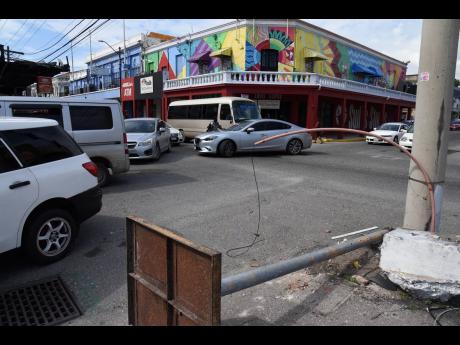 File
Intersection of Church and Harbour streets in downtown Kingston. 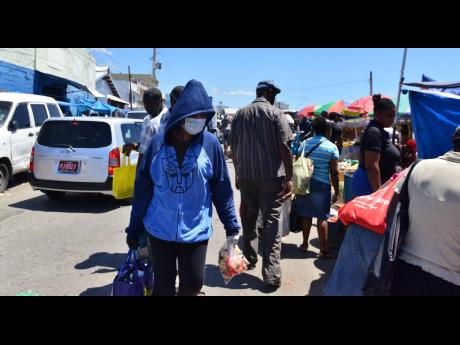 The 1692 ‘Plan of Kingston’ laid out by John Goffe was an economic enterprise and business venture established by the Monarchy of England, Jamaica’s governor, privateers, pirates, buccaneers, and planters. As merchants, many of these persons held various overlapping and interchanging roles, for example, the infamous Henry Morgan knighted by the King was privateer, pirate, buccaneer, Jamaica’s governor (1675, 1678, also 1680), and planter of Clarendon. Morgan lived in the King’s House in Spanish Town but primarily resided at the royal port around which the town of Port Royal developed.

According to Encyclopaedia Britannica, “…the ‘Royal African Company’ was formed in 1672 with a monopoly of the British slave trade, and from that time Jamaica became one of the world’s busiest slave markets, with a thriving smuggling trade to Spanish America…” such as Cuba, Panama, and Colombia.

On June 7, 1692, Port Royal, by that time infamous as the British African slave trade entrepôt designated “the wealthiest and wickedest city in the world”, was destroyed by earthquake and tsunami. This brought about the establishment of Kingston hastily, replacing the economic role Port Royal had played. At the time of the earthquake, ships were en route to Jamaica from Africa filled with African people in the enslavement traffic. Hence these merchants turned their attention across the Port Royal Harbour [Kingston Harbour] to the property of Samuel Barry and developed his hog-crawle [pig pen] into the new town they called Kingston [King’s town].

Its grid plan had principal streets on its north-south axis called King’s Street and its east-west, Queen’s Street in honour of William Henry of Orange and Queen Mary II, reigning in England at the time.

Kingston is situated on a sheltered Harbour reputed as the seventh best natural harbour in the world. French cartographer Christian Lilly in 1702 presents a drawing of the ‘Plan of Kingston’ indicating most of the plots south of the Parade already taken. Critically, the Lilly drawing shows early reclamation of the harbour because the speculative acquisition of Harbour Street was so successful that they developed Port Royall [sic] Street south of Harbour Street to create additional waterfront plots.

The significance of downtown Kingston is varied; however, I reiterate here that primarily is its outstanding universal value of the grid city plan set out from the Harbour northward to North Street and bounded westerly by West Street and easterly by East Street with the ‘Parade’ in the centre where the military held practice. The configuration of its grid plan with wide streets and narrow lanes in a vertical and horizontal rhythm remains a phenomenon that proved to be a successful economic model, two miles long and one mile wide.

Do we wish to destroy this heritage or build on it?

The ‘Plan of Kingston’ was the second grid plan established in the English Americas following Philadelphia (circa 1682) capital of Pennsylvania founded by William Penn whose father was part of the crew who captured Jamaica from Spain in 1655, and for that the King of England gifted to him the State of Pennsylvania.

In Philadelphia archives, I have handled letters from Kingston merchants to William Penn describing the 1692 earthquake.

For years I have been recommending to the Urban Development Corporation and various teams carrying out plans for the development of downtown Kingston to preserve as sacrosanct this historic 1692 footprint. Further, that Kingston development boundaries should include residential communities.

One key comprehensive strategy is from the Kingston Restoration Company Limited established in the 1990s, ‘Vision 2020: a master plan for the redevelopment of downtown Kingston, Jamaica, WI’

Another was in 2013 by my team for the Jamaica National Heritage Trust, ‘Declaring the Kingston Historic Urban Landscape and its Environs for Sustainable Heritage Tourism.’ It recommends designation of the 1692 Goffe ‘Plan of Kingston’ as the Preservation Scheme called ‘Downtown Kingston,’ with buffer zones extending eastward and westward with residential communities.

In 2015, Kingston was designated a UNESCO Creative City of Music, and under the leadership of Julian Jingles Reynolds and his ‘Sounds and Pressure Foundation’ team there is a Music District highlighting significant personalities such as Prince Buster in the birth of ska and reggae.

Gladstone Fluney Hutchinson, former director general and executive chairman of the Planning Institute of Jamaica, finalised in 2017 the ‘Downtown Kingston Redevelopment Project: An Innovative Public-Private-Community-Partnership’ to ensure residents and communities have an influential voice in the rethinking, design, and execution of redevelopment initiatives in Kingston.

Recently, visits to downtown Kingston have become tedious, where streets and lanes are blocked by huge trucks and excavator equipment, some driving opposite the one-way system. There are oversized pipes, and trenches where some are over six feet deep with certain roads impassable because of pipe-laying activities. In an urban environment over 300 years old, I ask myself, is the Jamaica National Heritage Trust undertaking archaeological heritage watch on these excavations? Interestingly, the works seem to be concentrated on Beeston Street, named after a former governor, and this street runs alongside both the JNHT and the Houses of Parliament.

I questioned persons living, working, and moving about the city, but all seem to be a mystery. Some say water pipe laying. Others say sewer pipes. Citizens express curiosity; when did the work begin? When will it end? Where are they making the connections? Many ended the conversation advising – “maybe you should ask the National Water Commission”.

Major work activities should be preceded by an Environmental and Heritage Impact Assessment. Citizens, especially in the downtown Kingston environs as stakeholders, should have been informed as a part of this assessment and invited to make inputs during the process. Yet responses from them are that they never received any notices. Why is there silence over these major works?

Mindful of The Gleaner editorial of November 15, these streets and lanes would fall under the Kingston and St Andrew Municipal Corporation. Hence, such a development should become a common cause for both political parties, “on which no one should go to sleep”.

Regardless of the historic beginnings and growth of downtown Kingston, its economic regeneration is a legacy to Jamaica, and should be handled with inclusion for its successful transferral to future generations.

- Patricia Green, PhD, is a registered architect, former head of the Caribbean School of Architecture in the Faculty of the Built Environment at University of Technology, Jamaica. Send feedback to patgreen2008@gmail.com.