Gordon Robinson | The birth of the crime monster 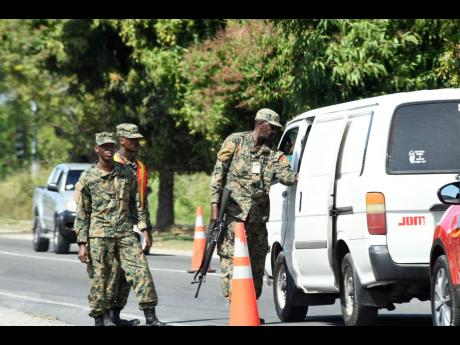 I dated PNP MP Heather Robinson’s resignation from representational politics (after refusing to “hug up gunmen”) in 2012 instead of 1996 when it actually happened. Apparently, PNP threw a hissy fit and someone, presumably from that venerable organisation ( Gleaner sent me an unsigned excerpt only), fired off an immediate message to The Gleaner:

“Gordon Robinson wrote today: ‘Nine years ago St Catherine South Central MP Heather Robinson quit’. WRONG it was in 1996 which is 25 years ago. Please have it corrected. With many thanks.”

Alllllrrrrighty then! The requested correction follows:

“Twenty-five years ago, one MP implied she was asked to be ‘gunman hugger’. Two decades ago one MP described MPs as ‘granny’. Now it’s ‘Santa’. Is not me sey so. This comes from the belly of the beast!

When I submitted the column, I bet the Old Ball and Chain anything she wanted against a no nagging week that it’d be JLP getting its knickers in a twist because of my expressed opinion it knows states of public emergency (SOEs) don’t work to reduce crime, especially as that opinion contradicted every government statement on the matter. So I owe her a remodelled home for the visit from Canada of/introduction to her grandson for his first birthday (Christmas Eve). Already painters and floor refinishers are hard at work and she has nagged relentlessly (I must suffer in silence) about crib sheets and mosquito nets.

Responses DID come from persons interested in the column’s substance. Two examples from different media:

“This article is spot on... I totally agree. I would also suggest that the government pass the Unexplained Wealth Legislation and use the proceeds from the sale of assets seized to help fund the Infant and Primary education of our children.”

2. By email from a regular reader:

“Super column once again, Gordon. If you have time, check a letter I wrote to the Gleaner in 2012 re reintroducing civics in the school curriculum.”

Anyway, thanks to PNP for inspiring me to take a closer look (now I owe Seth Myers royalties) at politics’ historical contribution to corruption of Jamaica’s security forces and deployment of soldiers to do police work. This perennially politicised Jamaica’s crime problems and permitted recent SOEs to be supported or critiqued using tribal megaphones. Regular readers (both of them) may be shocked to know this blindfolded view of violent crime was formed long before this Government’s first nonsensical crime-fighting SOE.

It began with Tivoli Gardens’ transition from model community to Mother of all Garrisons. In my 2019 Edward Seaga obituary ( Seaga was a man of principle), I wrote:

“This came to the fore in his bulldozing of Back-‘O-Wall to make way for the creation of Tivoli Gardens as a model community. He came under intense pressure, including from his own party. He stood his ground, maintaining that the squatter residents of that ghastly slum had been given more than sufficient notice to leave.

When asked, ‘But where will they be relocated?’

His reply was simple. ‘That’s their problem.’

He … never compromised on what he saw as the only way to develop the area in accordance with the sociological lessons he learned from living in Buxton Town. Perhaps, had his example been followed, the hundreds of squatter settlements dotting the Jamaican landscape now might’ve been avoided.”

The overwhelming majority of original residents were JLP supporters. This created community control by political gangs led by what’s now known as the Shower Posse and PNP’s retaliation with construction of rival garrisons.

But the seeds of today’s crime problem had already taken root when PNP became government in 1972. As 1960s roots produced tall strong trees and untended branches, PNP decided to fight fire with fire thus, predictably, burning everything to the ground. The unconstitutional Gun Court Act (provided “indefinite detention” for illegal possession of firearm) was struck down by Privy Council in 1975. So, in 1976, political corruption of security forces as a crime-fighting tool began in earnest.

PNP called Jamaica’s most disgraceful SOE ever, then used it to imprison political opponents. Alleged violence producers were extrajudicially killed or arbitrarily detained based on blank detention forms signed by the national security minister and handed out like confetti.

That lasted one year (a previously unimaginable SOE period but long enough to win a general election for PNP). But the Suppression of Crimes Act, another reprehensible reaction to a rash of uptown killings, allowed police to search and arrest without warrant and encouraged police excess for decades. A generation of police knew no other way to perform.

The shameful politicisation of crime-fighting by PNP in the 1970s produced at least two horrific examples of publicly corrupt acts by security forces already conditioned to believe this was the way to fight crime.

1. The Green Bay Massacre: On January 5, 1978, a covert army operation resulted in the execution of five JLP supporters who were among a group lured from JLP strongholds to the army’s Green Bay Firing Range on the promise of work. There they were ambushed and killed by a unit of JDF snipers. Some escaped the hail of bullets. A subsequent PNP national security minister assured Jamaica that “no angels died at Green Bay”.

Coincidentally, those who did were all Southside Labourites. We should never forget their names. Norman ‘Guttoo’ Thompson, former Santos football club and national footballer whose last desperate words when the bullets started flying were: ‘Don’t shoot. Is me, Guttoo, di footballer!’; Glenroy Richards, aspiring reggae singer; Trevor Clarke; Winston Hamilton, aka ‘Saddle Head’; and Martin Hamilton.

2. Claudie Massop: By 1967, 18-year-old Claudius ‘Claudie’ Massop, former street hustler, was already the leader of the Phoenix Gang (later the Shower Posse). Over the next decade he faced several criminal charges but wasn’t once convicted, including when charged with driving without a driver’s licence. His gang was constantly at war with PNP gangs led by infamous gang leaders with colourful monikers like ‘Feathermop’, ‘Burry Boy’ and ‘Red Tony’. Claudie was one of the JLP enforcers interred at Up Park Camp Detention Centre during the 1976 SOE but released when the SOE ended.

On February 4, 1979, Massop was killed by police who intercepted a taxi in which he was travelling home from a football match. Police alleged he shot at the large contingent of heavily armed policemen. Newspaper reports claimed Claudie was shot at least 40 times and several of the bullets entered his armpits. Occupants of the taxi – 21-year-old racehorse trainer Lloyd Frazer (‘Nolan’) and Canadian resident Trevor Tinson (‘Hindu’) – were also shot to death.

A personal memory: As news of Claudie’s death permeated the racetrack, it was known by those with ears on the ground that Claudie’s horse, aptly named Double Barrel, would win a selected race in order to “pay fa di funeral”. Sure enough, on Wednesday, February 14, Double Barrel, under David ‘Scorcher’ McKenzie, made all (unchallenged) to win the seven furlongs Jockeys Association Trophy at odds of 2-1. As they say in racing, nuff money mek! Reportedly 15,000 attended the funeral.

So why do they keep trying? Elementary, my dear Watson!

Firstly, because they can. Only we can stop them!

Secondly, because it’s electorally more convenient than admitting violent crime is endemic and not amenable to a one-, two-, three- or seven-year fix.

And politicians who pick dating nits instead of addressing clear and present dangers of totalitarian policing are sowing seeds of national destruction in fields of political myopia.