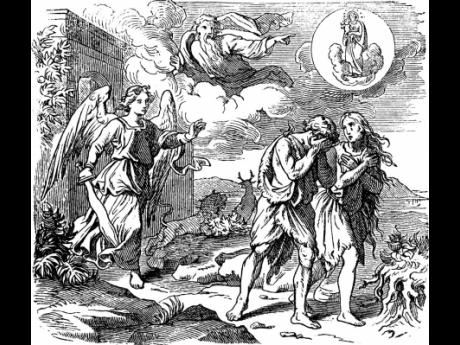 As was always the plan, God “banished” both Adam and Eve (remember this is all allegory) from “Eden” to discover they could produce enough humans to populate Earth and experience all.

In these columns, I keep teaching that most worldly barriers to peace, love, and understanding are man-made illusions.

One of the most insidious, soul-destroying enemies of humanity is individualism. Over centuries, we’ve cultivated the concept that each of us is separate from everybody else, and, individually, we must strive to be more successful, more educated, and more admired. We’ve been conned by society that these things will eventually give us power over others. We believe in power. Power makes us strong.

Ye Olde Testament, upon which many of the world’s religiously programmed depend, including when they believe it advocates for state murder (“an eye-for an eye”), tells the story of The Creation in allegory from an unscientific but equally sound basis of faith and divine inspiration.

According to Moses, the author of Genesis, God formed man (Adam) from the Earth’s dust and breathed life into him. All. Of. Him! God did his best to find Adam a “helpmeet” but none of the animals God created were (er, um) “suitable” for that particular purpose. So:

“God caused the man to fall into a deep sleep; and while he was sleeping, he took one of the man’s ribs and then closed up the place with flesh. Then the Lord God made a woman from the rib he had taken out of the man, and he brought her to the man.” Genesis 2:21-22

So, ascardin’ to Moses, this is how humanity began. Please note, Eve was “woman” not “female” (an adjective, folks, NOT a noun) and definitely not “fi male”. Adam and Eve were ONE. The allegory needs no interpretation. Adam was made from dust (to whence we’ll all return), and Eve was made from a part of Adam. So apart from external features, which are illusions created in the eye of the beholder, Adam and Eve were the same.

“This is now bone of my bones and flesh of my flesh; she shall be called ‘woman,’ for she was taken out of man.”

Biblical scholars, desperate to make us different and promote gender imbalance, insist that because there was more to Eve than just Adam’s rib, this makes men and women separate and different. Etymologists have tried to trace “woman” to old English “wife”. Christians should know woman means “taken out of man”. God shaped Eve to appear different, but taken out of man, they were meant to remain as one.

“That is why a man leaves his father and mother and is united to his wife, and they become one flesh.”

WHERE DID WE GO WRONG?

The question is: Where’d we go wrong? How’d we end up with men and women in constant conflict with words like “toxic masculinity”; “feminism”; and “gender war” embedded in the lexicon?

If we ignore religiously motivated mind-control strategies for a moment and think clearly about God’s plan, we’ll understand the creation of this relative existence we call life was a fulfilment of God’s absolute existence by adding relativity (or experience) theretofore missing from God’s knowledge-based existence. God knew all and saw all but experienced nought.

Now there’s only one way to ensure God experiences all as well as knows all, which is to send pieces of God to a relative existence and then grant them Free Will. It’s Free Will that allows humans to make choices independent of God’s Will. So you see, it is God’s Will that we aren’t forced to obey God’s Will. Humans’ choices lead to comprehensive experiences. It’s all part of God’s plan (Romans 8:28).

So from the earliest times, in the Garden of Eden, God began by “ordering” (warned, really) Adam not to eat of “the tree of knowledge of good and evil” or they would “die”. But we now know this was a trick because God’s Son later taught us “whosoever liveth and believeth in me shall never die”. John 11:26. But Adam fell for the ruse and told Eve. Every parent knows that the surest way for your children do something is to order them not to do it. So God’s warning not to eat (another allegory for opening your eyes and seeking experience) was promptly disobeyed by Eve.

NOW she was in trouble. She needed company in “sin” so convinced Adam to eat with her. Then Adam, like all men, looked for an excuse and invented “Satan”, in the form of a talking snake, to take the blame. It didn’t work. God knows there’s no “Satan”.

Lookie here, pastors. Either God is omnipotent or God’s evil enemy can tempt God’s children to do all sorts of horrible things God doesn’t want them to do. Both can’t be kareck. Satan is a male invention (an illusion created with Free Will) used to excuse embarrassing Free Will choices and frighten church-goers into tithing.

So God didn’t bother to contradict Adam. As was always the plan, God “banished” both (remember this is all allegory) from “Eden” to discover they could produce enough humans to populate Earth and experience all.

Thus humanity’s journey began. It wasn’t long before Free Will caused men and women to strive for the illusion of supremacy. The earliest gender illusion was the “Matriarchy”, where men were allegedly worker bees enslaved to the Queen Bee.

Male anthropologists Lewis Henry Morgan (USA), J.J. Bachofen (Switzerland), and Friedrich Engels (Germany) were instrumental in developing this 19th-century theory inspired by Darwinism. It proposed that human and cultural evolution were similar so that human social organisation “evolved” through a series of stages: animalistic sexual promiscuity followed by matriarchy, which was followed by patriarchy.

It’s bollocks! As I’ve written before, there’s neither matriarchy nor patriarchy. There’s only humanity using Free Will to make life all about power and devising all sorts of illusory concepts and labels to further that goal.

Men and women are doomed to repeat this ridiculously vain abuse of Free Will in an endless cycle of self-made misery until all people understand that life is NOT about power.

The reality is that power doesn’t make us strong. It makes us weak. As we strive to maintain the illusion of power, we waste too much time scheming to prevent others from capturing our power. The illusion of power is as intoxicating as any opioid, so we’ll do anything, sell anything, steal anything in order to feed the addiction.

When humanity decides to be unified across gender, race, religious and national borders and cease wasting energy on individual separateness, every human will find the inner strength that comes from unity and that births real, awesome, invincible power. It all begins with unity. There’s no inner strength without unity. There’s no power without inner strength. Absent THAT evolutionary sequence, everything is illusion or lie.

This is the time that we all should live as one, brothers.

This is the time that we all should live as one, sisters.

So come along brothers

and come along sisters.

So come along brothers and sisters.

When the late, great Desmond Dekker wrote U.N.I.T.Y. for the 1967 Festival Song Competition, he was issuing a plea for Jamaica to stop the crab-in-a-barrel behaviour creeping into society since Independence. Dekker was prescribing curative medication. Unfortunately, his message went unheeded.

Humanity was created to be as one. Unity is humanity’s salvation. So Maroons seeking “separate statehood”, regardless of their claims’ legal or moral merit, are only seeking self-destruction. Members of organisations, including political parties, actively promoting internal strife are ensuring organisational destruction and personal failure.

Insensitive, intolerant humans who seek to demean, segregate, or even destroy persons of different faiths, gender identities, or sexualities only expose and exacerbate their own limitations by restricting perspectives and experiences.

We must live as one,

‘Cause? Because two wrongs can never make a right!

So come along brothers

and come along sisters.