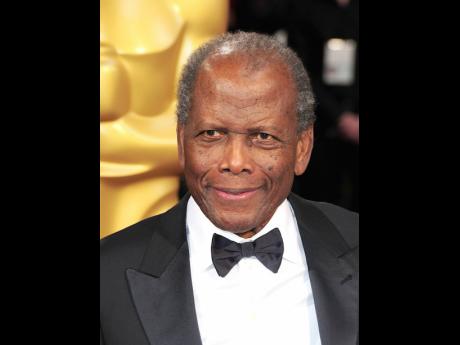 PIONEERING BAHAMIAN-AMERICAN actor Sidney Poitier, who died this month at the age of 94, was Hollywood’s first black global megastar, appearing in over 40 films. His 2000 autobiography, The Measure of A Man, recalled how his success had been achieved against seemingly insurmountable odds. Poitier’s parents - Evelyn and Reginald - were tomato farmers on the poverty-ridden Cat Island in The Bahamas. Sidney was born in Miami two months prematurely where his parents had travelled to, to sell tomatoes. His father did not expect the tiny child to survive and had bought a small coffin. His mother, however, consulted a local soothsayer who predicted that her seventh and youngest child would “walk with kings [and] be rich and famous”.

The charismatic Poitier became the first black actor in history to win a lead actor Oscar in 1964 at the age of 37, a record matched only 38 years later when Denzel Washington and Halle Berry triumphed in the same category at the 2002 Oscars at which Poitier also won a lifetime award. He was awarded the Presidential Medal of Freedom by Barack Obama in 2009, having been knighted by Queen Elizabeth II in 1974. Poitier radically changed perceptions of black people from the 1950s as the American civil rights struggle raged, forcing the gilded gates of Hollywood open to other black actors.

Even by the illusory standards of the fabled ‘American Dream’, Poitier’s success was a totally improbable fairy tale. He left school in The Bahamas after only 18 months of high school and worked as a waterboy for labourers. He then moved to Miami to live with an older brother at 15, washing dishes and digging ditches. For the first time in his life, he experienced racism in apartheid America. While walking in a rich suburban Florida, a group of white policemen put a gun to his forehead and debated for 10 agonising minutes whether to shoot him in his right or left eye. He moved to New York’s Afropolitan Harlem district, sleeping rough in bus terminals, public toilets, and on rooftops. He washed dishes, plucked chickens, and carried luggage. In frustration, he joined the US army in 1943 at the age of 16 and had an unhappy stint in a physiotherapy unit. In his first informal acting role, Poitier feigned insanity to secure a military discharge. He, however, imbibed the cultural diversity of the city’s lively theatre and jazz scene.

The barely literate Bahamian then applied to act at the American Negro Theatre in Harlem where his thick Caribbean accent twice led to failed auditions. Determined to succeed, he bought a cheap radio and spent hours imitating the American accents of the announcers. Poitier negotiated a job at the Negro Theatre as a janitor in exchange for acting lessons, eventually becoming an understudy to his lifelong friend, Caribbean-American Harry Belafonte. He got his first break acting in an all-black production of the Greek play Lysistrata in 1946 before exchanging the glitz of Broadway for the glamour of Hollywood.

Tall, dignified, and strikingly handsome, Poitier was comfortable in his own skin, having grown up as a self-confident youth in The Bahamas. He was reassuring to white audiences in the same way that Kenyan-Kansan American president, Obama, reassured whites that he was not an “angry black man”. Poitier deliberately took roles that depicted strong black characters with ‘refinement, education, and accomplishment’. He suppressed his sexuality to calm the fears of squirmish white audiences. The 23-year old got his Hollywood break in the 1950 movie No Way Out about a black doctor who is harassed by a racist white patient.

Poitier strongly backed America’s civil rights struggle, marching on Washington in 1963 and maintaining a close relationship with Martin Luther King Jr. He refused to distance himself from the principled and persecuted black artiste-activist Paul Robeson. A consciousness of the ancestral home developed after Poitier spent time in South Africa filming the 1951 Cry, the Beloved Country in which he played a black priest alongside another of his activist heroes, Caribbean-American Canada Lee. He became a lifelong opponent of the apartheid system, describing the country as “the worst place I have ever been.” He later portrayed South Africa’s liberation hero, Nelson Mandela, in a 1997 television movie, Mandela and De Klerk. Another 1957 film, Something of Value, had seen Poitier playing a Mau Mau sympathiser in Kenya fighting for independence from British rule.

The Bahamian-American became the first black artiste to be nominated for a leading role Oscar in 1958 for The Defiant Ones, a film about two escaped black and white convicts chained together. Three years later, he reprised his Broadway role for the film version of African-American author Lorraine Hansberry’s A Raisin in the Sun, about frustrated black aspirations in Chicago. As the Civil Rights Act was being passed in 1964, Poitier won the leading actor Oscar for the 1963 Lilies of the Field, a low-budget film about an itinerant handyman who helped German nuns to build a chapel in the Arizona desert. By now, he had become the world’s biggest box office attraction, with three blockbusters in 1967: he played a schoolmaster taming rebellious students in a school in London’s derelict East End in the adaptation of Guyanese author E.R.Braithwaite’s T o Sir with Love; he portrayed a Philadelphia detective working with a prejudiced Mississippi sheriff in In the Heat of the Night; and in Guess Who’s Coming to Dinner, he depicted a widowed doctor convincing “liberal” white parents to marry their daughter.

By the late 1960s, the martyred Martin Luther King Jr’s non-violence methods had been overtaken by the more radical Black Power movement. Poitier was increasingly accused of being an Uncle Tom, “the white man’s black man”, and a “showcase Negro”. The ultimate outsider who had spent his childhood in the Caribbean, Poitier was so stung by the growing criticisms that he retreated to The Bahamas for four years. He returned to America and turned more to directing, producing Buck and the Preacher (1972), acting alongside Harry Belafonte. The Poitier-directed Uptown Saturday Night (1974) with Bill Cosby, and Stir Crazy (1980) with Richard Pryor, were box-office hits, which increasingly provided opportunities to black actors.

Poitier married African-American model Juanita Hardy in 1950, and they had four daughters together. The couple divorced after 15 years amid revelations that Poitier had conducted a nine-year affair with African-American actress and co-star Diahann Carroll. He married white Canadian actress Joanna Shimkus in 1976, with whom he had two more daughters.

Poitier was a quiet revolutionary who used charm and grace rather than a pitchfork to convince white audiences to embrace a common humanity. Still, only in his thirties at the height of his fame, he often felt the weight of having to represent 18 million black Americans. Following Poitier’s death, Caribbean-British director Steve McQueen described him as “an icon to the Black diaspora”; Denzel Washington noted that Poitier had “opened doors for all of us that had been closed for years”; Viola Davis praised Poitier’s “dignity, normalcy, strength, excellence, and sheer electricity”; and Oprah Winfrey regretted that “the greatest of the Great Trees has fallen”.

Professor Adekeye Adebajo is a senior research fellow at the University of Pretoria’s Centre for the Advancement of Scholarship in South Africa. Send feedback to columns@gleanerjm.com.