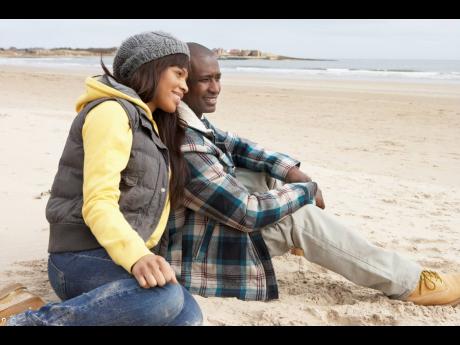 As soon as you start actively wanting the 80 per cent you actually have, you’ll begin to live a fulfilling life of love and happiness.

It is said that with age, comes wisdom.

It’s true that this coincidence does often occur, but I assure you, the two are not related except regarding opportunity afforded by time. The thing is that as some of us age, we are fortunate to engage in a variety of experiences and these experiences, if taken as education, are what bring wisdom. It’s wisdom through experience that God sent us here to acquire on God’s behalf.

So, age, without experience, means nothing. It does give rise to certain misconceptions from the younger set. Grenadian-born Caribbean musical icon Slinger Francisco (a.k.a. ‘The Mighty Sparrow’) wrote and sang about this:

I could still perform or function.

I could handle any action

The thing about aging “gracefully”, which can only be done in combination with wisdom acquired from experience, is that it teaches you to stop chasing everything you think you want and, instead, learn to want what you have. As a young man I learned that chasing women or money frightened both away. They ran as if they were being, well, chased!

As soon as I realised that the world is based on opposites, I ignored women and embraced poverty. I had to beat off the former with a stick (which I now use only for assistance to walk), while the latter fled from my warm embrace. Unfortunately, before I could benefit from either, The Old Ball and Chain anchored me; used my stick to stoutly defend her property; and (er, um) “found use” for the money. But the “principle of opposites” remains true.

Now that I’m a Grumpy Old Man, I realise that I want only what I have and nothing more. It’s called wisdom.

They telling lie on me.

I tell you age is just a number

controlled by your state of mind.

Maturity is another wisdom-related trait that comes only through experience usually at the world-famous College of Hard Knocks (a.k.a. real life). If you never experience adversity, you’ll be doomed to live in a permanent fantasyland where you get everything you want without ever realising this is disadvantageous.

You develop a dread disease called Entitlement that metastasises into an illusion that you wield “power” over others (lesser mortals) who you can manipulate to your benefit with bullyism, threats, and “strength of cash”. But like slave masters discovered, THAT illusion of “power” dissipates as those “lesser mortals” unify around positive concepts like self-esteem, self-worth, equality, and freedom; join forces; and defeat wealthy bullies by striking at their weakness, which is fear of transfer of “power” to others. THAT all-encompassing fear leads to unhappiness and an inability to love sincerely, which eventually becomes their undoing.

When your “power” comes from a lust for dark materials like money and influence, you can never trust any positive emotion shown to you by another. Your fear of power loss makes every relationship transactional and, therefore, unhappy. True love, even pure and chaste from afar (life’s impossible dream and glorious quest, according to songwriters Leigh Mitch and Darion Joseph) can never be yours.

Other unhappy mortals will fight over who should “inherit” them until their spirits are destroyed by the obsession of acquiring your dark materials. They will never progress beyond immaturity to wisdom no matter how long they live or how old they become. They’ll only experience the acquisition or chase after earthly dark materials.

Believe me age is just a number.

The golden years can be divine.

Is after sixty-eight is over

you could really enjoy sixty-nine.

So I’m looking forward to 2023 (that’s “twenty-twenty-three”, folks) when I shall still be embracing poverty, but Sparrow promised me special enjoyment.

On July 16 2019, I published my version of the Pareto Rule in a column (“The 80/20 Rule”). It’s one of the most significant acquisitions of wisdom that comes from experience. Those few who know me well know that, tongue only half tucked in cheek, I blame computers and the Internet for all the world’s problems.

So I wrote then on why Old BC and I have been able to maintain a happy relationship for over four decades. COVID-willing, the twoth of March 2022 will be our 40th wedding anniversary.

“In the days when I used to pursue a Young Ball and Chain until she caught me, everything was left to the imagination. The most sexually explicit material was found in books. As a teenager, a friend loaned me his dog-eared copy of Fanny Hill (by English novelist John Cleland, first published in 1748), which contained zero profanity, but cleverly used words like ‘nethermouth’ to describe unmentionable lady parts and get teenage boys like me hot and bothered. The book was banned by 18th-century sex police.

So, unsophisticated boys sheltered from educational media like then non-existent American Triple Ecstasy were forced to learn and rely on obsolete techniques that included opening doors for girls; speaking to them face to face (very few telephones available); carrying things (like books) for them; going for walks or (thrill of thrills) to the movies to spend two hours surreptitiously trying to put your arm around your ‘date’. If a girl actually liked you back, she was the one!”

Today, most youth aren’t permitted these experiences. The Internet has birthed dating “Apps” (whatever those are), where couples meet up based on fake “profiles”; speed-dating sessions (a musical chairs game where couples change tables and partners every few minutes when a timer goes off); and, of course, the epicentre of meeting-and-greeting potential spouses: singles bars!

Nobody (definitely NOT parents) introduces (or “sets up”) people known to the unofficial matchmaker anymore. It’s all computer generated, theatrically produced, and based on the 21st-century mantra instant gratification.

I continued my old fashioned plea for true love and happiness:

“But the real truth is that every good relationship is governed by the 80/20 rule. There’s no happily-ever-after, no matter what Gerald Mills or Charles Boon says. One of my favourite sportscasters, the legendary Harry Caray, would read congratulatory anniversary messages during every Cubs game. He’d say (sarcastically): “John and Mary. Married 30 years” (pause for his perennial punch line) “and never had an argument!” followed by gales of laughter at his own joke.

Not possible! Perfect marriage/spouse concepts are the wickedest illusions forced upon us. Every marriage has stresses, tensions, and disappointments. What the spiritually advanced rely on to succeed is the 80/20 rule.

What’s the 80/20 rule? Your Mr/Ms Right can only deliver 80 per cent of your wants or needs. It’s a scientific fact. During the course of a relationship, you’ll meet a special someone who can provide the missing 20 per cent. DON’T BE STUPID. Don’t allow temptation to trick you into giving up 80 per cent in exchange for 20 per cent.”

THERE’S NO 100 PER CENT ANYWHERE

Please stop hankering after that 20 per cent advertised on social media by sexy videos that seem to have no point other than to promote the subject’s sex appeal. And, for pity’s sake, stop seeing features you think are lacking in your spouse in other persons you don’t really know. It’s. Not. Real!

This is an imperfect world. There’s no 100 per cent anywhere. If you end up with that “other” person, you’ll soon find he/she only has 20 per cent to offer and may only be sharing five per cent with you, while he/she seeks other options (giving five per cent to each candidate) just in case YOU turn out not as lucrative an opportunity as YOU seemed at first blush.

As soon as you start actively wanting the 80 per cent you actually have, you’ll begin to live a fulfilling life of love and happiness.

Acquired wisdom will allow you to find and recognise true love and real happiness. So seek wisdom instead of dark materials. For example, as you grow older, wisdom teaches that you won’t be entering the Olympics any time soon. So don’t try. Take light exercise. Walk, don’t run. Swim. Use light weights for resistance training. Stop trying to impress others. Concentrate on self-esteem, self worth, self-confidence and self-improvement. All of these are found within. Experience the pluses and minuses of real life.

If you choose dark materials, you’ll find that they come with stress, unhappiness, and obstacles to wisdom on the side. Don’t try to capture them. They’ll capture you.