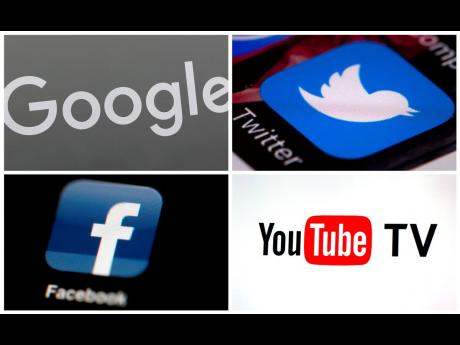 AP/ File
This combination of photos, clockwise, from upper left: a Google sign, the Twitter app, YouTube TV logo and the Facebook app. Selena Gomez is laying much of the blame for the violent attack on the US Capitol at the feet of Big Tech. The singer told the leaders of Facebook, Twitter, Google and YouTube that they’ve allowed “people with hate in their hearts” to thrive and therefore “failed all the American people”. It’s just the latest in the 28-year-old Gomez’s efforts to draw attention to the dangers of internet companies. 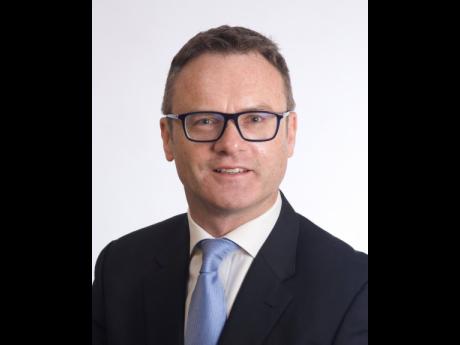 The enormous profits and global dominance of the Big Tech hyperscalers are rarely out of the news and, almost daily, there are new reports on how they have undermined society and democracy in the pursuit of profit.

Today, there is a better understanding of the real cost of the ‘new business model’ Big Tech told us it invented. As it turned out this model contained some very old concepts, such as abusing huge market power and exploiting the absence of regulation to use the resources of others to make profits.

Countries are now responding in several ways to meet this challenge. They are introducing new rules to regulate Big Tech, in particular with privacy laws and regulations that ban certain practices used by the Big Tech hyperscalers. The Caribbean will need to introduce similar regulations and the Caribbean Telecommunications Union is leading a project to develop such rules for the Caribbean region. In addition, countries are also using existing competition laws to challenge Big Tech’s abusive practices. Jamaica and other Caribbean countries already have competition laws that can be used now to protect the Caribbean.

COMPETITION LAW TO THE RESCUE

Competition laws (also known as antitrust laws) were first used over a hundred years ago in the United States to tackle the large oil and railway monopolies that dominated the economy at the time. These laws set out the limits of what private companies may do and contain two key rules: they prohibit agreements not to compete (for example, to fix prices), and companies that are so large that they dominate a market may not abuse their market power to harm competitors or consumers.

Since then, competition laws were introduced in many different countries, including in the Caribbean. In recent years, competition authorities in different parts of the world have commenced investigations into the abuse of market power by Big Tech in order to protect local consumers and companies from the unfair behaviour of these companies that now dominate the Internet. As examples:

• In the European Union, the United States and the UK competition authorities are investigating the monopolisation of digital advertising, e-commerce, online searches and mobile app stores by the Big Tech hyperscalers.

• In Australia, Facebook and Google were forced to conclude commercial agreements to pay local newspapers when an investigation by the competition authority found that the Big Tech players were abusing their market power by refusing to pay for the newspapers’ news content they were using.

• In South Korea, a court ruled that Netflix was abusing its market power by refusing to pay a local broadband network operator for the use of its network to deliver Netflix services to consumers.

• In Germany, the competition authority is currently investigating Facebook for abusing its monopoly on social media to improperly harvest user data.

Competition law can also enable individuals to take private legal actions for damages. For example, in the UK, millions of consumers are using competition law to take a legal action against Facebook, claiming over US$3 billion in compensation for forcing consumers to surrender their valuable personal data without payment.

In order to punish and deter illegal behaviour, competition authorities have imposed very significant fines on the Big Tech hyperscalers. These have amounted to several billion US dollars in some cases. Given the size of their wealth, fines are not always a deterrent for Big Tech however, and, in response to this, Ireland is now proposing to make their directors personally criminally liable for abuses on their platforms.

THE CARIBBEAN CAN TAKE ACTION

All of the above examples are relevant in the Caribbean. Caribbean consumers and local businesses are also victims of Big Tech’s monopolisation of internet searches, advertising and e-commerce and this is damaging the economies of Caribbean countries and job prospects for people in the Caribbean.

Local Caribbean media and independent journalism are under threat from Facebook and Google in the same way that the media in Australia was threatened. If Big Tech refuse to pay for the content they use local journalism will not be able to survive and this has profound implications for democracy in the Caribbean.

Less visible to the public eye, Big Tech’s abuses are threatening the Internet itself. In Europe, the CEOs of the four largest mobile operators called on governments to oblige the Big Tech hyperscalers to pay towards the cost of the networks they use. This is needed to ensure that investment in 5G networks can proceed and emerging regions such as the Caribbean face an even greater challenge in securing investment for 5G.

Certainly Caribbean citizens may be entitled to billions of dollars in compensation, as their valuable personal data will also have been harvested without payment.

The investigations that have already taken place in other countries provide the ‘playbook’ that can guide how similar investigations can be undertaken in the Caribbean. For example, the competition authority in Australia (the ACCC) found that Facebook and Google are dominant on the market for digital advertising and were abusing this dominance by failing to pay newspapers in Australia for using their news content. It then required Facebook and Google to engage with the newspapers and pay for their content. As this market operates in a similar way worldwide, a competition authority in the Caribbean could follow the same process to protect newspapers here.

In the Caribbean, Jamaica is well placed to take the lead as it already has modern competition legislation in place with the Fair Competition Act and the Fair Trading Commission is a very well-established competition authority.

Big Tech has remained immune from scrutiny in the region to date. If Caribbean authorities such as the Fair Trading Commission need extra resources to investigate Big Tech’s practices these should be allocated. Cooperation agreements with competition authorities in other jurisdictions such as Australia, the UK and the European Union could be formalised to enable the sharing of information, expertise and best practice.

The CARICOM Competition Commission, which supports competition authorities in the region, could also be given a mandate and resources to support the investigation of Big Tech across the Caribbean. It could serve as a centre of excellence where expertise on investigating Big Tech could be focused and perhaps it could be given a role to coordinate investigations across the region. The commission could also advise countries that do not yet have competition law provisions on how they could introduce these through new laws or by amending existing telecommunications legislation.

Investigations and enforcement action by the Fair Trading Commission, and competition authorities in other Caribbean nations, could make a real difference to how the Big Tech hyperscalers behave in the region, in particular if they are accompanied by the prospect of significant fines and personal consequences for key staff members of these companies.

The Internet does not belong to the Big Tech hyperscalers – it belongs to the people. Likewise, the Caribbean digital economy does not exist so that Big Tech can profit at all costs – it exists for the benefit of the Caribbean. New regulations in other jurisdictions provide examples of how Caribbean regulators can be empowered to tackle Big Tech’s abusive practices. The danger of failing to act is that abusive practices that are illegal in other parts of the world will continue unchecked in the Caribbean.

The development of new regulations will take time but, in the meantime, competition laws such as the Fair Trading Act in Jamaica provide a framework under which action can be taken to protect the interests of citizens and local businesses. There are a large number of competition law investigations and cases against Big Tech under way in other jurisdictions around the world. These demonstrate that it is possible to act now and provide guidance that Caribbean authorities can follow. By using local competition laws, Caribbean authorities can start to take action to ensure that the Caribbean is also protected against abusive behaviour by the Big Tech hyperscalers.