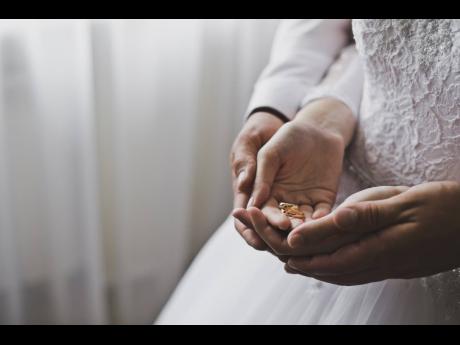 I wholeheartedly believe in marriage. I mean real marriage, not one of those transactional relationships too often evident in this new world.

Legendary black standup comedian Nipsey Russell often quipped: “Marriage is an institution and love is blind. After seeing what some of you have for wives, you MUST be blind!”

I love you Nipsey, but you’re wrong. I wholeheartedly believe in marriage. I mean, real marriage, not one of those transactional relationships too transparently routine in this new world.

My favourite television show is Outlander (Caitriona Balfe and Sam Heughan) – my idea of the greatest love story ever until I read a Twitter post by one James Williams, a black American, using the handle “Get Thee Vaccinated or get thee a toe tag”. Love it. AND his story needs no embellishment but plenty kleenex:

“We met when I was 19. She was 20 at Fisk University. She was on her SECOND engagement to a 30-year-old bank VP who drove a Datsun 240Z. I was six months removed from food stamps and my bus pass just expired. When I first saw her, I literally fell off a fence … .”

My idea of the most important ingredient in a successful marriage is for the spouses to know each other inside and out. The best way to accomplish this is to meet and interact when very young so still unpretentious.

I was so in love with her as her boyfriend, I got a SECOND job at night as a copy editor at a law firm to proof her briefs. I sent the money from my second job direct deposit to her to a bank in Boston. She was one of ten Black women who graduated. Nope, not married yet.”

A successful marriage is an equal partnership. Failed marriages have a captain and first mate. My mother-in-law, a Finn who never wrapped her mind around or fully embraced the English language (“th”s were especially difficult), would say it is to endure “through sick and sin”!

“We married, had four children together (the first died as an infant), one child has autism, and we went through life together. In 2006, she started falling, for strange reasons. Multiple Sclerosis was the diagnosis.”

This is where the true test begins.

“Toward the end, her tremors were so bad, I finally learned how to do her hair, nails, make-up. I carried her around the house because she didn’t want a stair lift. I did get a foley lift installed in the bedroom so I could bathe and moisturize her skin every day and made cleaning her up after using the bathroom – going to the toilet, washing her face, bathing her daily – easier. She had 24-hour nursing care.”

Nursing care is essential at times like this. But it cannot substitute for the love and care of your life partner who MUST understand, as reflexively as breathing, that you are his life’s purpose. Only YOU instinctively KNOW with what your partner is comfortable.

“Like most people with chronic illnesses, she cycled in and out of Johns Hopkins – in for a week or two, rehab center for six weeks, come home, things seemed better, then got worse. Wash, rinse, repeat for five years.

The last week of her life, she agreed to go to Johns Hopkins because her vitals weren’t good. We weren’t there fifteen minutes when she went into cardiac arrest. The doctor punched the big red button on the wall, put her on a gurney and we were all running down the hall.”

It doesn’t matter what you do for a living. Your life is to be THERE for her.

“The next two hours all I saw were her feet. A team of about six doctors surrounded her, firing off questions to me about her past history, what she had to eat, etc. Finally stabilizing her, we were put in an ICU unit. It was 2 a.m. until she woke up.

‘James, what in the hell happened?’ ‘Girl your heart stopped.’ ‘Did I have a heart attack?’ ‘No, your heart stopped beating.’ She reached out for my face. ‘I’m so glad your face is the first one I see. If this ever happens again, just let me go. I hurt all over.’”

These discussions are as important as the monthly budget. You MUST know from Day One her wishes on sickness and death and she MUST know yours. NOTHING and NOBODY can be allowed to thwart those wishes. Only YOU know what they are.

“The next day, she was having problems breathing. The nurse brought in a big old machine. Welp, she punched the big red button again. ‘Prepare the OR, she has four blood clots on her lungs.’ I’m running down the hall again.

At the OR, she reached back to me. ‘I need to talk to my husband.’ ‘You have ten seconds.’ ‘James, one of two things is gonna happen. Either I’m going to come out alive and everything is going to be fine. Or, I won’t come out alive. And everything will be fine.’”

This is the spiritual understanding that only comes from a life of deep connection. This is a true sense of purpose through empathy.

“I waited in a room by myself, texting her sorority sisters and Harvard Ladies who wanted to know everything. After five hours the doctor told me she was stabilized and hopefully things would get better. She had four blood clots.

My aunt allowed me to go home, get a shower and come back. Her main doctor said … things should be OK.

I wasn’t home five minutes when my phone said ‘Johns Hopkins’ at 3a.m. ‘Mr. Williams, she crashed again. We intubated her. You need to get here. NOW.’ I headed back. The doctor broke it down to me.

‘Mr. Williams, your wife’s internal organs are shutting down. There’s no brain wave activity. She can stay like this for who knows how long, or you can decide to take her off the breathing device.’ Fortunately, we’d talked about this since we first got married.”

Again, marriage is all about partnership. Its products are unique understanding of each others’ needs and deep drive to satisfy them.

“They removed the tube separately, but I spent time with her before that happened. After the tube was removed, we all went down the room to let life happen. I was in the bed, under the covers, with her, holding her as tight as I could. I didn’t believe this ... was really ...

Her breathing was shallower and shallower. My friends were singing gospel songs. I whispered in her ear the song I made our song, the Temptations You’re My Everything . ‘You surely must know magic girl ‘cause you changed my life.’

‘I was blessed the day I found you, gonna build my whole world around you.’ You’re everything, good girl ,and you’re all that matters to me. When my way was dark, and trouble was near, your love provided the light so I could see –

‘Just knowing your love was near when times were bad, kept the world from closing in on me, girl… .’ She stopped moving and breathing. The doctor, who was in the room, came over and put his stethoscope to her chest. I’m really holding on now.

‘Mr. Williams? It’s over. Your wife has joined our ancestors.’”

Death is a part of the life cycle. It comes to all of us, rich or poor, fat or thin, ugly or beautiful. We are ALL the same. What is important in this world isn’t that we are going to die. It’s how we are going to live. If we do it right, we’ll never walk alone but more importantly, we’ll never die alone.

“As I walked from Johns Hopkins for the next phase of my life, my pastor pulled me aside. ‘James, you never cheated, lied to, beat, or disgraced your wife, children or marriage. This is how a good marriage is supposed to end.’

‘You fought the good fight. You ran the race. You kept the faith.’ He pulled me around and held my face: ‘Well done, my good and faithful servant.’

Thank you for a wonderful 9,928 days, eight hours and 50 minutes of marriage. Thank you for letting me know it’s ok to love again. Rest in peace and power, Queen.”

James, when I grow up I want to be just like you. You see, James, for 14,666 days (so far), I’ve been married to a wife like yours. But she isn’t so lucky. So The Old Ball and Chain is asking you to give lessons.