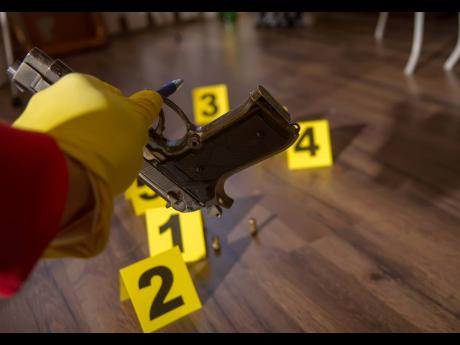 Increasingly we are seeing video clips of young men unafraid to show their faces and the modern weapons of death they possess with their faces exposed to all.

Looking back at that Saturday evening way back in 1996, if my memory refuses to play games with me, I was OK with myself and in a good mood. My two friends, a married couple and I were ‘trampoozing,’ that is, driving out to any place and caring...

Looking back at that Saturday evening way back in 1996, if my memory refuses to play games with me, I was OK with myself and in a good mood. My two friends, a married couple and I were ‘trampoozing,’ that is, driving out to any place and caring little about where it was, when we reached, or what time we left.

We were in St Thomas. Close to the beach and a most spectacular view. We pulled over to a bar/restaurant and began to drink cold beer and shots of rum and indulge in pointless conversations about politics, religion, and sex.

In about half an hour, I found myself speaking with a man who insisted that he wanted to cover our liquor bill and any food we required. He recognised my face from the picture from my newspaper column. At the time, I was 46 and the man seemed to be about in his late 50s. He was what one would describe as a Jamaican ‘red man’ with ‘pretty hair,’ cigarette-stained teeth, and an expert storyteller.

The man was a well-known race horse owner. But he was not a man to cling closely to any one field. He operated in a time in the 1970s when business moguls of the 2020s were criminalising themselves by exporting weed and planting strong roots in establishing their real estate clout 50 years later.

He was on a rough-pebble beach near Rocky Point sometime in the 1970s. The arrangement had its risks, but if all the players knew their individual roles, it would be a success and every one would make money. The bales of pressed ganja had been set up with a rope and two bamboo poles. The small Cessna would skim the beach area, release a metallic wire with a hook and capture the weed. At the same time, it would drop a waterproof bag. With the real US dollars.

The players were in The Bahamas, Colombia, and Miami. But for the real big stuff. For this, it was kids’ play with only five or ten million Jamaican dollars to be made. It was a regular run, though. As the plane did its pick-up and the cash was released, the men rushed to snatch the waterproof bale from the water. Then the sound from a section of the mangroves. “Police! Don’t move a r***!”

The brown man laughed as he made his way to his car from a narrow, hidden section of the beach. “Onnu nuh hear mi. Mi sey POLICE!” the shout went again. The brown man drove his car to the beach, collected the package of US dollars, and stashed it in the rear trunk section of the car. “Boss, whey wi fi do?” said one of brown man’s crew.

“Come in di car!” As the policemen approached, brown man figured that there were about seven of them. The car engine was on as he exited the vehicle. He opened an attaché case and scooped up some cash. He took it with him as he returned to the car. “Drive!” he said as he released the cash in the wind.

He broke into crazy laughter as he spoke to me. “Mi look in the rear view mirror and si the policeman dem a run dung US dollars. Mi just drive an go bout mi business. When me reach home, mi mek contact with ‘spec’ and arrange fi meet wid him.”

Increasingly, we are seeing video clips of young men unafraid to show their faces and the modern weapons of death they possess with their faces exposed to all. Most of those young men who are seemingly defying the forces of law and order have long lost any respect they may have had for politicians, big-business moguls, and the man driving through their near neighbourhoods with Porsches.

They used to work for that lot and used to refer to them as ‘boss’ and ‘sir .’ Now with a deadly automatic rifle with extended magazine, they need to fear no one.

“Do many of these young killers really expect to die young to the extent that they no longer care?” I asked my friend, a clinical psychologist with 30 years’ experience. I’ve heard that argument many times.

“Mark, it’s 2022, and I would like to believe that I know more, understand more, and am better able to process it all and help people through their nightmares. I am so wrong. Many of these young men can be rescued, but too many of us cannot bother to involve ourselves in mental experiences where we already know the outcome. A lot of them have logged off the official system and are into their love of the gun and the respect it gives them.”

The same friend I was ‘trampoozing’ with on that day in the 1990s used to be a cop. He would always tell me this story about his squaddies and a drug seizure they came upon. Again, it was in the area close to Rocky Point. Heroin was the drug intercepted in a minor drug bust.

“The men spoke Spanish. One could also speak English. They were caught and close to being under arrest on that day in the late 1970s. There were four of them and six Jamaican policemen. The police were counting the US dollars seized. Based on the count, it was significantly over US$500,000.”

One of the junior policemen, a constable, knew basic Spanish from high school. They were engaged in conversation with one of the Spaniards. The inspector shouted at him. “Do not engage him in any conversation!” he said. “Prepare to take them away,” he insisted.

The policeman who spoke Spanish moved over to the inspector and spoke in his ear, “Dem sey wi can get US$150,000.” The inspector held his chin and stared straight ahead. Then he said: “I did not hear that. That is between you and him!” he said in a gruff voice.

He was allowed to collect the $150,000. As the policemen left, the constable said, “Spec, wi have your piece. “A know. Pass by mi house,” said the inspector.