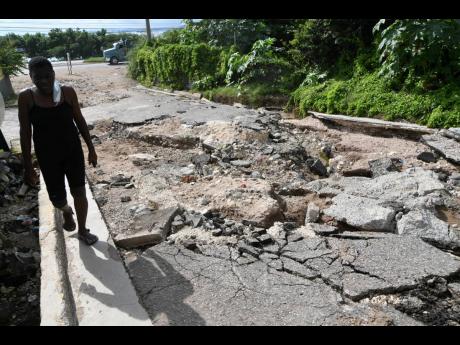 File
Two communities are Melbrook Heights, an ‘informal’ settlement, and the distinct development by West Indies Home Contractors. As coastal settlement, Harbour View is fraught with flooding and landslides.

Informal tenure often involves squatting, where households occupy a parcel of land that belongs to someone else, state Jan K. Brueckner and Harris Selod, “… while paying no financial compensation …” elaborated in ‘A Theory of Urban Squatting and Land-Tenure Formalization in Developing Countries’.

This is what Jamaicans often call ‘land-grabbing’ and should be distinguished from historic land ownership of former enslaved Africans after the 1834 Emancipation from slavery. I argue that what continues to be discounted in the land tenure and squatting discourse is the historic colonial marginalisation of the entitlement of persons of African descent across generations. This disregard must end.

The ‘Black Lives Matter’ movement has opened the floodgates on decolonisation issues. The settlement tenure concerns labelled ‘informal’ must be re-evaluated carefully by developing countries. Whose definition is being applied for ‘developing nations’? What is the agenda behind marginalising certain communities as ‘informal’? How do developing countries define ‘squatting’ for themselves?

Historic research of post-Emancipation land ownership by formerly enslaved Africans and their descendants should form a part of any land-tenure examination and discourse.

In 1796, between 550 and 600 Maroon men, women, and children were exiled from Trelawny in Jamaica and shipped to Halifax, Nova Scotia, Canada. By 1848, the first black settlers bought coastal land to establish the town “Africville” as a community for African-Nova Scotians. Although the citizens paid taxes and made constant pleas over the years for roads and other public infrastructure and services, the government provided none. In 1948, Halifax approved funds to connect Africville to water and sewer services, but these were never installed. Instead, between 1850 and the 1950s, the government erected a railway line that divided the town and a city prison, an infectious disease hospital, a slaughterhouse and a city dump. After years of neglect, the government formally labelled the town a ‘slum.’ In 1964, the government evicted the residents of Africville in the name of ‘urban renewal,’ and demolished the town.

Ingrid Waldron labels this “… environmental racism … one of the forms of structural violence impacting the souls, spirit, minds and bodies of African Nova Scotian people ... rooted in a legacy of colonial violence …”. Today, descendants of Africville are before the courts for reparation.

Many Jamaican communities bear commonalities with Africville under the guise of development. After Emancipation, formerly enslaved persons purchased lands across Jamaica. These lands invariably were unsuitable for the expansive cultivation of sugar and other plantation crops. Hillside lands mostly containing waterfalls and also river banks were allocated for these purchases, primarily because they provided access to available water sources essential for domestic use. Some settlements were close to coastal areas. Livelihoods for these communities were agricultural, including fishing, and marine activities. Even before Emancipation, marine transportation was the dominant network connecting towns and villages.

Today, in the absence of continuous regularisation of these settlements and land tenure by colonial and subsequent governments since Independence, these Jamaican communities are commonly marginalised and labelled ‘informal’ under the guise of ‘squatting.’

Settlements and communities across Jamaica have been disrupted, and often without compensation, primarily through development projects such as bauxite mining and road construction. Currently, a new phenomenon has emerged: the increased pace of multifamily high-rise residential construction.

Harbour View provides an interpretive example, with a number of communities spanning both sides of the Hope River estuary. Two communities are Melbrook Heights, an ‘informal’ settlement, and the distinct development by West Indies Home Contractors (WIHCON) mass-housing 1960 project comprising 1,800 units. WIHCON built two- and three-bedroom houses. As a community,Harbour View is fraught with flooding and landslides. Citizens are terrified because the hurricane season begins on June 1.

Identifying that the issues are worsened by the incapacity of the central and local governments with financial and technical resources limitations, Ishemo states, “… the solution to this problem requires an integrated and long-term action programme regardless of the political party in power …”.

The World Bank data from Natural Disaster Hotspots: A Global Risk Analysis indicate that Jamaica ranks high among the countries most susceptible to disasters and that 87.7 per cent of the population is in areas at risk from three or more hazards. The Office of Disaster Preparedness and Emergency Management (ODPEM) initiated a Landslide Risk Reduction Project. Melbrook Heights as one of four communities, previously ‘informal’ then regularised, benefited from a 2012 project on disaster mitigation implemented through World Bank funding.

Thereafter, the WIHCON housing scheme began experiencing, reports The Gleaner, May 7, 2018, ‘Flood of fears – More than 30 houses under threat as water destroys perimeter walls’; “… we have been lobbying the Government … we have also given them solutions … we have been crying for help and, now, this is what has happened…”. Daily Observer of January 4, 2021 headlines, ‘Paulwell wants urgent attention for people of Harbour Heights;’ “… frantic appeal by homeowners in the area this past week for the authorities to correct blunders which, they said, have endangered their community over the years and have got worse since torrential rains linked to two tropical storms between October and November…”. This article added that the problem stemmed from the 2012 World Bank Landslide Mitigation Project.

‘Stop sand mining in the Hope River’ headlines The Gleaner, February 10, 2021, where Melbrook Heights citizens are frustrated because the river course has changed owing to the deleterious effects of sand-mining. It states that mining continues, apparently unregulated. “… The Ministry of Transport and Mining’s Mines and Geology Division reiterated that would-be miners must submit applications requesting inspection of a proposed quarry site to a number of government agencies, including the National Works Agency, National Environment and Planning Agency, the Agricultural Land Management Division, the Environment Health Unit, the Ministry of Health, the municipal corporation, among others …”.

In ‘Sand mining: the global environmental crisis you’ve probably never heard of,’ writes Vince Beiser in The Guardian of February 27, 2017, “… the demand is voracious. The global urbanisation boom is devouring colossal amounts of sand – the key ingredient of concrete and asphalt … everywhere, the process impacts its surroundings in ways that range from cosmetic to catastrophic …”. Flooding and landslides in Harbour View communities are now catastrophic!

TVJ prime time news reported on February 13, 2020, that the and-mining site at Fort Charles in St Elizabeth had gone 60 feet below sea level.

In Jamaica, the impression is that gully-flooding is an ‘informal’ community phenomenon. However, the 30 Harbour View houses endangered by landslide of boundary walls and out buildings are part of the titled 1960 housing scheme and are purchased properties. Their fight over sewerage plant removal, an uncompleted and continuously unrepaired eroding gully, compounded by unregulated sand-mining to feed highway and highrise residential developments, are exacerbating distress of their legitimate housing community.

These governmental actions must be addressed immediately through integrated governance and management by a nation celebrating 60 years of Independence as they constitute the same kind of Africville ‘environmental structural violence.’