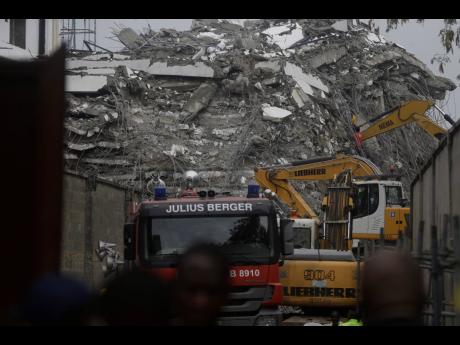 AP
A view of the rubble of the collapsed 21-story apartment building under construction in Lagos, Nigeria, November 2, 2021.

Jamaica remains a special case for sustainable development in view of its unique and particular vulnerabilities, categorised by the United Nations as part of the Small Island Developing States (SIDS).

Maximilien Pardo in The year 2020 or the Perfect Storm writes, “… SIDS are on the front line of the multiple climate and nature crises which are now being amplified by the global COVID-19 pandemic and subsequent economic shutdown … .” The question arises with June 1 when the 2022 hurricane season begins. Has vulnerability increased? Pardo adds, “… SIDS governments often need to reduce already limited public investments in critical socio-economic development and environmental sustainability in order to address direct disaster-related needs … .”

January 25, 2019, the Jamaica Information Service stated in an article: “Multibillion-Dollar Road Improvement Projects’ announced – a total of 66 projects undertaken in all parishes.” It also highlighted development of Jamaica’s Logistics Hub Initiative (LHI) and Special Economic Zones (SEZs) under the LHI, plus the Vernamfield development project in Clarendon, dubbed ‘Aerotropolis Jamaica.’ Then the COVID-19 pandemic hit.

However, continuing throughout the COVID-19 closure period, Jamaica advanced major public-sector ventures that resulted in destabilising many communities with bulldozing activities in their built and natural environments with the intensity and fury of a Category 5 hurricane. Thereafter, videos have gone viral showing flooding and landslides across Jamaican communities. Sadly, some are fatal.

Why is the breadfruit so ‘water-logged’ and I have to throw away half of it “… because all ova de ole a de land dem a flood out miss! …”. Understand the caregiver’s road-woe story because she is unable to honour her 8 a.m. shift, arriving instead at 9 a.m. after leaving St Thomas from 5 a.m. for Kingston, a journey that usually lasted one hour on a Saturday morning. The Gleaner article of April 25 ‘Some commuters in St Thomas stranded as cabbies protest’ said “The operators say that contractors on the ongoing Southern Coastal Highway Project have dug up various sections of the main thoroughfare, leaving areas in a deplorable state …” In Portland, teachers and students have severe difficulty getting to and from school now that face-to-face classes have been resumed.

Pardo continues, “… as the pandemic underlined and the climate crisis has long foretold, development pathways that are not risk-informed are neither sustainable nor inclusive … ”. Are the rural and urban communities risk-informed before, during, or after continuous development upheaval from highway construction, bauxite mining, high-rise residential construction, harbour dredging, and others? Are these projects that affect all sectors and various locations across Jamaica inclusive, which means allowing public consultations and engagement of affected citizens? Are rural and urban neighbourhoods being bulldozed without prior warning? Are alternative provisions being made to ease burdens on the citizenry? Why is the Healthshire [Hellshire] beach disappearing literally before our eyes inside the Kingston Harbour, which is considered the seventh largest natural harbour in the world?

Community advice offered through local traditional knowledge is often ignored. It includes pointing out that the hillside is unstable and susceptible to landslides, yet roads are being cut through these hills with insufficient retaining walls to restrain landslides thereby bringing down loose earth with buildings. Additionally, that some road elevations will hinder the natural flow of water into the harbour, yet inadequate culverts cause backup and flooding in cities, towns, and communities. They also emphasise that sinkholes are important parts of the Jamaica limestone Karst landscape with its aquifer network, yet mining takes place in the hills, causing predictable sudden flash floods in coastal towns.

With these disasters taking place continuously across communities after a regular afternoon shower of rain intensified by climate change and man-made actions, how, therefore, will Jamaica build resilience and mitigation for hurricane preparedness? UN 2030 Sustainable Development Goals are designed to help mitigate disasters and build resilience, but are we simply paying lip-service to sustainability?

In addition to natural disasters, there are other disasters linked to man-made events that require mitigation. The Jamaica Fire Brigade (JFB) and developers of high-rise buildings should begin a public sensitisation campaign, urged The Gleaner editorial of February 7, on the safety issues of living in multistorey apartments. Kudos to the JFB where Assistant Commissioner in charge of Fire Prevention Sean Martin indicated that they are prepared to carry out more regulatory oversight with increased inspections. “We have four hydronic platforms. These are two units that can be extended to a maximum of 115 feet but for safety reasons we extend to just 105 feet. You are talking about approximately nine or 10 floors – in terms of capacity, ” reported RJR News on February 12.

That same Gleaner editorial also said over many regulatory breaches of so many buildings, mostly exposed in court cases brought by neighbouring residents against developers and regulators. It recommended that the authorities “… should probably conduct an audit of all buildings above a prescribed number of floors, constructed over, say, the last three to four years, to determine whether they are in keeping with the codes …”.

Al Jazeera news reported on November 17, 2021: “Nigerian engineers say design of collapsed Lagos high-rise altered.” A 21-storey highrise structure still under construction in the upscale Ikoyi district of Lagos collapsed because it was originally designed for only six floors. Then more floors were added to the structure. At least 45 people, including the owner of the building, were killed. Investigations reveal “… clear indications of several design brief changes on the project, and the engineering and management of these changes appear to have been seriously inadequate …”. On May 2, another headline read: “Nigeria: Five dead after Lagos building collapse.” This one was a completed three-storey residential building.

Is the development arena fraught with what may be described as ‘Anansi’ tactics? Stories of the small but quick-witted Anansi outsmarting larger adversaries “… had much symbolic appeal to early slaves, and after the end of formal slavery, to blacks still living in poverty …”, remarks Ron Cherry in From Africa to Reggae: The Anansi Connection. Anansi’s dominant role throughout mythology of African origin, implies Cherry, is that of a cunning and crafty trickster who prospers by his wits.

In a quick chat with Professor Carolyn Cooper, I shared my desire to borrow her term to describe the built and natural environments to highlight the immediate need for appropriate mitigation and resilience strategies. Prof said its use was quite appropriate, “… (adjective) disorderly, irregular …”, listed in the Dictionary of Jamaican English as stemming from West African languages introduced during the period of enslavement. Jamaica is entering the 2022 hurricane season with “chaka-chaka” development affecting both built and natural environments. Therefore, with 60 years of Independence, resilient strategies must be put in place now.

Patricia Green, PhD, is a registered architect and former head of the Caribbean School of Architecture in the Faculty of the Built Environment at University of Technology, Jamaica. Send feedback to patgreen2008@gmail.com.