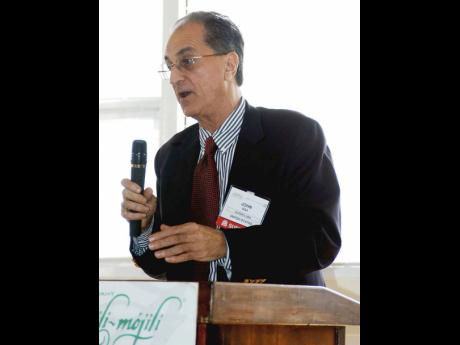 I find myself initially bemused then increasingly appalled at the intense public commentary on the off-again-on-again Festival Song competition.

This example of skewed priorities tells a cynic like me that Government plans to turn Jamaica’s 60th anniversary of “independence” into a celebratory carnival of distraction. Hopefully, nobody will notice Jamaica’s urgent need for structural reform after 60 years of economic and governance stagnation.

This gross over-reaction (which everyone knows is 144 times worse than a normal over-reaction) to a “no festival song” announcement followed by public disapproval from the Government Boss itself followed by a reversal of the decision to abort only exposes Government’s agenda.

Gun crime has turned our streets chaotic. Our children’s education has been neglected. Public health care is a “chronic”. An uncontrolled pandemic continues to savage life and welfare while Government fiddles. Infrastructure projects cause endemic, apparently endless inconvenience to citizens and unnecessary cost over-runs to taxpayers.

No problem, Mon. Wi gwine have a Festival Song!

Is it too much to hope that we’ll spend some of the time learning from experienced, accomplished patriots who, for decades, have been calling for needed reforms but whose entreaties have fallen on deaf political ears and “see and blind” political eyes?

One such patriot is tourism mogul John Issa, widely credited as the Father of the ‘all-inclusives’.

I should declare interest. John was chairman of Jamaica Tourist Board (JTB) in the 1980s when my father served in many capacities, ending as a deputy director of tourism. In 1992, years after John left, my father retired after decades of public service (including as a teacher and JTB officer). John took time out to write him a letter of appreciation which included:

“Those of us who have been around the industry for many years are aware of the invaluable contribution you have made to tourism. Because of your modest manner and the fact that a lot of your work related to product, I don’t think the public is generally aware of the impact you have had over the years in our great industry.”

I still have that letter. So, yes, I’m kinda biased towards John Issa and his monumental contribution to nation building especially in tourism. So sue me!

John has always exhibited a deep concern for the plight of the disadvantaged which he channels in many ways, but what interests me in Jamaica’s 60th year are his views on tax reform. He has been railing against the pernicious nature of the P.A.Y.E. system of income tax for 50 years.

VOICE IN THE WILDERNESS

In 1973, in an address to Ocho Rios Kiwani’s Club, he pointed out that tax collections were sluggish, but “for the past few years business seems to have been booming and project after project started”. He also reminded his audience that imports were increasing which could only mean personal earnings were “reaching new heights”. His explanation for the apparent conundrum was “I am convinced that the reason for this was and is that a very large number of persons in Jamaica who are earning taxable income are not paying their income taxes.”

“It’s vital at this time in the development of our country for all citizens to recognize their responsibilities and pay all just taxes levied upon them. For too long now the P.A.Y.E. earner has been carrying too large a share of the tax burden.”

John called on all citizens to pay their fair share of taxes or, he warned, that Government would be forced “to keep borrowing the country down the road to bankruptcy in order to cover estimated expenditures [or] introduce new taxes”. Not even he contemplated the actual future which was that successive Governments would do both.

He returned to this topic in 1990 in an address to the Rotary Club of Kingston in which he called P.A.Y.E. “one of the greatest abominations and obscenities accepted by us …”. He used the example of a worker earning $200 per week having to pay 33 per cent [the then rate] of wages in tax up front, “yet everybody knows that thousands of self-employed persons and private business persons earn substantially more and pay no tax”.

“It is an obscenity and a violation of justice of the highest order to consider taxing anyone’s income below $500 per week [in 1990] especially when the Government and its revenue department and, for that matter, all intelligent people must admit that possibly half the income generated in Jamaica, if not more, is outside the tax net and not taxed at all.”

Governments continued their abuse of Jamaican P.A.Y.E. workers without shame so John spoke again in 1992 and again in 2009 hammering the same theme. In 1992, while addressing the Montego Bay Lion’s Club, John deplored “the dramatic decline in the quality of life in our Dear Jamaica during the last 20 years”.

“This decline has not just been in the material quality of the lives of most Jamaicans, but also in the moral quality of Jamaican society.

“It would be stating the obvious to repeat all the examples of moral decline such as corruption in the public and private sectors, increase in crime, crude behaviour, etc, etc.

“We only have to read or listen to media to review the catalogue of social rot.”

Just a reminder: John was speaking in 1992 NOT 2022. He called for the identification of causes and development of solutions instead of just listing the problems. He said:

“I have come to the following conclusion: One of the major causes of our decline …is our whole system of taxation, its inefficiency and the unfair manner of its collection.

“This is the single greatest organised injustice in the country today.”

He again spoke of the inequity between the taxation of employed and self-employed people but, this time, he came armed with statistics:

Would anyone at Ministry of Finance care to update these numbers?

John called for a more equitable tax structure beginning with a substantial increase in the tax threshold. But persons who stay outside the tax net while earning vast sums aren’t encouraged to come into the tax net by threshold increases. So Government tries to entice persons into the tax net with offers of “grants/relief packages” (upon opening formal bank accounts) and magic new national identification cards.

The Opposition has recently been wooing voters by calling for a reduction in the gas tax which it had every opportunity to cut, but didn’t see the need when in Government. In Opposition the mantra is (apologies to James Chambers) “I can see clearly now”.

John Issa has spent a lifetime fighting for tax reform on behalf of oppressed P.A.Y.E. workers. I thank him for that. But I go further than John as I don’t see a threshold increase as enough. Nigel Clarke has been trumpeting Government’s policy shift towards indirect taxation since he was sent to Heroes Circle. He has an opportunity to put Government’s money where his mouth is. For our 60th birthday, can we enjoy a Festival Song AND crucially needed tax reform?

I maintain that Jamaica doesn’t need to reduce the gas tax. It needs to abolish the income tax. What’s certain is imposing BOTH compounded by the obscene rape of P.A.Y.E. workers while tax evaders operate with impunity is oppressive. If Nigel truly believes in the equity of indirect taxation, as I do, he’ll start working towards a complete reliance on indirect taxation thus ending the oppressive income tax regime. It’s the only credible way to ensure, as John demanded 50 years ago, “all citizens recognize their responsibilities and pay all just taxes levied upon them”.

Don’t tell me it can’t be done. Examples of countries who did it include Bermuda, Monaco, The Bahamas, and United Arab Emirates (UAE). Pre-pandemic Bermuda was growing by 3+ per cent per annum; Bahamas by 2.8 per cent; Monaco, seven per cent; and UAE, whose economy isn’t as oil-dependent as widely believed, by 3.4 per cent.

A November 2011 paper written by Hubert G. Scarlett of BOJ’s Research & Economic Programming Division found “increasing revenue from indirect taxes is more conducive to economic growth in the long run. On the other hand, increasing the share of taxes from personal income (P.A.Y.E.) has the greatest harm on per capita GDP over time … .”