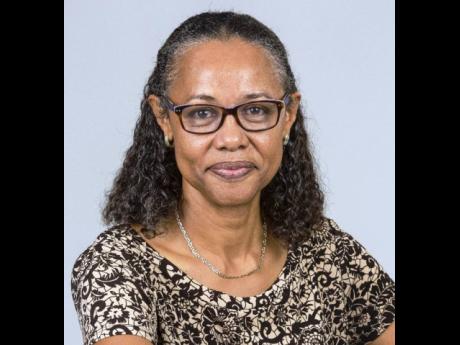 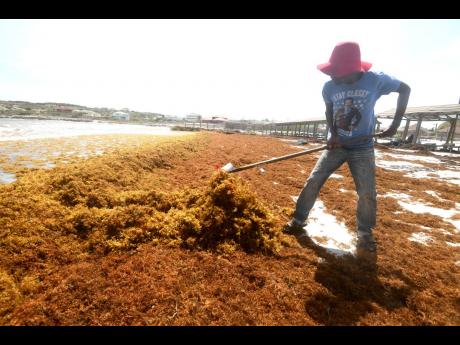 File
Sargassum seaweed, if left in huge piles on a beach or in the water near the beach, begins to rot and can cause severe reduction in oxygen. The rotting weed also produces hydrogen sulphide (a toxic gas that smells like rotten eggs).
1
2

The 2022 sargassum season has begun. For the past 11 years, Jamaica and the Caribbean have experienced masses of floating brown algae that often end up inundating beaches. Although small quantities can begin arriving from March, we now know that the large influxes usually start in May and end in November. 2018 was an exceptional year when there was a record 20 million metric tons of sargassum throughout the Caribbean from January to December (sargassum outlook bulletin from University of South Florida – https://optics.marine.usf.edu/projects/saws.html ). Similar quantities were recorded in 2021 and now again in 2022.

Sargassum seaweed has been called “the golden floating rainforest of the sea” because it provides a home for numerous marine animals, some of which are found nowhere else. Many other species feed and hide from predators under the mats of floating seaweed. Indeed, fishers report that they are able to catch large fish when the sargassum is in the sea. However, when the massive blooms wash up on to beaches and into shallow near-shore waters, we have grave problems.

Sargassum seaweed, if left in huge piles on a beach or in the water near the beach (as seen in Hellshire Bay), begins to rot and can cause severe reduction in oxygen. The rotting weed also produces hydrogen sulphide (a toxic gas that smells like rotten eggs). The rotting seaweed also stains the seawater brown. Fish and invertebrates in the water die due to low oxygen and the presence of the hydrogen sulphide, and indeed, fish-kills have been reported at Hellshire beach and now Port Henderson, likely due to the presence of large quantities of rotting sargassum.

Sargassum also helps to erode beaches as the waves that pound the shore are made heavier by the floating sargassum thus removing sand, which is washed offshore. In addition to making the beach unpleasant and unusable, and killing especially small fish, fishers report entangling of their nets and engines by the seaweed mats such that engines overheat and nets become full of seaweed, rather than fish, causing them to spend hours cleaning their gear.

Since the start of the sargassum inundation we have explored uses for the algal biomass that will help fund its collection and removal from the beach and nearshore waters. A plethora of uses have been identified, and colleagues from Barbados have produced a 172-page Sargassum Uses Guide. The guide documents sargassum use in construction (to make bricks), to manufacture fertiliser and biostimulants, in biogas production, in pharmaceuticals and cosmetics, to make bioplastics, paper, plant-based leather and rubber, in water purification, to make lubricants, and in environmental restoration. Companies like Algas Organics, based in St Lucia, and others have established factories that produce fertiliser from sargassum. There is a challenge because sargassum naturally contains high levels of arsenic, but these companies have developed technology to remove the arsenic so that their product is safe for use on food crops. However, use of the unprocessed sargassum can transfer unacceptable levels of arsenic to foods.

Despite its value and potential uses, there are many unresolved issues associated with sargassum ‘harvesting’ for industrial-scale use. The seaweed strandings are variable in time, space, and quality, and it can still be difficult to predict where, on which beach, and when large quantities will be found. Harvesting the resource from the beach can be very costly and can damage the beach by removing sand or causing compaction (via heavy machinery on the beach). Harvesting from the water is the best option, but that, too, may require expensive booms and specialised boats, depending on the quantity needed. However, scientists from Massachusetts Institute of Technology have invented a collecting device that can be fitted to any boat and used to fish sargassum from the water in mesh bags, which are then taken ashore or, as is now being explored, forced below the surface to the deep sea floor. Research has suggested that this action could be good for the climate as the sunken sargassum mass helps to remove carbon dioxide from the atmosphere and surface waters and aids in carbon burial in the deep sea.

NEED TO BE EXPLORED

All of these uses need to be explored. Currently in Jamaica, we still only see the seaweed as a nuisance that is to be endured, or when it is really bad, removed from the beach and dumped. At present, only one company, Awganic Inputs, has attempted to manufacture products from sargassum.

There is more than enough sargassum to go around! Indeed it is very difficult to collect and use 20 million metric tons of seaweed. It means that we must also take measures to reduce the quantities of the weed floating in Caribbean waters. Nutrients (primarily from agriculture and sewage discharge) in the Caribbean Sea help ‘feed’ the sargassum. Like any plant, sargassum grows when it is fertilised, and so we need to also reduce our nutrient inputs across the region. Climate-change effects have provided the ‘trigger’ for the unusual occurrence of sargassum, but excessive nutrients support its growth and maintain the masses that cause these damaging inundations. As indicated by Dr Brian Lapointe, “To fix the sargassum problem, we need to make significant policy changes to reduce the oversupply of nutrients (in the Caribbean), including proper treatment of our sewage, managing fertilizer use and stopping deforestation.”

So while sargassum movement through the Caribbean may indeed be the ‘new normal’, the quantities could be controlled by environmental stewardship (which would also benefit our dying coral reefs) and local change in attitude such that we regard the seaweed as a seasonal resource. Many marine species are harvested seasonally, with the ‘fishery’ structured around availability, storage, processing, and product development for local or overseas markets. As part of our ‘Blue economy’ explorations, could we begin to see sargassum as a marine resource that is waiting to be exploited?

- Professor Mona Webber is director, Centre for Marine Sciences, The University of the West Indies, Mona. Send feedback to mona.webber@uwimona.edu.jm.