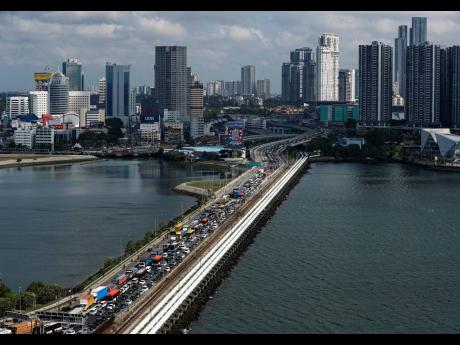 REUTERS via ANI
Johor–Singapore Causeway that links the city of Johor Bahru in Malaysia across the Straits of Johor to the district and town of Woodlands in Singapore.

“It is not only what we do, but also what we do not do, for which we are accountable,” Moliere, French playwright and poet.

The public defender told a parliamentary committee in January 2019 that nearly 4,000 people were detained during the St James state of public emergency, yet only four per cent of the detainees were charged. The court has now awarded $17.8 million to St James taxi operator Roshaine Clarke whose fundamental rights were violated when he became a detainee.

“The right to enjoy a healthy and productive environment free from the threat of injury or damage from environmental abuse and degradation of the ecological heritage” is carried in Chapter III of the Charter of Fundamental Rights and Freedoms (Constitutional Amendment) Act, 2011. The alliance Citizens Rights to the City (CRC) met with the mayor, town clerk, senior administrators and councillors at the offices of the Kingston and St Andrew Municipal Corporation (KSAMC) on April 27.

They argued their fundamental rights regarding developments across their neighbourhoods. Mayor Delroy Williams responded to issues raised, that the KSAMC needs first to consult their attorneys-at-law. This has conveyed to citizens that performance and responsibility criteria under the 2018 Building Act governing and mandating operational procedures of the KSAMC now reside elsewhere.

Is it now the practice that requisite routine governmental operations must employ public sector funding to engage legal services? Is it possible that some reasons for unresponsiveness and tardiness of the various governmental entities may be budgetary constraints over legal services? Is it that attorneys are now being relegated by these various public sector entities to handle operational procedures instead of trained, technical built and natural environment professionals and experts?

Minister of Industry, Investment and Commerce Aubyn Hill, says Jamaica stands to benefit significantly from investment in special economic zones (SEZs) and the country’s bid to become a global logistics hub. Reported April 6th by the Jamaica Information Service (JIS), Minister Hill cites the example of countries such as Singapore, Israel and Qatar, with relatively comparable populations as Jamaica. Prime Minister Andrew Holness addressed the World Free Zones Organization (WFZO) Eighth Annual International Conference and Exhibition on June 14 in Montego Bay, that Jamaica’s “mission is to leverage these natural assets and position Jamaica as the fourth global logistics mode, comparable to Singapore, Dubai and Rotterdam”, records the JIS. President of the Jamaica Promotions Corporation, Diane Edwards, told the JIS that “we want to become a logistics-centred economy and a logistics centre equivalent to Dubai, Rotterdam and Singapore”.

Parallels with Singapore are commonly repeated. Various presenters mentioned Singapore at the Jamaica 60 Diaspora Conference, under the theme ‘Reigniting a Nation for Greatness’ from June 14 to 16 by the Ministry of Foreign Affairs and Foreign Trade.

The website of the Singapore Urban Redevelopment Authority (URA) tagline, “To make Singapore a great city to live, work and play”, identifies Singapore as a ‘small state’ that focuses on the future to optimise its limited land to “meet the needs of current and future generation”. URA undertakes firstly, comprehensive planning that takes the long-term approach of urban development, “holistically balancing the social, economic, and environmental considerations”. Secondly is integrated planning, working closely as partners with both government agencies and the public to produce and review the master plans.

Singapore’s comprehensive and integrated planning balances three considerations: (1) social; (2) environment; (3) economic, all overlapping into its ‘sustainability’ goal. The aim is to provide a quality living environment, offer plentiful growth opportunities and jobs for the people, and safeguard a clean and green landscape.

Planners and architects at URA use data analytics and geospatial technologies for deeper insights and more informed decisions in planning for land use, amenities and infrastructure. For example, they predict potential impacts of hurricanes for responsible urban site placement and mitigation strategies of development projects, critical for multi-storey investments.

All, including persons outside Singapore, are able to access freely and readily the URA interactive physical models also online virtual models showing areas across the entire country. This provides opportunities to chat with technical and other personnel for informed guidance about developments next door and inside your neighbourhood, or as a potential developer/investor.

The Singapore Master Plan was approved in 1958. It has undergone 10 reviews and various amendments, the last in 2019. Its Concept Plan mapping out long-term land use strategies is reviewed regularly and translated into its detailed land-use plans for the different planning areas, to form the overall master plan.

The 1958 Jamaica Town and Country Planning Act is the current legal document under aegis of the National Environment Planning Agency (NEPA) working with Vision 2030 Jamaica to make “Jamaica the place of choice to live, work raise families and do business”. NEPA manages the national spatial plan, ‘Jamaica National Physical Plan 1970-1998’, that guides future development. It enables various Parish Development Orders with varying status of ‘provisional’ or ‘confirmed’, as the legal documents used to guide development in respective areas.

For example, the Kingston Development Order was confirmed 1966, and in 2017 came the ‘Kingston and Saint Andrew and the Pedro Cays Provisional Development Order’ (PDO), which is still unconfirmed. Note that the court has ruled this 2017 PDO is material evidence in fundamental rights litigations over development projects across the Kingston Metropolitan Area.

Connecting Singapore and my recent visit to St Thomas parish, I appreciate firsthand the numerous issues raised by its residents. Where are the comprehensive and integrated St Thomas development plans lodged accessible for scrutiny by all, including potential investors? Where are impact assessments over quarrying, mining, landslides and the Roselle Falls heritage site? Developers are surveying properties there after posting notices (some destroyed by weather) on light poles while citizens remain unaware, including some pending eviction notices. Would this scenario be replicated in Singapore?