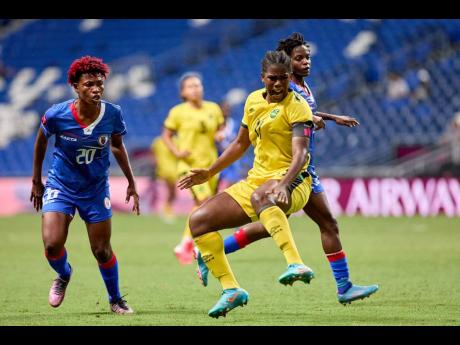 Jamaica received a magnificent 60th birthday gift as the Reggae Girlz overcame many obstacles to qualify for our second consecutive World Cup.

They clearly had a point to prove after the fiasco regarding their former coach. They played like ladies with many points to prove and proved every single one. Perhaps I should have taken their outburst more as a last resort born of extreme frustration than a disrespectful dressing-down.

On May 22, regarding turmoil in international sports, I wrote:

“The world of sport seems to be suffering from a severe bout of long COVID.

Take the Reggae Girlz, for example. They seemed to be going along nicely. Team spirit appeared admirable. Despite obvious preparation problems, their professionalism and performance on the field of play, although far from flawless, was of a high enough standard to get them comfortably through to the final stages of World Cup Qualifiers. Fans, disappointed by the Reggae Boyz scatter-shot tactics and questionable commitment to Jamaica, settled down to enjoy the Girlz’s journey, win or lose.

Then came that letter! That letter was leaked to media. Sensational details of the team’s disgraceful dressing-down of the coach were bruited about in the public domain and available for excruciating examination, scandalous sharing, and snickering suss.”

Well, in hindsight, maybe that was a tad harsh. Mebbe…

“Now, sinking in a cesspool of their own making, the Reggae Girlz have as much chance of qualifying for the World Cup as I have of flying backways on a broomstick to the Moon. So I hope they’re happy.”

I suspect they are. So am I but I’m also blushing, ordering my meal of fried crow (no salt) and searching Amazon’s website for a suitable broom.

“It’s beyond sad Phil isn’t in this year’s [PGA Championship] field defending his title. Why? He withdrew because of a furore, fuelled by traditional media, over a breakaway league backed by Saudi Arabian oil money about which Phil has come out in full-throated support, saying that he expects the new league to give players leverage for better deals from the PGA.”

Despite gratuitous mass abuse of Phil, especially by traditional American media like Golf Channel’s Brandel Chamblee who referred to LIV Golf as “a blight on golf”, I pointed out:

“Lookie here. I understand this is a self-inflicted wound because like the Reggae Girlz, all Phil had to do was shut up and go about his business. Still, I’m intellectually offended by the uproar created by traditionalists as if this hasn’t historically been the tool used by athletes in every sport to get more from commercial exploitation by governing bodies of their talent.”

Chamblee was born in Missouri (well, whaddaya know?). He looks and sounds like a Southern gentleman mourning the loss of the Confederacy. In a career “blighted” by mediocrity, Chamblee won only one PGA event (the Grade B 1998 Greater Vancouver Open in Canada) and no international events before settling for a sinecure as a Golf Channel “analyst” where he petulantly carps at successful players.

For too many years he served up only back-handed compliments to Tiger Woods while praising Phil to the skies until the numbers (and colleague analysts) forced him to grudgingly recognise Tiger’s greatness. I wonder if, in Brandel’s tiny brain, Phil isn’t so much a traitor to golf as a traitor to “nationalism”.

I gently reminded the assorted has-been or never-was golf analysts that professional sports has always been about the money and that, while leagues do their best to commercially exploit talent at the least cost to the league, talent will strike back by seeking more. But the incomparable arrogance of Americans who would call LIV golf a “blight” for the simple reason it’s not the PGA further exposes the inherent jingoism of a country that calls its national baseball championship “The World Series”.

For the average, narrowly educated American, slavery is “involuntary relocation” and any sport that’s played beyond “sea to shining sea” is inferior. When it’s backed by countries (wealthier than USA) run by non-whites, then it becomes heretical. Their human rights records are used to disparage their attempts to compete.

So let’s talk about human rights records, shall we? For 250 years, USA’s treatment of non-whites has evolved from slavery, abominable brutality, rape, murder and officially sanctioned genocide to despicable discrimination, brazen brutality and monstrous murder (of individuals like George Floyd and mass shootings of arbitrary minorities). But, all of a sudden Jamal Kashoggi’s loathsome murder in a State-sanctioned operation is held up as reason for professional golfers to boycott a Saudi-backed golf tour.

At the end of May when I wrote that fateful column, traditionalists were still smirking that only old-timers like Phil, Lee Westwood, Ian Poulter and the like were signing up to earn easy cash at the end of their careers. Well, it must have come as a shock to snickering American orthodoxy when the likes of multiple major champion Brooks Koepka, Masters Champions Patrick Reed and Sergio Garcia (The Old Ball and Chain’s least favourite golfer); young future stars like US Open Champion Bryson ‘Mad Scientist’ Dechambeau; two-time major champion Dustin Johnson and many more joined up.

Many, like Reed and Garcia, simply resigned from the PGA Tour rather than suffer the indignity of being banned (PGA has been banning LIV golf players indiscriminately) for making a commercial decision.

The LIV Tour has introduced fresh gimmicks (shoot-out style) and shorter tournaments to liven up the game. In that regard, conventional reaction reminds me of the loud tut-tutting behind which cricket traditionalists hid when coloured clothes, white balls and fielding restrictions were introduced by Kerry Packer or when TV forced tiebreakers into tennis. Now T20 has dominated cricket for years but is now evolving into T10 and the Williams sisters have revolutionised tennis fashion and tennis playing.

Last month, in Sweden, the Volvo Scandinavian Mixed, which became a co-sanctioned event between the Ladies European Tour and DP World Tour in 2020, saw 78 men and 78 women playing for the same total prize fund (winner gets 16.7 per cent) of US$2 million and one trophy. This was justifiably considered a very big deal and a giant step in the right direction for traditional golf. Sweden’s 22 year-old Linn Grant stormed to a sensational nine-shot victory (66; 68; 66; 64; 24-under-par) and became the first female winner on the DP World Tour.

On this planet, money talks and you-know-what walks!

The PGA and the DP World (formerly European) Tours have suddenly awakened from a century-old slumber; joined forces; announced jointly sanctioned tournaments; and offered significantly increased prize money. This week’s 150th Open Championship is being held at St Andrews, Scotland, the home of golf. The R&A group of companies (formed in 2004 to take on the responsibilities of the Royal and Ancient Gold Club for running the tournament) has permitted PGA; USGA; DP World; and LIV Golf tour players alike to compete.

In a strongly worded statement on Tuesday, R&A CEO Martin Slumbers, while criticising LIV golf for “undermining” merit-based golf and traditional pathways from grassroots golf to professionalism (supported and encouraged by R&A) stated categorically that banning players from The 2023 Open Championship was NOT on R&A’s agenda.

How long will it take the PGA Tour to acknowledge that competition from Saudi Arabia is no more or less offensive than competition from Asia; Japan; Australia; or South Africa, all of which have independent tours? How long before it rejects thinly veiled prejudices tinged with racism or jingoism and welcomes LIV Golf as an expansion of the sport, not an enemy of America?