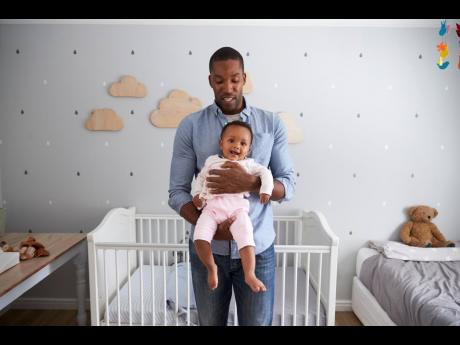 The intention to introduce paternity leave for public sector workers demonstrates a recognition of the role fathers should play in childcare and also establishes an expectation for fathers to live up to this role.

I heard music earlier this week as Minister Nigel Clarke announced that the Government intends to not only extend paid maternity leave but to also introduce paternity and family leave, coming out of the public sector compensation review. I like...

I heard music earlier this week as Minister Nigel Clarke announced that the Government intends to not only extend paid maternity leave but to also introduce paternity and family leave, coming out of the public sector compensation review. I like this review. I like it a lot.

This move on the part of the Government seems rather composed and unagitated and did not require any tugging and pulling from special-interest groups. This makes the announcement even more welcome, as we know the decision was well thought out and has been a long time coming. It will also set a precedent for the private sector, much of which makes no provision for paternity or family leave.

The intention to introduce paternity leave for public sector workers demonstrates a recognition of the role fathers should play in childcare and also establishes an expectation for fathers to live up to this role. As I have said before, fathers should not be seen as back-seat parents who only appear on occasion to pet their child’s head, comment on his or her cute face and leave. Fathers should get more comfortable doing the ‘dirty’ work and for extended periods of time.

The more evenly mothers and fathers share childcare responsibilities, the easier it is for mothers to build careers and to advance professionally. On a wider scale, if fathers, as a demographic, take more of the pressure off mothers, women of childbearing age will be less discriminated against in hiring processes and in workspaces generally, for their assumed unreliability at work.

Beyond women and their careers, young children simply need their mothers and fathers.

Perhaps the most impressive part of the minister’s announcement was the introduction of family leave for adoptive parents, supposedly with children of any age. Fantastic. Amid a situation in which the adoption process in Jamaica is not only long but tedious, adoptive parents need motivation to stay the course. Adoptive parents must have the support of the Government, since, outside of adoption, wards of the state would be left in state care, which we can’t swear is very good. Adoptive parents actually provide a service to the country (whether they see it that way or not) that often goes unacknowledged. The introduction of family leave moves the emphasis away from biological parenthood and acknowledges that a child’s primary caregiver, whoever he or she might be, needs support.

And then soon will be the argument that the Government can’t afford to support so many ‘idle’ public sector staff. If we are real about this issue, committed mothers and fathers of newborns are hardly ever the most dedicated at work. Priorities shift along the roller-coaster ride of life. For the average mother returning to work two months after childbirth, her baby is still foremost on her mind. She may hurry back to work because of financial pressures, but it’s quite likely that her output will not be the greatest at that point. Between extended lunchtimes, early departure, late arrival, and occasional trips back home in the middle of the day, parents of young children are performing a balancing act.

How does this solve the issue of reduced productivity? It doesn’t. An absent parent is clearly less productive than a distracted one. But what parental leave does is allow parents of newborns to actually focus on parenting at a critical stage in their child’s development, instead of making a big mess trying to figure out how to be a parent while reintegrating back into the workspace both at the same time. When the parents do return to work after their (brief) stint of parental leave, they return less burnt out and they return a greater asset to the public they serve daily.

DEVIL IS IN THE DETAILS

With all that has been said, it would be remiss of me not to note that, as they say, the devil is in the details. It is good to know that the Government is planning to introduce paid paternity and family leave. Anything, at this point, is better than nothing. And currently, on the matter of paternity or family leave, we have nothing. But since we are in the planning stages of things, I may as well throw my suggestion in the mix, albeit through the channels of this newspaper.

Congrats! You solved the first riddle.

Just like that, we have helped the finance and public service ministry iron out a few of the kinks they were grappling with. Mothers can abuse maternity leave and in fact, some do. Similarly, I don’t think it can be argued that no father will ever abuse his paternity leave. However, that is no basis upon which to limit fathers as a demographic from early childcare opportunities. In the same way that mothers are allowed up to three occasions of maternity leave, the same can be afforded to fathers.

Last one. Adoptive parents have a job no less difficult than that of biological parents because they must often navigate the complexities of parenting an unfamiliar child who also finds them unfamiliar. Therefore, adoptive parents should get ________. (Okay, you couldn’t have possibly guessed that one.)

Adoptive parents, I hope, won’t be left clutching after the scraps from the roll-out of the public sector Christmas presents. I see no reason why a differentiation needs to be made here between the leave benefits to adoptive parents as opposed to biological parents. So, to answer the question, adoptive parents should get no less than that of biological mothers and fathers.

It’s early days yet, and hopefully the implementation of these forward-thinking and progressive government policies will be quick and seamless. It is great to see the Government thinking ahead and thinking independently, and for that we owe an applause.