Mark Wignall | Marching up the down escalator 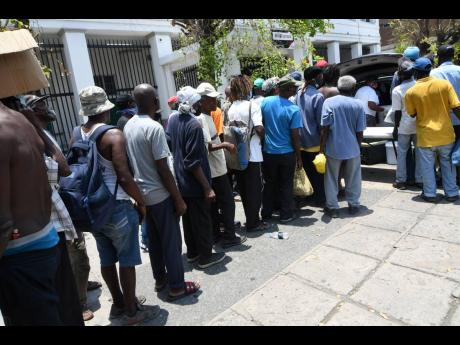 File
Two million of our people are underfed because they do not have the funds to sufficiently stock the kitchen cupboard.

Jose Martí, the national hero of Cuba, once said: “Liberty is the right of every man, to be honest, to think and to speak without hypocrisy.” But it ought to follow that liberty includes a man making a fool of himself in being dishonest and...

Jose Martí, the national hero of Cuba, once said: “Liberty is the right of every man, to be honest, to think and to speak without hypocrisy.”

But it ought to follow that liberty includes a man making a fool of himself in being dishonest and indulging in hypocrisy just so long as any hurt he causes is directed inward. That is, he hurts only himself.

In the 1960s, there was a time when pessimism was on a long holiday. Children knew of something called independence and viewed it almost in the same light as Christmas. We didn’t know its exact shape but we felt the little bits and pieces of excitement.

Among adults it would be difficult for any to express the view that hardly anything good would come of us. That hyperbole also took an extended holiday. Hope was possible.

The Webb telescope is an awesome expression of man’s technological expertise. It peers back into our cosmic past. If our people in Jamaica would use the many glimpses of our past as guide to a better realisation of our socio-economic possibilities we would point ourselves to a promising future.

Unfortunately, pessimism has returned from its holiday. “I cannot see us finding a workable path to a socially strong and economically viable society. Endemic criminality is throttling us,” said a school principal friend of mine one day last month.

It must be mentally difficult for law-abiding Jamaicans to admit to themselves that the basic menu items needed for Jamaicans’ path to prosperity are not on the table.

Politically, Prime Minister Andrew Holness is held hostage by the uniqueness of the moment. One, the country is recovering from the economic savagery of COVID-19 even as the malady cooks up an unpleasant stew in its endemic phase.

Two, it must give the superlative to the conundrum that the unemployment rate is at its lowest ever at just over six per cent while two million of us are underfed because we do not have the funds to sufficiently stock our kitchen cabinet.

Three, our highly popular finance minister, Dr Nigel Clarke, is never short on touting the many ‘care’ programmes that are on offer. But how long can a society exist with this approach? At some stage a hefty package must trip in if that approach is to be sustained.

I have read local reports which state that food poverty is stable in Kingston but growing in rural areas, coupled with internationally generated ones screaming at us that two million of our people are underfed because they do not have the funds to sufficiently stock the kitchen cupboard.

It is no wonder that anger is growing as hunger growls. A friend of mine who lives in Atlanta emailed the following: “From where I am it seems that just about everyone in Jamaica is tense, on alert, short-tempered, hungry and angry. Simple disputes end in death. Mr Holness and his fellow Jamaica Labour Party members may feel smug that the People’s National Party (PNP) offers no real serious challenge to them. Mr Holness may even call snap general election soon to see off Mr Golding and the PNP. But what about the people of Jamaica? There is no crime plan (well, if you call it a crime plan the Joint Anti-Gang Task Force). People in Jamaica are not safe, anywhere. Uptown, downtown, country, even in the hills. So, if Mr Holness wants to leave a meaningful legacy of his time in office, what is he going to do? Well first, more than he is doing now. Second, show some leadership and not just condemn crime and make artful speeches when Jamaicans are slaughtered.”

TALKBACK GETS YOU KILLED

I knew her when she was in her 20s. I was then in my mid-30s. I now remember my late friend Tino Geddes as we would visit the delightful bar she worked at in Grants Pen, St Andrew.

One thing about her that never changed was her sassy mouth, something I admired especially where being a ‘mere barmaid’ opened her to much abuse. In 2022 she was in her 60s and she owned a bar and employed three people, including her daughter.

A few weeks ago her sassy mouth was on display as a young fellow threatened to ‘box her down’. She refused him service and told him not to return.

Early last week she was seated on a stool outside the bar. A man approached her and said he wanted a drink of rum. As she was about to fit on her slippers he pulled a gun and shot her directly in the head. Community reports suggest that she died instantly. How did we come to this?

A Jamaican contact of mine who lives in Florida and works in law enforcement suggests a possible solution. “I understand that the extradition regulations have been revised/streamlined (I am not certain what was done and need to research this). But assuming it is easier to extradite, why not ‘inform’ on the many criminals in Jamaica who are wanted in the USA and let the USA have them for prosecution. Jamaica saves money and gets rid of some bad people. I have been told there are quite a few in Jamaica, but they have ‘protectors’ in Jamaica and are ‘untouchable’, according to US law enforcement.”

CAN YOU LOCATE FLOW FOR ME

On June 15 I applied for broadband internet from Flow. As of Thursday, July 14, I am still without the requested service. In my previous interactions with the internet provider, it seemed that no matter how much one paid on a bill somehow there would always be a balance.

It gets worse. In literally pleading with Flow for internet installation it had the temerity to send me an ebill on July 12. It was ridiculously small at $300.50, but how could I be billed for a service I did not have?

On July 2 while I was in the horrible Flow chat (all courtesy, no actual service) it was revealed that the telephone contact they had for me was not my number. The matter was clarified. Or so I thought. On two other dates Flow told me their technical people could not make contact with me. They were still calling the wrong number. Last Thursday, a lady from Flow called me and again said the technicians could not contact me. They were still calling the wrong number while she had the correct one.