Mark Wignall | The land of beauty and eulogies 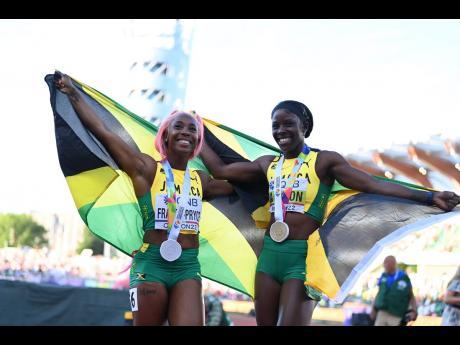 If you are now floating between enjoying your usual good moments and gliding over a disturbing valley of despair, welcome to Jamaican reality. You are not alone. If you are like me, you may be tempted to exist in the glory of our female athletes...

If you are now floating between enjoying your usual good moments and gliding over a disturbing valley of despair, welcome to Jamaican reality. You are not alone.

If you are like me, you may be tempted to exist in the glory of our female athletes and use it as a safe psychological cover until the next painful blood-and-guts horror story becomes our reality.

As I write this column, the 200 metres final for women is still to be run. My perfect mental crutch would be knowing Shericka has won. But I would still be in la la land if ‘Mommy Rocket’ Shelly-Ann Fraser-Pryce snatched it away. Or if Elaine had a nibble at it.

How many of us are caught up in being forced to decide over which is worse. Domestic-derived killings or gangland-styled murders? And what is it that can be done to rid our minds of this strident, pressing expression of collective stress?

I grab again at our champion ladies. If, as I expect, Shericka wins, our Mommy queen Shelly-Ann would understand that need for bridging time and athletic competition. Plus, Elaine would use that time to fix whatever it is that ails her.

And we would also gaze over to Oblique Seville and know that the development among our male athletes is far from an also-ran roster.

We are constantly reminded of the extent to which violent criminality places an understandable brake on economic development in Jamaica.

It has been conservatively estimated that crime (and it must be assumed, the pervasive type) costs the country about $100 billion.

If I should use myself as an example, I have cut back on my social activities by about 60 per cent. Or to put it another way, I have accepted my immersion in digital communication.

But there is also the very real fact that the bravery or the foolhardiness needed for playing heroics must taper off.

Lawless men, and even their hot-headed second lieutenants of the 1970s and 1980s, would once refuse to sully the ‘honour among thieves’ fable by not actively drawing the blood of women, children and the elderly. Now, their youngest children and all their grandchildren are brawling murderers. Unlike yesteryear, very few of this set could meet me in any social understanding. It therefore suits me to avoid them.

The Government and, in general, the Jamaican business community are very definitely gung-ho on where they see the economy now. I am hoping that the favourable assessment is not purely tainted by the social distance these leaders have from the man and woman at street level.

I say that because those ordinary folk are not there yet on the optimism scale.

Even so, the very fact that Jamaica’s unemployment rate is at historic lows must be congratulated.

At the same time, it has been driven home to us that our local private sector is suffering from a lack of labour, and importation of needed labour is imminent. Let us be clear in this understanding

It is not necessarily a Marxist throwback to stress that capital needs an excess of labour, because, at a certain high level of this pool, it provides our private sector the best reason to artificially keep the cost of labour low.

I know that the labour needed is not exactly the type where men pushing wheelbarrows are desperately needed. So automatically, it draws a very direct bead on something which is not exactly a secret. Our education sector has failed us. It needs to accelerate its reform.

What we really need because of this is more tech professionals and administrators in that area. And urban development professionals.

He is either much too belligerent or just unlucky with the police.

Everton Richards is 60 years old and he has been operating his roadside stall for the last 30 years. Everyone knows him as ‘Shut’.

“When mi set up mi stall mi hair did black. Now it white.”

“So why yu go court so often? It no better yu just behave yu self,” I said.

“Is just likkle ganja, Missa Mark. An’ cigarette and bun.and cheese and drinks.

I asked him if the arresting officers have ever shown up in court. “Dem nah go bodder wid dem small tings dey so cha …,” he says, while wandering off.

“So when are you heading back to court on your new charge?” I asked.

“ME is not nobody special and mi understand dat, but mi want stop spending mi money a court.”

The video which covered the daylight shoot-out between two licensed firearm idiots in MoBay has either added to our stress, or it must be plain comic relief.

But a real relief that no innocent citizens were unduly harmed. Road rage? One assumes that both guns have been seized. Before the owners are…

I cannot imagine the rationale that would be proposed by the brightest attorney that could justify such action.

In a comedy movie it would probably go something like this. “Your Honour, I am representing both men and I would like to use my many years’ experience to assist the court in declaring that both of my clients are innocent.

“I stand tall in making such a declaration, Your Honour, because I know for certain that I am a damn fool.”