Gordon Robinson | Jamaica is still alive … in spite of it all 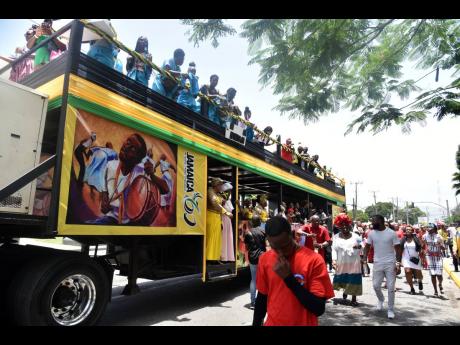 Kenyon Hemans
So by all means let’s celebrate. Let’s enjoy float parades; festival dances; competitions; Grand Gala. Give thanks and praises. We do have something to celebrate. Jamaica is still alive. And while there’s life, there’s hope.

Give thanks and praises

We are still alive.

Though the road was rocky and the hills were steep

We put the faith and trust inna di Father

So give thanks and praises we are still alive

When Roy Rayon won his second Festival Song competition in 1987, Jamaica was twenty-five years old and the original lyric was:

Give thanks and praises

The original record credits Roy as author, but I suspect Grub Cooper had a lot to do with the music (it just has a “Fab-5” feel). As the years went by, demand for the song at Roy’s live performances remained high, but he adjusted the lyric. Probably unintentionally, the adjusted lyric oozes well-merited sarcasm and brilliant satire of Jamaica 60 “Celebrations”.

But Jamaica’s greatest national achievement in 60 years of Independence has been to survive. Governments love to sidle up to artistes and athletes’ magnificent performances over six decades, hoping voters will infer at least partial credit and give political benefit. But those were individual efforts motivated by individual ambition and talent.

National policy is all about devising and implementing fiscal strategies to improve education, health, welfare, security, and infrastructure. These are the areas of national life we should examine to see if there’s anything to celebrate. So let’s take a closer look at national policy achievements.

So give thanks and praises

We are still alive.

Though we walk through the valley

of the shadow of death

In 1987, Jamaica recorded 442 murders. From January 1 to July 25, 2022, 819 murders have been recorded. But we live in such savage times that like COVID-positives, nobody knows how many murders were actually committed or how many more decomposing bodies are lying undiscovered in remote graves.

I cannot fathom the type of societal dysfunction that would result in the recent Clarendon carnage. I just cannot. Mealy-mouthed platitudes by political leaders can’t and don’t absolve them from blame for encouraging society, over 60 years, to descend into this sort of social abyss.

Twitterati has been propounding the view that rottenness in leadership starts with rottenness in followership as we all come from the same society and the same homes. One of my favourite politicians, Venesha Phillips, tweeted “Corrupt politicians cannot lead or mar a clean society. Such a society would never allow it. So I put it to you that it’s an already corrupt society that gave birth to corrupt politicians.”

I grew up in Jamaica in the 1950s-’60s. I can testify that excellent values and attitudes were taught in 95 per cent of homes across the island. Society wasn’t corrupt. But political greed bred politically connected gangs in the late 1960s-early 1970s. Each party tried to outdo the other in creating political garrisons run by “dons”. Values and attitudes began depreciating then. Soon, if you stepped on a man’s toe at a dance, a fistfight started. Now, road rage is settled by gunfire, and family who looks at you sideways is slaughtered.

Political leaders who were associated with gunmen turned a blind eye as the dons guaranteed electoral victories in garrisons, thereby bringing their political bosses’ snouts closer to what Wilmot Perkins called the “trough”. Now that a thriving guns-drugs trade granted these hoodlums political and economic independence, politicians, who hugged up these dog-hearted mass murderers, are suddenly concerned about gangs. Now they want to blame us for not committing suicide by informing to a potentially gang-connected policeman. Finally, they take refuge in blaming dysfunctional society.

Nah. I’ll part company with Ven on this one. It is power to dictate others’ affairs that corrupts. And absolute power corrupts absolutely. Ordinary citizens have no power. They can’t corrupt anything. The political majority (not including Venesha) became corrupted by the spoils of political conquest then they corrupted Jamaica. The followers simply followed the leaders.

Now, Jamaica’s security is treated with contempt. “Vote JLP and you’ll sleep with windows and doors open” must rank as one of the most desperate, reckless, destructive political promises of all time, ranked right up there with Wills Isaacs’ “May my eyes fall from my head and knock like bone dice if I don’t lower the cost of living” delivered at a 1950s Cross Roads political rally.

So Jamaica’s security is now another political football. There’s no more egregious example than the yes-no-maybe game played with unlawful (in my opinion) States of Emergency followed by the PNP president’s promise (at a high-profile funeral) to “support” Government’s crime-fighting policies.

But, despite political leaders’ nauseating manipulation of national security, Jamaica is still alive.

Welfare is non-existent. Instead, P.A.Y.E. workers are taxed beyond reasonable limits and given a pittance as “pension” (also taxed), while bandooloo Jamaica operates in plain sight without contributing a dollar to the national effort. Senior citizens who gave their productive years to Jamaica are cast aside. They must pay dearly for healthcare such as it is. They endure drama garnished with indignity (including extortionate bank fees) to collect and use the pittance. Worse, they become invisible as their acquired wisdom is ignored or ridiculed.

But despite taxation inequity and scant regard for senior citizens, Jamaica is still alive.

Healthcare infrastructure has been neglected for decades until it is indistinguishable from ramshackle. The Cornwall Regional affair is one of the most scandalous in 30 years (“youthful exuberance” and “run wid it” strong contenders) as the minister tried to pass it off as a few months minor refurbishing. Five years later … .

Doctors and nurses are undervalued, underpaid, overworked, and given facilities that would make David Copperfield despair. Then in another example of preferring insult over accountability; deflection over transparency, we’re told it’s our fault. We eat too much and exercise too little. Poor mi Israelites! We get up every morning slaving for bread (so that every mouth can be fed) but must eat expensive healthy foods and buy exercise bikes?

Despite public healthcare infrastructure in shambles, Jamaica is still alive.

Infrastructure? Road networks have improved, but the Government abdicated responsibility, contracting construction and toll concessions to a maze of foreign-owned companies (China and France featuring). What’s in this for Jamaicans? So we pay taxes to the Government and toll to China? Everywhere yu tu’n macca jook yu!

In 1990, the Government produced a five-year education plan on this premise:

“Given the acknowledged link between education, science, and technology and economic growth, [we must] develop a strategy which capitalises on this interaction.”

What have we done about this since? The square root of frack all, as usual.

In 2018, the education minister excitedly announced a 3.8 per cent increase (over 2017) in overall CSEC passes, yet only 68 per cent of entries passed.

A series of political samfie artists (many educated abroad) determined to discourage independent thought undereducated Jamaican citizens for 60 years. So the majority of us aren’t “independent” of anything and very dependent on scraps from political Bucky Massa’s trough. So we swallow and regurgitate our party’s daily propaganda dose and troll and abuse those spouting the other party’s line. For 60 years, education has been a political football just like security, healthcare, and welfare.

So by all means let’s celebrate! Let’s enjoy float parades, festival dances, competitions, Grand Gala. Give thanks and praises. We do have something to celebrate. Jamaica is still alive. And while there’s life, there’s hope.