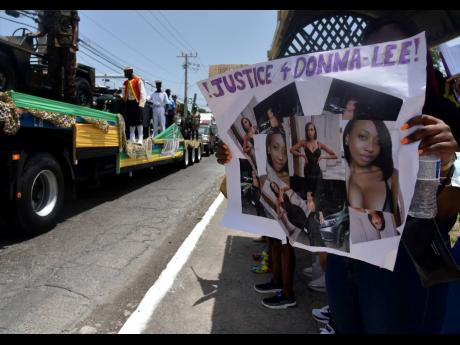 Based on the fact that significant and expert investigative work have been expended to tag constable Noel Maitland with a charge of murder, we must painfully conclude that a homicide was carried out. Mr Maitland’s lawyer says his client is...

Based on the fact that significant and expert investigative work have been expended to tag constable Noel Maitland with a charge of murder, we must painfully conclude that a homicide was carried out.

Mr Maitland’s lawyer says his client is innocent. That statement is less indicative of his innocence and more a pointer to what is simply an expression of the law at this early stage. But I can’t help but ask myself, if I murdered someone and employed an A- lister lawyer like the constable has, would I tell my lawyer the truth or would he make it a strict condition that I divulge all as it happened.

The late, great Norman Manley was in his time rated as the best legal mind/advocate in Jamaica.

He said that it was never a habit of his to ask a client if he was guilty or not. All he wanted to know was what happened.

Ms Donna-Lee Donaldson’s disappearance brought about a groundswell of support from various community sectors in this country. Even if some of the protesters were willing to speak of the mythical details of the young lady’s disappearance because they were the best detectives in Jamaica, I could live with that circus act. What was important to me was this pushback by the people.

We cannot pretend that the trust level between the people and the Jamaica Constabulary Force (JCF) is elevated at this time.

Social media had a field day of big mouths speaking amid little concern for unearthing the truth and in defaming others. To many, the truth was what converged with their suspicions.

The JCF must have received the message loud and clear that, on this matter where more than a few junior members of the force are patrolling the outer perimeter of these investigations, the people are smelling a rat.

As for me, I am willing to await the investigatory arms of the JCF to tighten up its coupling of advice from the DPP, so that the relatives of Donna-Lee can see some closure in this long, painful moment.

Create a distance of about three parishes from you, pull over and park beside a small two-stool bar at a place where you have never visited.

Speak to the 60-year-old farmer seated at the edge of the low step just by the sturdy wooden front door. Engage him in friendly banter then ask these questions.

Do you trust government and big business interests in Jamaica? No.

Are there many bad-mind people living here? Nuff nuff.

Are you happy? Definitely yes!

Years ago, I saw this as a flaw in the official research where there was this obvious disconnect between our happiness index and the societal factors that would normally lead to it.

But, in 2022, I have embraced that. As an example, if I live in August Town and you live in a lane off Red Hills Road you may be scared to drive and come check me. And, if I wanted to spend a few hours at your ends, that Red Hills Road tag could hardly be described as inviting.

But, as dangerous as the social spaces may become as the evening presses on into night, if we want to selectively occupy a few square feet of it, we will not become prisoners of this paradise teetering on the edge.

We are going to be happy even if we have no sound, lasting reasons to be so.

UPDATE TO OUR INDEPENDENCE

In Norman Manley’s speech at his retirement, he considered it ‘mission accomplished’ in terms of his generation’s leaving us politically independent.

When August 6, 1962 rolled around the hope and happiness index was off the walls. No study was needed to define that social pride that permeated the atmosphere. One could almost pluck it from the ether.

Before that, in the 1948 Olympics when McKinley and Wint triumphed, we must have known that there was something special about us. It was much bigger than the athletic talents of those men. It was a cocky defiance as this little spit of an island took on the powerful and the best. And bettered them.

In the days since the British flag faded into a troubled and troubling memory on August 6, 1962 and the Black, Green and Gold was hoisted to signal our path to economic independence and social viability, we have tripped up many times.

Our social viability is under threat. And it makes no sense. Our athletes have made cosmic-like strides to the extent that in Track the US athletic fraternity can only succeed in the few off years when we are grooming a new set of giant killers.

We want to wallow in the pride of celebrating our independence in such a way that, after this week wears off, we can be left with something stirring in our souls.

It is very obvious that there are not many countries across this globe that we can copy and use as a template to move forward especially in taking our number one problem. Violent crime.

In the old movies when opposing armies were fighting, they lined up on vast plains and fired their one-pop muskets while holding formation. In Jamaica, we are on that battlefield but the gangs and gangleaders are fighting guerilla-style warfare.

It is time for us to break formation, head into the woods and take them on when they least expect us.

For the sake of our independence, we must win this one.

- Mark Wignall is a political and public affairs analyst. Send feedback to columns@gleanerjm.com and mawigsr@gmail.com