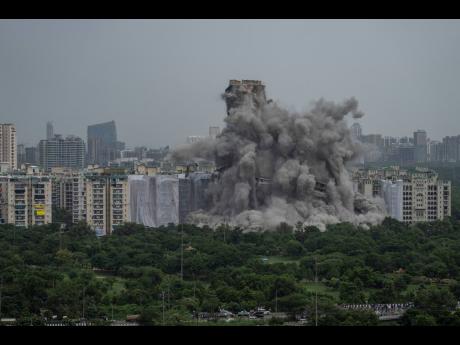 Meanwhile, in Noida, a satellite town near India’s capital New Delhi, at 2.30 p.m. local time on August 28, over 900 apartments of the nearly 100 metres-tall twin-towers Apex and Ceyane were demolished by implosion. This fulfilled the Supreme Court of India’s order following 12 years of litigation by citizens.

The Supreme Court of India ruling over Apex and Ceyane ensured that the home buyers of the twin towers who are covered by the judgment received refund of their outstanding dues, respecting a batch of contempt petitions filed by home buyers seeking a refund by order of the court. Compensation is being guided by the precedence outcome of a previous demolition in January 2020 of four apartment complexes in Maradu in the southern Indian state of Kerala. There, demolition complied with court orders that ruled that some structures there were illegal because they violated the Coastal Regulation Zone. The development comprised housing of a total of 343 units razed to the ground using the implosion method, leaving behind 35,000 cubic metres of debris and a cloud of dust especially, also following demolition of the minor structures inside the complex undertaken with excavators.

Compensation precedence include, firstly, to secure legal assurances from the authorities before any demolition to ensure safety of their own building property adjacent and/or near the demolition site. Second, to ensure that the central/state government does everything to involve the municipality during the process. The citizens found that without this integrated governmental approach, they were facing a compensation problem of their adjacent properties that were damaged and/or negatively affected during the demolition process. Citizens found that the municipality was ready to pay the compensation to affected residents, however, they were awaiting the central/state government’s approval for this.

The New Indian Express newspaper in a series of articles all dated August 28 reported the property consultant of the Apex and Ceyane towers as saying, “… we constructed these towers as per the building plan approved by the Noida Development Authority…”. This statement, and the timeline scenario surrounding the Apex and Ceyane towers, ring as a familiar refrain of the current Jamaica residential development landscape.

The Authority informed the court in February 2022 that demolition would take place in May, however, the court extended the demolition deadline to August 28. The final evacuation clearance came around 12.30 p.m,. and the demolition took place at 2.30 p.m. inside a demolition exclusion zone of roughly 500 metres from the twin towers that Sunday. Both the Apex (32 storeys) and Ceyane (29 storeys) under construction were imploded in 12 seconds in what was described as a carefully choreographed and meticulously executed demolition. The New Indian Express headline said: “… India has joined 100-metre building demolition club: Foreign brain behind Noida twin tower success …”. Several window panes in Emerald Court, as well as ATS Village, were cracked, and the Authority had started the process to replace them with new ones shortly after inspection at the site Sunday evening.

In Indi,a the homebuyers’ body termed the demolition of the twin towers a huge victory for flat owners and that it also demolished the ego of builders and development authorities. The Forum for People’s Collective Efforts, an umbrella body of homebuyers that played an important role in enactment and implementation of real estate law, added that the responsibility of development authorities should have been fixed in this case. The national Realtors’ Apex body commented that most of the organised developers are adhering to all guidelines laid down by the authorities, and the demolition of the Apex and Ceyane towers will act as a good reminder for those who do not set a good precedent for the housing sector, serving as a deterrent for developers to violate building norms and laws, adding that the decision was symbolic of the new India, in which it is all about best practices, governance, and following the law.

What development parallels may be drawn or lessons learnt from India for Jamaica? Both countries got independence from Britain – India on August 15, 1947, and Jamaica on August 6, 1962.