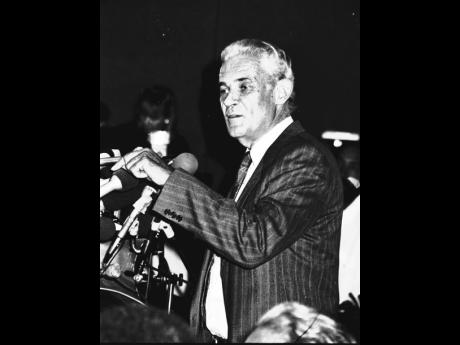 Like father, like son, Michael Manley concentrated on Jamaica’s reconstruction. In the beginning he sought reconstruction through ideology. At the end he recognised reconstruction could only be sustained through constitutional reform. 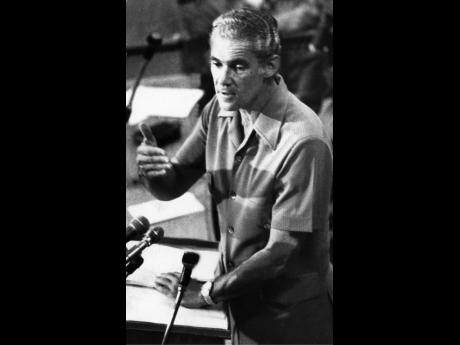 Gleaner Photo
Even though Michael Manley recognised the “weakness” of the MP/Minister conflation, he still clung to the colonial vestige of belief that all executive power should be elected.
1
2

Y’all knew it was just a matter of time before I returned to the urgent need for constitutional reform.

This time I’ll try to be as quiet as possible while presenting views on the subject of two former prime ministers expressed in writing almost 30 years ago.

I begin today with a memorandum from Michael Manley dated May 25, 1994 to David Coore, then chairman of a parliamentary committee examining recommendations in two reports of a Constitutional Commission originally chaired by James Kerr then Lloyd Barnett.

“I have believed for some time that Jamaica’s ‘first past the post’ electoral system contains many weaknesses. For example, the system has produced a series of parliaments in which the winning party is heavily over represented and the losing party under represented…

“…a lop-sided Parliament creates a situation in which the government can easily succumb to an over confidence, even an arrogance, born of the visible but misleading evidence of its huge majority. At the same time, the Opposition can be reduced to the point where it becomes difficult to service its responsibilities, such as constructive contributions to the workings of the various committees.

“In the end, a top heavy Parliament is a poor instrument for achieving the best results of which democracy and parliamentary system are capable.”

Joshua has NOT been resurrected. He wrote this almost 30 years ago. He also addressed another of my pet peeves – Separation of Powers:

“There is a second weakness in the…‘first past the post’ method. The system pre-supposes it is a good thing to require [MPs] to undertake simultaneously the responsibilities of ministerial office while discharging those of a constituency representative. Ministerial appointments through the Senate are regarded as a deviation from the norm and, therefore, [subjected] to numerical limits. However, the truth is the limit upon senatorial appointments to ministerial office is a necessary constraint for a reason that has nothing to do with workloads and performance. The limit exists because the Senate is an appointed body and thus not directly the product of the electoral process.”

This establishes how difficult it was even for great thinkers who grew up under British rule to get a grip on the need to dismantle every vestige of colonialism in order to emancipate our people from mental slavery. Even though Michael recognized the “weakness” of the MP/Minister conflation, he still clung to the colonial vestige of belief that all executive power should be elected.

But, obviously, Michael had been wrestling with this separation of powers conundrum for a while:

“From as far back as 1979, I wrote a memorandum for PNP’s executive setting out the case which I argue here. The problems which I discuss here were evident from that time. I felt, and still feel, that we could solve many of those problems if we were to put in place a system which incorporated both ‘first past the post’ principle and an element of proportional representation.”

“It would be possible to maintain the existing or a similar number of constituencies which would be contested by any party. [Simultaneously] there would be a number of seats allocated in parliament strictly on a basis of proportional representation based on overall national electoral percentages. Each party would enter a slate of persons in addition to those who contested the constituencies. It would be provided that the number of candidates on each slate who entered parliament would reflect actual percentages secured in the total national vote.

Ministerial appointments would be strictly limited to either persons who succeeded in constituencies or from the proportion of the [successful] slate.”

This isn’t EXACTLY my view but food for thought and proof of the need for widespread consultation led by a Commission of independent thinkers.

Furthermore, it would become possible for the winning party to appoint its Prime Minister, Minister of Finance or all its Cabinet from the proportionally chosen national slate.”

By now you know I prefer my PM to be directly elected. But, back to Joshua:

“…The key point is that it would create flexibility in relation to the problem of functional pressure. It would also create transparency because each party would have to declare…all the people it contemplated appointing to ministerial office should it be successful in an election.

“Finally, should a third party enjoy substantial [nationwide] support but prove unable to win a particular constituency, it would be able to gain [Parliamentary] representation. A minimum percentage requirement could be set to limit access to parties with serious support.”

Sounds like my idea of how to constitute a Senate. So, even in his twilight years, Michael Manley’s focus was how he could help improve Jamaica’s governance.

He addressed the Senate directly:

“The Senate or Upper Chamber could then be either abolished or turned into a pure chamber of review without being itself a source of ministerial appointment and, by extension, of binding commitment to Cabinet decisions...

…Chambers of review can be conceived in different ways and can serve important functions. However, they always represent a secondary consideration. The heart of parliamentary democracy is to be found in a lower house elected by and accountable to the people.”

Karekk! That’s why a lower house that oversees itself as Government and is also tasked to represent constituents whose interests often diverge from Government’s (ask St Thomas taxi drivers) is a non starter.

CONSTRUCT OF THE SENATE

Joshua’s views on the Senate’s construct differed from mine:

“In this context, I don’t favour [elected] upper houses. Any chamber that is elected directly must have real power to justify its existence. This creates the problem of a divided focus of authority which can only be justified in extreme circumstances which frankly do not exist in Jamaica.

“At the same time, I don’t support systems that are based purely on proportional representation because they tend to create Parliaments comprised of large numbers of small political parties each representative either of special interests or narrow points of view. Experience shows it can become very difficult to develop clear and strong policies in a situation that can only function on the basis of unending compromises.”

So he wants a mixed bag. Let’s throw this into the pot today and see if we can finally get the show on the road. Michael concluded:

“In the meantime, I support the retention of a basic element of the present constituency system. [MPs] who represent specific areas can and mostly do make a vital contribution representing the special needs of the people in those areas.

“Some form of system reflecting a mixture of the ‘first past the post’ principle and proportional representation seems to me to hold out the best prospect of answering many of the present difficulties while ensuring all members of Parliament and Cabinet are subject to democratic choice and democratic accountability in a system which is essentially transparent.”

Personally, I think we achieve the same end with less conflation of duties by ensuring that no Cabinet member can be appointed without strict public vetting by the people’s representatives in Parliament.

This subject detained his father in his last days and was the gravamen of his farewell speech to PNP Conference 1968. Like father like son, Michael concentrated on Jamaica’s reconstruction. In the beginning he sought reconstruction through ideology. At the end he recognized reconstruction could only be sustained through Constitutional reform.

Does PNP even know about this document? Does it plan to make Constitutional reform a major plank of its political platform? Or will it continue to major in the minor; support the same-old-same-old; call for ministerial resignations ad nauseam; and make wild, divisive personal attacks in pursuit of “power”?

When PNP gains that power, then what?

For 50 years, both parties studiously ignored Jamaica’s critical need to reconstruct colonial governance systems. If both don’t shift focus and address that need, they’ll find themselves forever playing finger-painting games, the winner of which becomes a Minority Leader in a world of propaganda peddlers. Government ends up leading less than 40 per cent of Jamaica while chaos and anarchy rules no matter who occupies Jamaica House.

Next week, we’ll look at Constitutional Reform writings by another past PM from 27 years ago.

 Gordon Robinson is an attorney-at-law. Email feedback to columns@gleanerjm.com