Mark Wignall | Can the JLP make us hate less? 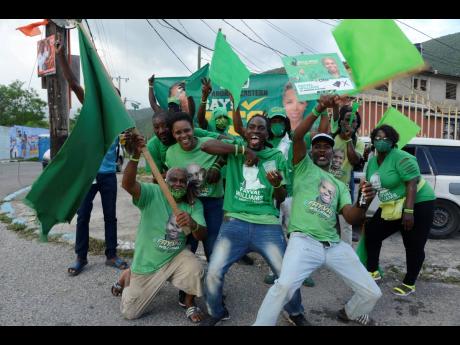 About six months after the election win it is not only safe to throw off the hangover of the victory but reality must give way to political promises foolishly made. A return to power for the Jamaica Labour Party (JLP) in September 2020 would have...

About six months after the election win it is not only safe to throw off the hangover of the victory but reality must give way to political promises foolishly made.

A return to power for the Jamaica Labour Party (JLP) in September 2020 would have landed that party in troubled waters. Among a decreasing voting population an increased percentage of JLP voters swamped the voting booths and gave the JLP and Andrew Holness an investment of faith bigger that the faith the JLP had of itself.

What that meant is that in the minds of those voters they were prepared to park the opposition People’s National Party (PNP) in the political graveyard while giving the JLP administration significant time to try, to make errors, to tweak and to wheel and come again. Both parties always knew that there would come a time when the relationship would get stale and the love would walk the corridors in worry instead of finding comfort in the seating arrangements in the plush living room.

I suspect that the majority of voters are not quite ready to give up on the JLP even though it seems to be constantly on the back foot in tackling violent crime.

In the mid to late 1990s, two political garrison communities with strong loyalties to the JLP fell out of love with each other. To the north was Rema and Denham Town was to the south. The info I had at the time was that PNP infiltrators were taking advantage of two troubling situations. The first involved Eddie Seaga, the stubborn JLP leader. The second was the dangerously poor treatment that street forces in Denham Town and Tivoli Gardens had been meting out to the ‘tiki tiki dem’ in Rema.

In that period of the 1990s some houses in Denham Town were firebombed by Rema desperadoes. According to Seaga when I spoke with him the police were more eager to assist Denham Town residents to move out instead of offering them protection while staying.

What amazed me was that many of the warring factions, male and female, were relatives. Raw, dutty garrison politics were consuming them.

At one stage of the political tribulations I travelled down to the tension-filled border of Rema/Denham Town.

I exited the car, walked up to Seaga and shook his hand as I would do to any political leader.

We spoke for about three minutes and then I walked over to the border to Rema in an effort to converse with some of the residents.

As I approached the border a rough-looking dread stared me in the eyes and said, ‘Mi si yu shake di wicked man hand. Nuh come ova yah so!’

JLP IS IN SAFE POLITICAL TERRITORY

The hate that exists in Jamaica now is not the political type that existed from about mid-1970s to early 1980s. Even when I saw cousins in Denham Town hating and shooting at cousins in Rema there was a real sense in those troubled areas that enough was enough. The politicians could not fix it, had no interest in fixing it and the people told them to p… off.

But the hate has gone viral and it is standard practice for gunmen to raid areas, shoot it up and do so just to send a message to the target that when they come back for him next week even the pigeon in the coop will be targeted.

It is not normal in Jamaica for our politicians to speak about our people seeing love as a main objective in their lives and in their households and communities.

Our community leaders would much prefer to play up their foolish games as ethical and morality police instead of leading our youngsters into seeing a better side of themselves.

So when a few schoolboys show up in what I would judge as normal fashionable trousers they are turned away from school because the pants are considered to be too tight.

It sounds highly clichéd but we spend too much time majoring in the minors.

One side of the political directorate gave us his view as to how he saw one part of Jamaica finding back its better self.

West St Mary MP Bobby Montague suggested that Jamaica should re-entertain hanging as a solution to our terrible homicide rate. Or what is seen as our murder rate.

Hang them until they are dead, dead, suggested the popular member of parliament.

Who would be in charge of pulling away the metal contraption that would crack that neck and choke out that life?

My friend Bobby is coming close to ridding his menu of items of love as a solution. The real crazy part is that I understand him and his frustrations because I also have my time of coming close to thinking barbaric thoughts and not necessarily because I am void of love.

WHAT THEY SAY AT STREET LEVEL

Government is frustrating. Try to get anything done and one is driven close to murderous thoughts.

The police are corrupt and many of them are members of the JCF more for the hustle than for the job.

It may be irony but until the next set of poll findings which are likely to show the JLP riding ahead of the PNP, the JLP and Andrew Holness ought to know that the love that they cannot convey to this nation is being given back in equal measure.

Many are also saying that the JLP administration is setting up their money friends, their powerful friends to run over the people, to steamroll them.

But many people are also perceiving the opposition PNP as just waiting on the time when that party can walk inside the same hall where the awesome and powerful private sector interests reside.

Then it will be different names but similar arrangements.