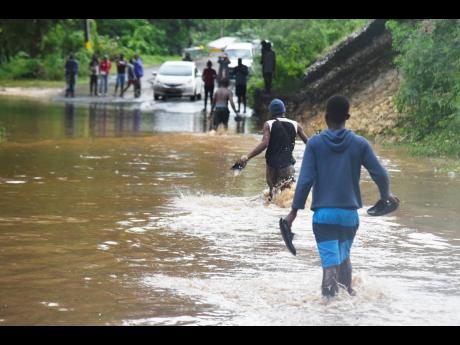 Nicholas Nunes
Two men wade through a flooded section of Rasta Corner in Free Town, Clarendon after the passage of Tropical Strom Ian on Monday, September 26.

A few days before Tropical Storm Ian entered Jamaican territory, just about every foreign met office reporter was showing the system steering south of us. To add luck to it, it was also heading sufficiently east to remove the mental unease from our people.

This time around the voices of those reaching out to a divine power were peculiarly quiet. For years, they have prayed for hurricanes to turn away magically from the area where those praying the loudest reside and head towards those with lower-volume entreaties.

The PM has told us that the water damage to our public infrastructure is $360 million. The total cost to Jamaica would have to include the damage done to households and housing units. At this time it would be problematic to estimate that damage. In the end, we have seen the damage that Ian did to Cuba and many sections of Florida. With us it was a near-perfect arrangement of steering currents, sea-surface temperatures, ocean depth, and forward movement, etc.

At this time, too many of our people are reckless with hurricane preparation. Or could it be that many of them did not have the physical resources to be any better prepared than they are? I say this because of a conversation I had with a 50-year-old shop owner in a Kingston 19 community.

“If a man can only afford what him would normally set aside for his woman an dem pickney when weekend come, what is the use a him being prepared?Him have a hammer whey can nail dung tighter two or tree nail. But why nuff a wi sey nuh storm nah come is because man don’t want to admit dat him can’t do much more dan normal.”

Our state of mind after the luck with Ian is firstly, recognise that until the end of November rolls around, we are still prone to hurricanes. So be prepared. Or something.

Jamaica has no large spreads of coca plants, which means that we cannot produce any cocaine. The seizure of a significant stash at the Ian Fleming Airport tells me, basically, three things. Tips were provided, which led to this seizure. The tips could have been strategic and designed to allow other stashes passing over Jamaica from consignor to ultimate consignee to go undetected.

Or foreign government agents and crooks were working in a semi-sting, but something went off the rails and certain targets were missed. The 1,000 lbs of cocaine,valued at US$25 million and reports of international intelligence agencies involved in the seizure.

A significant number of Jamaicans funded their way to generational wealth by way of the trade in ganja in the 1970s. After the Jamaica Labour Party (JLP) won the elections in October 1980, Jamaica, in the early 1980s was paraded by the conservative administration of Ronald Reagan as a trophy won by the anti-communist, pro -Western faction in the Cold War. Jamaica was Reagan’s poodle.

When Reagan’s hard-line anti-drug stance was declared, ganja was made the fall guy. The Americans provided helicopters with weed-killing sprayers to kill off the ganja fields they could locate. Weed killers were used on crops from Ewarton to Claremont and right across the slanting plains across the rib of the islands.

The price of local weed spiked, California weed farmers got in on the act, and it awakened the trade in cocaine from cartels in Colombia to Miami and New York by way of Jamaica and The Bahamas.

A Jamaican weed farmer told me of an incident that took place in Ewarton in the mid-1980s. “Mi go inna di bush go tek a s… . A helicopter land, and two white man in soldier uniform come and go inna mi nursery. Den dem go back inna di helicopter and a ting with a long fire buss out a di copter and it bun up mi weed.”

It may be pure coincidence that the power of the posse grew in the time of the Seaga-Reagan economic and security arrangements. In the previous decade, under the People’s National Party (PNP) government, the power of the ganja dollar kept the economy alive even as the formal economy was falling apart. There was some amount of commitment in how the politicians and the street forces attached to them operated in the ‘70s.

In the latter part of the 1980s, when Seaga was on the way out because the economic experiment with Reagan had sputtered and died, the street forces loyal to both the JLP and the PNP began their own experiment in working the illegality of the cocaine trade. They found reason to work together.

By the 1990s, the transhipment of coke through Jamaica made certain members of the JLP- and PN- connected gangs immensely powerful. These men literally lit their ganja spliffs with US$100 bills!

It may be fanciful and wishful thinking to believe that the stash at Ian Flemming Airport has no big business or political connection. But just as how the proliferation of guns followed the power that ganja gave to the druggist of the ‘70s and the greater cash haul from cocaine trading, the big commonality is the parallel trade in guns and violence in the society.

Senator Bernie Sanders said recently, “A society cannot sustain itself when so few have so much while so many have so little.” He was commenting on troubling data that stated that one per cent of the American population owned one third of the nation’s wealth.

Are we that far off in our inequities?