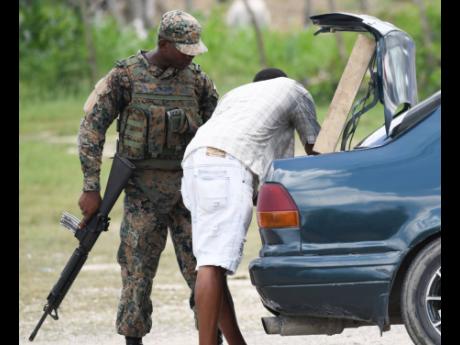 File
In this 2021 photo, a JDF personnel conducts a search of a vehicle at a checkpoint in Whitehouse, Westmoreland.

Another World Cup-magnitude political football game has started, with crime fighting as the ball, States of Public Emergency (SOEs) as one team’s main striker, and Nobby Stiles (remember him?) as the other’s bulldog defender.

Round and round the Mulberry Bush

the monkey chased the weasel.

The monkey thought it was all in fun.

I find it tiresome to listen to both teams of farcical fanatics disguised as parliamentarians pretend to be defenders of the Constitution. The prime minister insists the Constitution provides support for the on-again-off-again SOEs as “one tool in the toolkit” for fighting crime. The opposition leader, looking about as enthusiastic as a wet blanket, loftily reminded MPs of their oath to uphold the Constitution and declared SOEs, when used only as crime-fighting tools, as unconstitutional.

I agree with the opposition leader. The state of emergency provisions are clearly drafted to protect the State against active enemies (whether foreign or domestic) who create a clear and imminent danger to the nation. They do not, in my opinion, provide a crime-fighting tool. But that’s just my opinion. What I find pathetic is that the Opposition has been bellyaching about this aspect of the abuse of SOEs for years but has never sought to litigate the issue as it did with NIDS.

For the umpteenth time, Mark Golding told MPs, from a lofty perch of superior certainty, that the PNP had an opinion from eminent counsel on this since 2017. So why not sue? Why not clear this up once and for all?

I haven’t read that opinion (which Golding keeps as close to his chest as if he were CEO of a private company in a legal dispute with another private entity). But I’ll bet dollars to doughnuts that the reason the PNP uses such a supercilious tone without actually acting on the issue is the PNP was probably advised that any legal challenge would be iffy at best because SOE provisions are drafted to kick in once the governor general (GG) “is satisfied” one or more of the constitutional pre-conditions are present. You and I may disagree with the GG as much as we like but a court is unlikely to overturn his SOE declaration unless a Claimant can prove there was NOTHING in real life or in the advice he received upon which GG could’ve hung his hat and declared “I am satisfied”.

So, instead of taking these SOEs to court years ago, PNP prefers to moan, whimper and complain like a dog that lost his bone. To what end?

The situation isn’t advanced by Government’s insistence on comparing the crime surge to an epidemic (a.k.a “public health crisis”). That’s as bad as an analogy can get. PM reminded us that, during epidemics, we quarantine those infected so we should also quarantine those “infected with violence” (to thunderous applause from the majority benches).

Good grief! Really? Seriously? Infected disease carriers are isolated and close contacts quarantined AFTER they test positive for the disease. By and large, the quarantine (for close contacts) or isolation (for those testing positive) is at home. The positive test for violence infection is administered in a court of law and quarantine/isolation begins AFTER a positive test (i.e. conviction) is returned. Is PM suggesting we should sweep up all suspected COVID-19 cases and detain them indefinitely in a concentration camp?

The “public health crisis” is a ghastly metaphor but there’s a historical simile that appropriately describes Jamaica’s political response to its high murder rate. During the scourge of the Bubonic Plague, the Roman Catholic Church attacked the virus with prayer and rosaries. Of course we can always trust 17th Century English folklore to come up with a nursery rhyme often interpreted as comment on the church’s pandemic mismanagement:

A pocket full of posies,

We all fall down.

But author James Fitzgerald has been quoted as acknowledging he was satirizing mismanagement of the the Plague without specifically targeting the Church:

“Ring-a-Ring-a-Roses is all about the Great Plague; the apparent whimsy being a foil for one of London’s most atavistic dreads…. The fatalism of the rhyme is brutal: the roses are a euphemism for deadly rashes, the posies a supposed preventative measure; the a-tishoos pertain to sneezing symptoms, and the implication of everyone falling down is, well, death.”

But Government wasn’t satisfied with playing the “epidemic” card. It continued its merciless manipulation of frightened citizens with the irrational concept that SOEs “save lives”.

If (using approximate numbers) 28 persons were murdered the week before a SOE was declared and 12 the week after, it is fuzzy mathematics and ridiculous reasoning to assert that 16 lives were saved. What actually happened is that 12 more lives were lost despite the declaration of a SOE. Until you can get inside the heads of murderers and find out how many they planned to kill that week or prove that a murder was imminent but a SOE somehow stood between the gunman and his victim, this extreme exploitation of murder statistics is fear-based, Machiavellian and unworthy.

A violent incident in Central Kingston last Monday highlights the real danger of routinely using soldiers in crime fighting operations. This isn’t a judgment on the facts of that case but it’s also a fact that soldiers are trained to kill first and ask questions later. I’m unconvinced that any pre-SOE training in respect for human rights can be effective in so swiftly reversing their basic training. If we continue on this slippery slope of relying on an army as police, we are playing Russian roulette with citizens’ right to life.

The Prime Minister grandiosely claimed citizens’ lives are in MPs hands. Hopefully that’s only exaggerated puff because I’d rather my life wasn’t subject to the same inept, often feckless mindset that controls CDF; self-monitors Government; exempts itself from tax or pandemic laws; and recklessly spends tax payers’ dollars. Lord, deliver me from THAT!

I understand Government is in a quandary. It wants immediate results. Elections are looming. But, just once, a leader who says legacy not popularity is his priority could consider implementing long term reform of the JCF. This can leave a lasting legacy and make future JDF interventions unnecessary. It begins with de-corrupting the police force by any means necessary.

Yes, there are many decent, efficient, hard-working policemen and women BUT their effectiveness is nullified by corrupt colleagues who are members of or consultants to organized crime. For pity’s sake, even Kevin Smith’s craven cult contained police officers as members. Until we at least begin the de-corruption process, all the talk about “improved intelligence” and “technology” will be just that – talk – as organised crime, with the help of corrupt JCF members, stay several steps ahead of law enforcement.

So the legality of SOEs remains unclear because PNP is too afraid of losing their big talking point to take them to court. But the political imperatives are as plain as Sarah. Until a court declares these SOEs unconstitutional, Government must be allowed to govern as it sees fit except it can be shown to be acting in bad faith. The litany of reasons set out by the Prime Minister in Parliament on Tuesday and his disclosure of the Government’s integrated crime fighting strategy (love it or hate it) makes it abundantly clear Government is acting, no matter the varied opinions on constitutionality, in good faith. In those circumstances, the role of the Opposition is to warn Government of the perceived error of its ways but to have one Opposition Senator (preferably one whose personal conscience is already with the Government) to support Government’s extension of the current SOEs.

If PNP continues baseless bluster based on untested “unconstitutionality” while blocking Government from pursuing its expressed crime fighting policy, PNP will be exposed as playing a political game with citizens’ security and pay a huge political price.

But, isn’t it all a game to them anyway? In the end, the saddest part of this cruel competition for votes currently being contested using Jamaicans’ safety as political strategy was on show in Parliament on Tuesday. The Prime Minister, during his impassioned castigation of the Opposition for not finding what he called “common ground” (which, in reality, meant residing on his ground) bellowed “I win; you lose!”

See? It’s just a game. So we come full circle and end where we began:

Round and round the Mulberry Bush

the JLP chased the PNP.

The JLP thought it was all in fun.