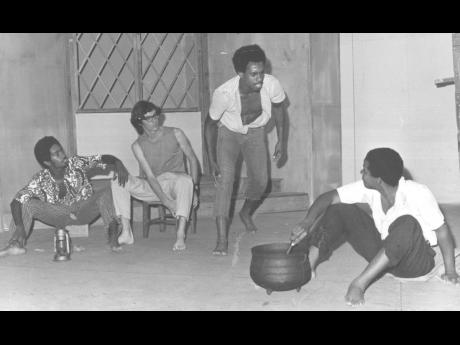 Gleaner Archives
In this 1975 photo, (from left) are actors Paul Dietrich, Brian McKillop and Brian Kimble - the three suitors- and Howard Clayton who played Anansi in ‘Breakfast with a Witch”, by Dennis Scott at the opening of Montego Bay Little Theatre Movement at Fairfield.

In the first of this two-part article, we focused on why the Edna Manley College of the Visual and Performing Arts (EMCVPA) decided to honour Dennis Scott as part of their 45h anniversary. Part I described Company Song, staged by second- and final...

In the first of this two-part article, we focused on why the Edna Manley College of the Visual and Performing Arts (EMCVPA) decided to honour Dennis Scott as part of their 45h anniversary. Part I described Company Song, staged by second- and final-year students at the School of Drama under the skilful direction of Eugene Williams. In that first part, Marvin George, dean, School of Drama at the EMCVPA, also spotlighted Dennis Scott’s contribution to the creation of a Caribbean cultural aesthetic.

In this second part, Eugene Williams, former student of Dennis Scott, examines his legacy and the challenges currently confronting cultural creatives, which are barriers to the sustainable future of the performing arts sector. Williams has had a panoramic engagement with all dimensions of dramatic production at both school and professional levels. Peeking through his well-worn lenses of experience, it was easy to see why he was pessimistic about the future of the serious version of Jamaican theatre. He was sharply critical of the ways in which Jamaica has squandered Dennis Scott’s legacy. He saw this neglect as directly tied to the lack of investment in the orange economy.

“I am not optimistic because for Company Song. We had to work with zero budget,” he said. “Things are getting worse. Ten years ago, at least you would have had some funds to work with. Since COVID, theatre has had a raw deal. Educational theatre, the serious material that students need to train on, has fallen through the cracks. Nowadays, producers are left on their own. Sports and arts are getting some help but not theatre. It is challenging for students to contemplate a career in this area.”

Williams pointed out that what made people like Dennis Scott special was that “they contributed much to Jamaican Theatre. They were not only playwrights. They were also directors. They created dramaturgy. In other words, they put things together, cut and paste, to create. People like Lloyd Record, Dennis Scott, Bobby Ghisays. And the work of people in our commercial theatre like Patrick Brown, Basil Dawkins, and Louis Marriot are worthy of being taken seriously and ought to be archived. But the influence of their work is ephemeral”.

In the process of reconstructing Dennis Scott’s work for the honouring initiative, Williams was struck by what he described as the lack of current indigenous content, which puts students at a distinct disadvantage vis-à-vis their foreign counterparts.

“If an American youngster goes to an American university to study theatre, the majority of the work they will study will be work coming out of their own experience,” he observed. “In Jamaica, we don’t have the material. And then there is the issue of gender. As you know, most of the people pursuing tertiary education are female. But in theatre, most of the characters in the plays are male.”

The seasoned director pointed out that this gender anomaly created a double problem for the development of the theatre sector.

“The students’ language is not honoured; they don’t have local plays, in their language. And then there is that question of gender.” On this question, Williams recommended that more women should be encouraged to play leading roles rather than just leaving this pattern of inequity to choice and circumstance. As he observed in this regard, “That definitely reflects an inadequacy in the archiving of the works of our people who have contributed to theatre in the Caribbean, particularly as writers.”

Williams elaborated that he was moved to tears by the quality of the work and commitment of the students, most of whom were so enthusiastic that even when they did not have to be there, were present at rehearsals. This reflects a tradition of volume of participation and production that he thinks is unique in the Caribbean and the world. This enthusiasm should be supported with material resources, as he emphasised.

“Performing national identity is an attempt to tackle the problems of cultural development,” Williams said. “Various people have contributed to that movement. People like Marcus Garvey, Rastafari, those preserving the traditional cultural forms – the Jamaica Cultural Development Commission, (JCDC), have been crucial in this. These have to be seen as more than just cultural industries. Rhat kind of vision is incomplete.”

Williams is most concerned about the disconnect he perceives between state policy and the training laboratory that the students occupy. He recommended that the relationship be viewed as a continuum of opportunities for development rather than a hierarchy. As he elaborated,

“August Wilson did not begin on Broadway. Like our students, he started his growth with experimentation. Dennis Scott did drama-in-rducation and English. He understood how students grow and learn, and he made accommodations for them. Unfortunately, if more Dennis Scotts are out there, the conditions are not conducive to the rise of such individuals. There are no opportunities due to the lack of funding.”

Williams’ advice to Olivia ‘Babsy’ Grange, minister of culture, gender, entertainment and sport is that instead of seeing the incomplete picture of the creative industries as the result of the efforts of the ministry – or lack thereof - more investment should be poured into training spaces like the EMCVPA. As he suggested further, this targeted investment in youth-talent development will safeguard the legacy of Dennis Scott and redound to the posterity of the support of the genius of upcoming actors. He noted that it was ironic that Dennis Scott was a minimalist in his approach to theatre aesthetics, using as few words as possible to get his message across but generous to a fault in the empathy he offered to students. Williams sealed his tribute by declaring that Scott’s greatest offering was that he was “passionate about the investment of resources in the production of talent.