Two in One Celebration at Tamarind 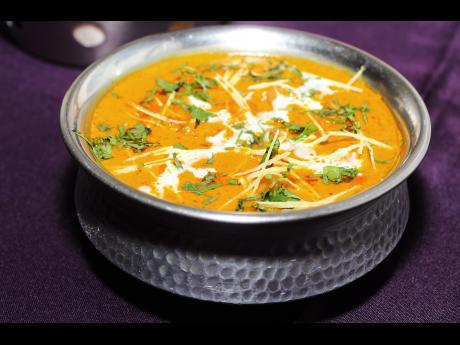 Brian McCalla/Freelance Photographer A closer look at fish goan curry, straight out of India to Jamaica.

Tamarind Indian Cuisine has been making remarkable strides in making mouth-watering Indian food pleasing to the Jamaican palate. They have added a culinary twist by fusing it with other Asian cuisines, making their menu a fusion of flavours.

Tucked away upstairs in the corner of Orchid Plaza, owner Vivek Chatani explained that he has returned to Restaurant Week year after year because of the great feedback he always receives, ?We have widened our customer base and many have come back, so we return to the Restaurant Week family.?

He took us down memory lane on how he got his start in the food industry, ?I like food a lot, and there was a void in good Indian food in Jamaica at the time, so I decided to fill that gap. I saw Asian food blending well with Indian, and decided to fuse them.?

The start of this year?s Restaurant Week marks the five-year anniversary of their restaurant, and what better way to celebrate than by treating returning and new customers to savoury Indian-Asian infused delight?

Quaint and cosy, the restaurant is adorned with artistic decor, paying homage to his homeland ? India. ?Even though my team is certified, the technique they use in preparing the dishes were not taught in cooking school: It was instead a culinary custom passed down to them from generation to generation.?

The team arranged fish goan prepared with Indian curry, served with soft and slightly crispy naan, prepared in a traditional tandoor. We were also offered a taste of Asia with chicken chang mai noodles, the chicken chang mai meal, made with Thai paste and slight Asian curry, as well as coconut milk in a mouth-watering pasta fused with spices that dance with your taste buds. So celebrate with Tamarind Indian Cuisine in Orchid plaza, as they take you on cultural culinary journey and let your appetite attest to the authentically rich bursts of flavours.