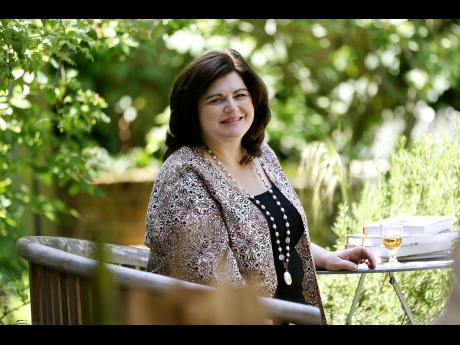 Kirsty Wigglesworth
Food writer and chef Diana Henry poses for a photograph at her home in London. With nine cook books and a slew of other honours to her name, many consider her to be in the vanguard, leading a renaissance in British food writing. 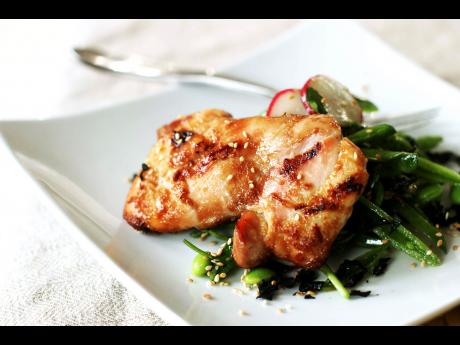 Matthew Mead
Japanese grilled chicken thighs with edamame. The dish is one of the recipes from Diana Henry's new cookbook, 'A Bird in the Hand'. 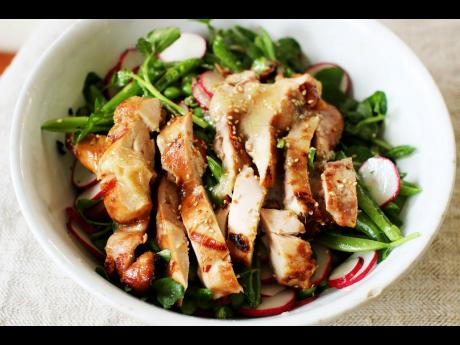 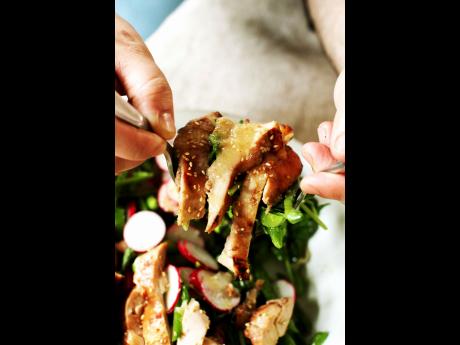 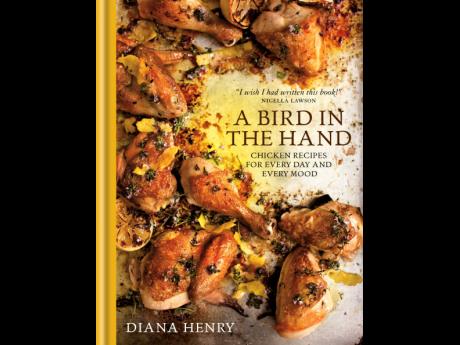 Laura Edwards
This image provided by Octopus Publishing Group shows the cover of A Bird in the Hand, by Diana Henry. Henry reached back to her roots for the new cookbook, which is focused on chicken. 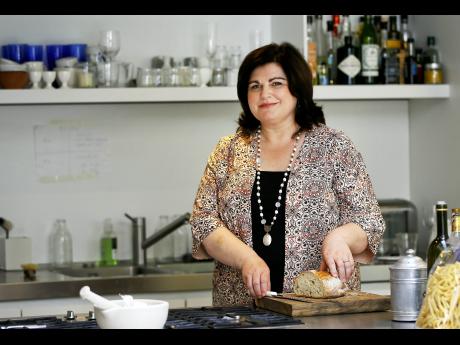 Kirsty Wigglesworth
Food writer and chef Diana Henry in her kitchen at her home in London.
1
2
3
4
5
6

Diana Henry had a degree from Oxford, a great job at the BBC and the promise of a golden future.

But when she turned 30, curiosity got the best of her. She took leave to attend a course at Leiths School of Food and Wine and remembers standing proudly at a London bus stop in her chef's whites.

"I didn't want to take them off," Henry said recently in her open-plan kitchen, the sun touching her glowing cheeks as she recounted the memory. "Every day was a kind of joy."

Two days into the course, Henry left the security of the BBC and stepped into the unknown. Nine books and a slew of honours later, Henry still pauses in disbelief. Her shelves, floors and tables groan with hundreds of cookbooks from some of the biggest names in food, including Alice Waters, Claudia Roden and Ann Willan. Some critics suggest hers may soon stand in their company.

Henry considers her rise improbable. She grew up in Northern Ireland, where good cooks were mostly seen as being good bakers. The food was good, but not exactly exotic. An extended trip to France changed that, with her exchange partner schooling her in proper vinaigrette and pot-roasted rabbit. It gave her a sense that there was something beyond the British Isles. She felt connected.

"You can go anywhere with food without going very far at all," she said. "You can stay in London, you can stay in your kitchen, but you can be travelling anywhere."

With some cash from her granny, Henry bought Roden's A New Book of Middle Eastern Food and Waters' Chez Panisse Menu Cookbook. She was transported.

"It was like seeing a painting and saying, 'Oh. My. God!' Look at the way they look at the world," Henry said.

Henry has earned a reputation for producing beautiful cookbooks with recipes that work, said Andrea Weigl, chairwoman of the James Beard Foundation book awards committee. But the books also have personality, a sense that you hear Henry's voice from across the table as she tells you how the dish came to be. That personality helped win her a Beard nomination this year for her book, A Change of Appetite: Where Healthy Meets Delicious.

Henry says she found the book hard to write, not just because she had to do a lot of research on the science behind healthy eating, but because it dealt with issues that were very personal.

"It was quite brave in the Change of Appetite book because my weight has been an issue forever," she said. "It was hard to know where to draw the line."

She reached back to her roots for her new cookbook - which is focused on chicken - A Bird in the Hand. Her grandfather was a farmer, primarily of dairy and poultry, and she learned early how to pick the bones right down to the 'oysters' on the underside. And she wants everyone to appreciate the crispy-salty skin of a roast.

Despite that social gene, Henry, 50, refuses to raise her profile by appearing in front of a TV camera. For someone who started out producing television documentaries, she displays an almost pathological fear of cooking on camera. Still, the Beard nomination and a Cookbook of the Year award from the Guild of Food Writers have brought recognition, something Henry described as "the sort of thing you dream about but never think will ever happen because you're British".

"I wasn't ambitious, I sort of left that behind in telly," Henry said. "I just wanted to do the very best job I could, so I have always put my all into them. And I did want to write books that were worth leaving behind - that has always been important."

Start to finish: 30 minutes, plus marinating

2tsp pickled ginger, shredded, plus 21/2tbsp vinegar from the jar, or to taste

For the bean salad:

1/2 oz micro greens (such as little sprigs of watercress)

1. In a large bowl, combine the soy sauce, sake, sugar, ginger, red pepper flakes and garlic. Add the chicken, turning to coat. Cover loosely with plastic wrap and refrigerate for 30 minutes (or up to two hours). Bring it to room temperature just before cooking.

2. To make the dressing, in a small bowl whisk together the miso, ginger, vinegar, peanut oil, water, honey, ginger and garlic. Taste for seasoning and sweet-sour balance; adjust as needed, then set aside.

3. Slice the sugar snaps into strips lengthwise (this looks lovely; you can see the little peas inside peeking out). Put these in a broad shallow bowl with the radishes and edamame.

4. Heat a grill pan or gill to medium. Lift the chicken out of the marinade and shake off any excess. Grill the chicken, turning frequently, until it is cooked through, about eight minutes. Cut the chicken across the thighs into broad strips. Set aside.