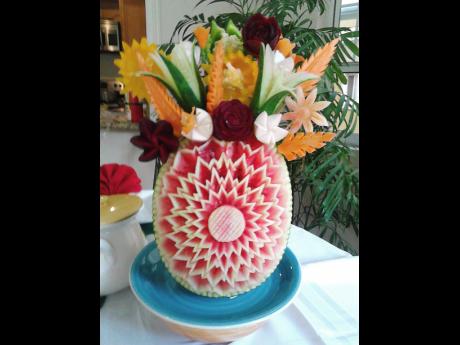 Contributed
Contributed Photo Melon Burst - one of Dyer's creations that include a melon, beetroot, turnip, carrot, sweet pepper and scallion. 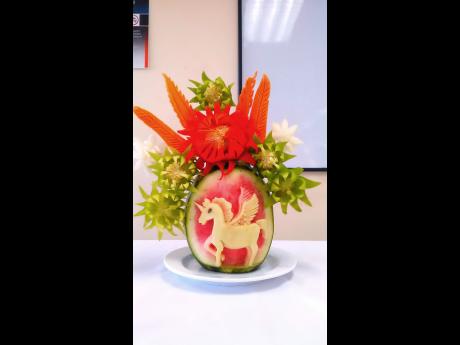 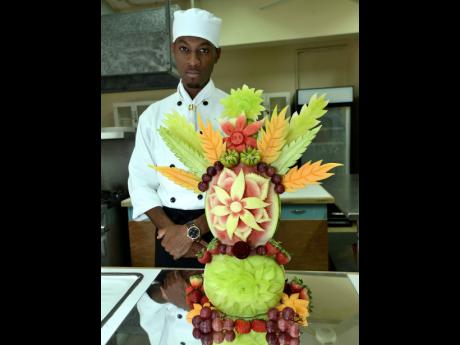 WITH THE quick flick of his small knife, precision, and agile fingers, young Delante Dyer has been carving his way into the hearts of culinary stalwarts and enthusiasts. He takes a regular melon, cantaloupe, strawberry and, yes, beetroot, with a few grapes, and creates colossal masterpieces.

The possibilities seem endless for Dyer, who is TPDCo-certified, and is currently a final-year student at the University of Technology (UTech), where he is pursuing a Bachelors of Science Degree in Food Service Management, majoring in Culinary Arts and Management.

An aspiring architect while in high school, Dyer changed course because of financial constraints, and began exploring the varied avenues of food preparation and the culinary industry. He completed an eight-month (HCTVET) Level One course at the St Monica's College in Ocho Rios, St Ann, in 2011, and then started a Level Two Accelerated Commis Chef programme at the Runaway Bay HEART Academy.

It wasn't until he worked as an intern at the Sunset Jamaica Grande Hotel as a line cook that he observed and was introduced to the rudiments of food carving by one of his mentors, Chef Winston Williams. He was instantly hooked and began researching and learning as much as he could about the craft.

"When I first saw it, I was amused and had an instant 'wow' factor. I started trying it and realised I was good at it. Once I watch someone doing a piece, (I just need to see it once), I grasp it quickly," Dyer told Food.

"Once done properly, a fruit and vegetable carving will always catch the eyes of patrons. With a pleasant combination of different colours and a high level of creativity, a fruit-and-vegetable carving can bring any display to life," Dyer added.

To test the mettle of his creations, Dyer has entered a number of competitions. To his credit, in his most recent competition, The Taste Of Jamaica (TOJ) Culinary Competition at the Montego Bay Convention Centre, he was apart of UTech's vocational team that won the competition for that category.

He also received a bronze medal for fruit and vegetable carving, going up against some of the more senior professionals in the industry. He has also won first place for the parish of St Ann, but was unsuccessful at the national level.

"Receiving awards at TOJ was the tangible proof of my progress in the art of fruit-and-vegetable carving. It gave me a feeling of accomplishment and self-actualisation and, unquestionably, I was most flattered with the fact that I could have secured an award against contestants that were already established chefs and had years of experience," Dyer said.

His skills are not limited to food carving. With the onset of lionfish in Jamaica, Dyer was also trained in the National Lionfish Project organised by the National Environment and Planning Agency (NEPA) as a Poissonier (fish cook).

Simone Walker-Barrett, one of his lecturers at UTech for over two years, told Food that Dyer is naturally creative with his hands. "He has a passion for the culinary world. He has exceptional skills and his carvings and creations look very realistic. Dyer is also a professional. You can count on him to be on time for any event and he is always immaculately attired," Walker-Barrett said.