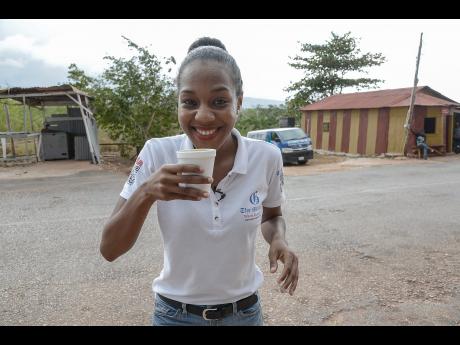 Can you tell Terri-Karelle is enjoying her soup? 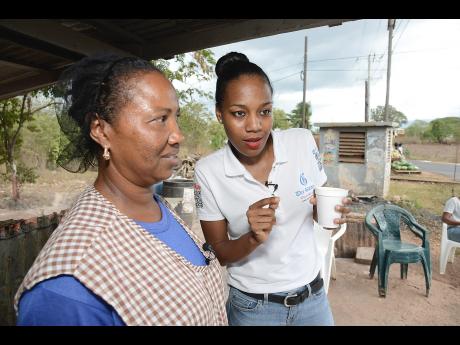 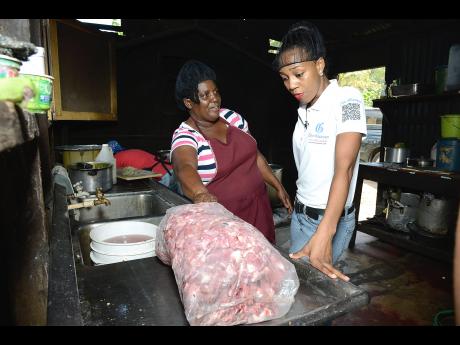 Local goat at its finest. Terri-Karelle chats with Miss Claudette as she prepares scrumptious curried goat. 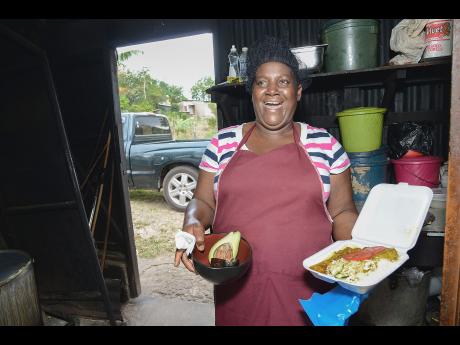 Talk about service with a smile! Claudette Barham has that down pat. 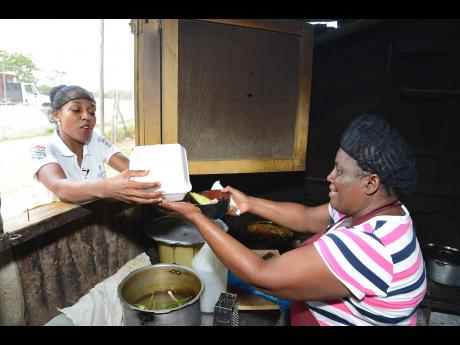 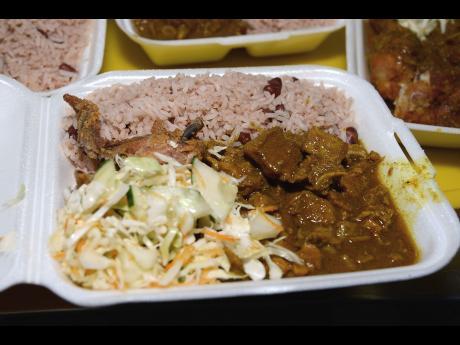 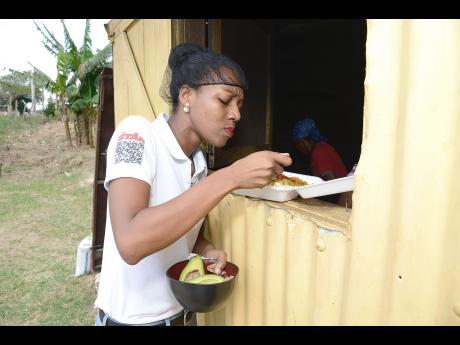 Terri-Karelle digs in to the delectable lunch box served by Miss Claudette. 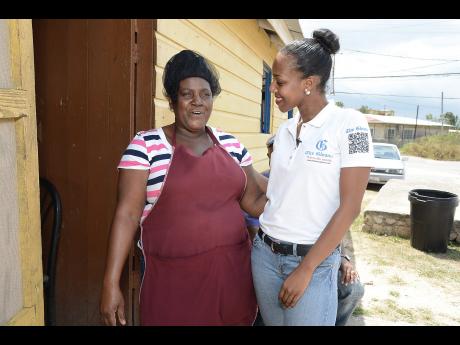 Terri-Karelle Reid and Claudette Barham engage in a heart to heart while the food is being prepared. 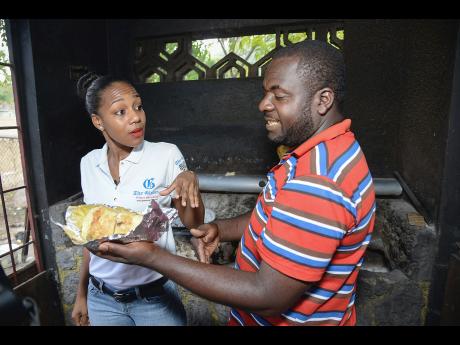 Terri-Karelle Reid listens as 'Duppy' explains how he sells the yam and gives a few culinary tips. 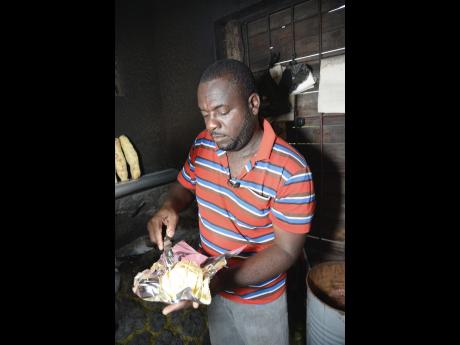 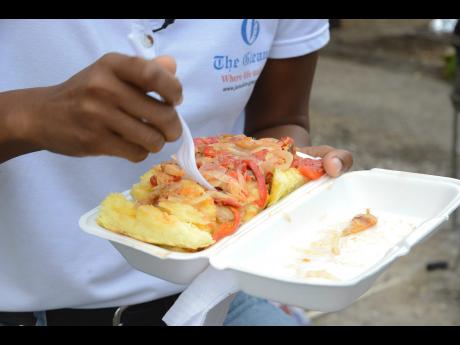 Gladstone Taylor/ Photographer Eat around jamaica feature Terri-Karelle Reid gets ready to enjoy her dish of cooked up salt fish and roast yam. 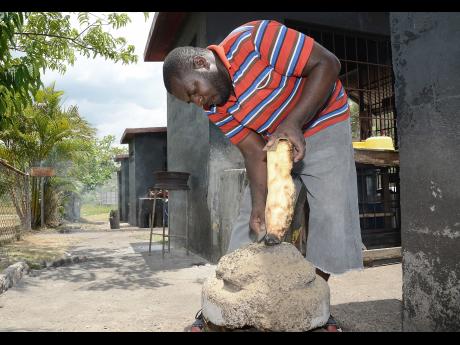 It was not a far journey to Manchester, but my hunger made it seem as if we were driving forever.

Perhaps it was the lure of the roasted yam and salt fish, but for whatever reason, I could not wait to get to Melrose Yam Park.

My friends consider me a foodie, but to be fair, I am more than that. I'm actually a little greedy.

As we disembarked the vehicle, several vendors raced towards us. I had no idea whose shop to go to and then I heard a loud baritone voice, "Miss Gleaner, over here suh you fi forward."

He was Christopher Taylor, a big, burly man with a penchant for making customers feel welcome.

I learnt that he has been a chef for the past 18 years and that his wife was also in that profession.

"Who is the better cook?" I enquired.

"It depends on what we cooking," he told me with a sly smile. While pieces of salt fish were left to dry in the blazing sun, Christopher showed me the ropes on how to roast yam to perfection.

"You haffi buy yam with hair and then you put it on the fire to roast. When it's roasted, an yuh knock it, it must sound hollow," he said.

"How you manage the smoke?" I asked.

"Yuh nuh smell my Express Cologne? It's still there. Mi always smell good," he told me.

He was certainly a character, and I was more than willing to learn his secrets.

"For the roast salt fish, the first thing you have to do is wash it because, as you know, it's salty. Then you put it in the sun for about two hours to dry. It takes about five minutes for it to roast - about two or so minutes for each side."

I watched in amazement as he used his bare hands to take the salt fish off the wood fire to begin the preparations for another customer.

"Most people rather cook-up salt fish more than the roasted one because dem a watch dem pressure," he told me as he began to get my food ready.

I sat crossed-legged on the outside of his establishment, impatiently waiting for him to bring me the food. Finally, the moment arrived, and I was more than prepared to dig in.

As I opened the styrofoam box, the steam from the roasted yam and cooked-up salt fish greeted me. The beautiful colours of the sautÈed tomatoes, onion and sweet peppers were enough to get my mouth watering.

But in true foodie fashion, I had to do the 'Terry Test' before I took a bite. I held the box in one hand to test how heavy it was. All true Jamaicans will understand this - if the box nuh 'heavy', we nuh get enough food!

Satisfied that he had packed the box to the brim, I discarded my fork and dug in.

"You want a peg a pear?" He inquired.

"Christopher, mi want everything!" I replied.

It was a fantastic stop, and he was a great host and chef. By the looks and taste of his food, it was obvious that he takes pride in his culinary skills.

As I was about to leave, he told me his nickname was 'Duppy'. I was quite taken aback as to why someone would be happy to have that name.

"Is Jerry D give me the name and it just stick," he said with a smile.

ON TO CURRIED GOAT

I was just about to get inside the vehicle to head back to Kingston when someone informed me that I had to check out Miss Claudette's island-famous curried goat.

Before the sentence was finished, I had already mentally made space in my stomach for more food, because all my friends will tell you, "From yuh say curry, you call Terri name."

Getting to the location was sketchy, as she had no visible sign on her restaurant. After driving around for a bit, I had finally located her (close to Spur Tree Hill) and, by now, I had become a tad bit hungry.

She greeted me with a huge bear hug.

Miss Claudette Barham's signature dish is curried goat and mannish water. So legendary are her culinary skills that persons from all across the island - and the world - travel to her establishment.

"My restaurant is called 'Miss Claudette's Top Class Curry Goat Restaurant'. I prepare my food with local seasonings and love," she explained to Food.

I questioned her as to why her curried goat was considered the best, and she shared a good old country recipe with me: She burns her curry first.

My mom had taught this to me, but my co-workers were quite taken aback, having never heard of this before. Miss Claudette was pleased with my knowledge.

"Mi nuh too expensive enuh, 'cause me nuh use foreign goat, only local ram mi use. I cook about 70 pounds a ram goat or more per day, because, as mi put on the pot, people start arrive," she said gleefully.

I was introduced to her other chefs, about four in all, and I was quite surprised at this.

"You sure too many cooks nuh spoil the broth?" I jokingly asked.

"No, enuh. A years we a do this. A long time mi deh here so, enuh - from way back when. When I started out, it was just a likkle shop, but I keep adding and adding on a likkle part, so now I even have a dining area," she proudly told me.

I was being educated on 'curry goat etiquette' and I was happy. I was told that vinegar should not be used on the meat as it will take from the ram-goat flavour.

As I watched her prepare her curried goat, several customers popped in for lunch. I then realised that she offered no other curried product apart from goat.

"Everybody know say a goat me do from day one, so me nuh too branch out," she told me.

She had several big pots in her kitchen and I was in awe of how efficient she was.

By this time, she had shared my food and I once again did the 'Terri Test'.

It was delicious. The mouth-watering goodness of the curried goat had me begging for a 'tups' more.

Her portions are to the liking of any Jamaican, the meat nice and tender, not too spicy or too mild - JUST right! To top it off, she offered me the largest, sweetest avocado there was. Miss Claudette certainly knows her way to my heart. Once again, I had barely made it to the vehicle when someone suggested I visit 'Soupy'.

Technically, Soupy was closer to St Elizabeth, but being an adventurer, I just had to visit.

I am not a soup fan - never have been, never will be, but I must admit that this soup was unique.

It technically wasn't a shop, more like a stand. While most persons have heard of red peas, beef and chicken foot soup, not many can say they have ever tried cow skin soup with peanut grain.

I arrived at Miss Paulette Thomas, aka Soupy's, stand at almost 3 p.m. As I walked closer to her huge metal pot, I realised I was practically staring at the bottom.

"Unuh come late, man. Soup nuh last long enuh. As me put on the pot, it sell off," she said.

I had to ask: how did she come up with the idea for a cow skin and peanut soup?

"Well, we just decided to try something different and people liked it. People love it because they always get the same taste. We are consistent. People love the peanut, enuh, especially the men. Dem think it do sumn for them," she said.

I was just in time to get the last cup from the pot and I was pleasantly surprised. It was thick, gummy and rich.

It is just wonderful that Miss Paulette was able to make this quaint little spot by deserted train tracks her place to call the home of cow skin soup. A definite pit stop for travellers and foodies alike.

She was pleased that I had enjoyed it, even though I am not a soup lover.

"Many try to duplicate it, but there is only one," she told Food.