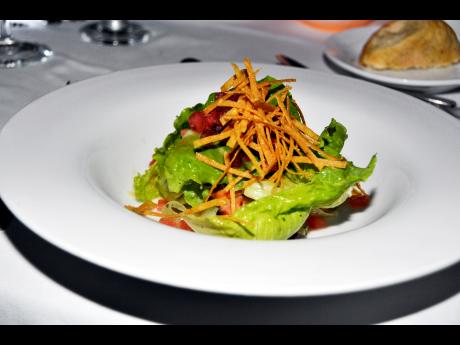 Caribbean Spiny Lobster Salad at Marguerites Seafood by the Sea in Montego Bay.

Executive chef, Cecil Jagdath, outdid himself again this year at the pre-Restaurant Week ambassador dinner, digging into his cutting edge Caribbean fusion cuisine, pulling out treats that caused the taste buds to jump for joy.

The chef, who has transformed the offerings at Marguerite's Seafood by the Sea, one of the Epicurean options during Restaurant Week 2015, satiated the appetites of RW Ambassador, Natasha Lee; her guests, Joan and Clive Lee and Dr Anthony Vendryes and his wife, Dorothy, last Wednesday night in Montego Bay.

Jagdath, who doesn't have to try hard to show he is a chef extraordinaire and James Symyrozum, the sommelier of no mean order, combined their efforts and served three of what I have selected as my favourite.

They include, the Caribbean spiny lobster salad, the drunken snapper carnival and a flambe steak Diane modern.