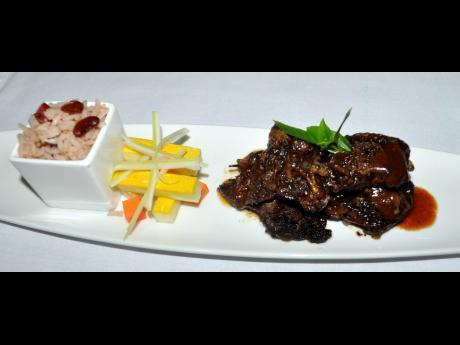 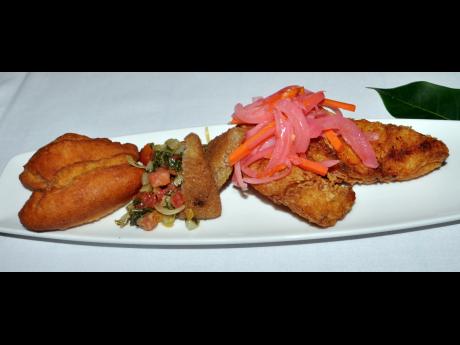 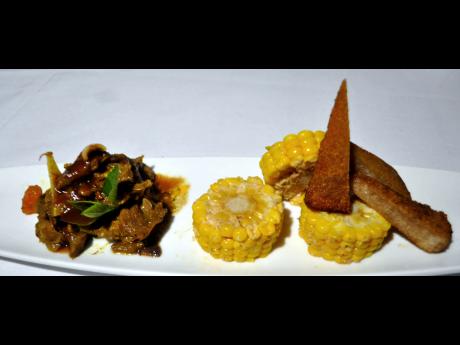 Dave Rodney
This exquisitely delectable curried goat was as good as it gets. 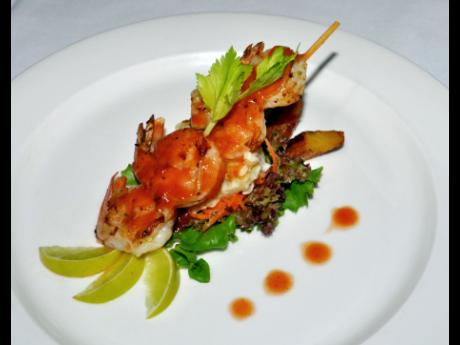 Dave Rodney
Shrimp jerked to perfection – unmistakably Jamaican but not too spicy. 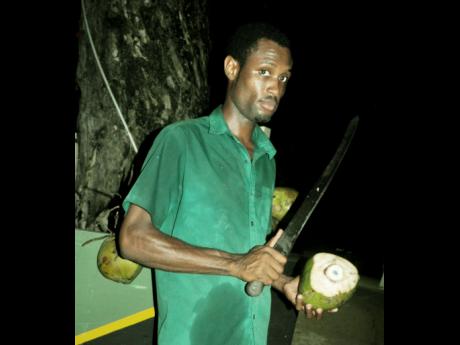 Dave Rodney
Jamaicans take jelly coconuts for granted, but visitors from some parts of North America have never seen it before. 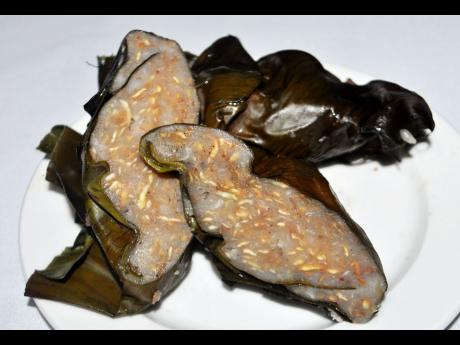 Hedonism II, the all-inclusive resort in Negril that always tantalises, now has a brand new face. About two years ago, the 280-room resort was acquired by new owners, and since then guests have been enjoying the dazzling overhaul of the resort's lobby, swimming pool, main entertainment stage and dining room spaces. The Cecile Neita Levee undertaking is getting the nod of approval for successfully turning the 1970s playpen into the glittering new millennium wonderland of the west.

At Hedonism, the business of food is taken very seriously, and the resort's executive chef Anthony Miller, who hails from Dallas, Texas, has ensured that the cuisine remains as mouth-watering as ever. The radiance of the newly upgraded dining room continues to be supported by a number of speciality restaurants, including Pastafari (Italian) and Harry-San (Asian). But no matter what is being served up elsewhere, guests always seem to find an enduring allure at the main dining room, and the dazzling array of choices there is always a magnet, but even more so on a Monday night. On this night, the entire fare is a celebration of Jamaica's multi-ethnic cuisine.

I recently joined Chef Miller on a Monday night to savour some of the Jamaican treats, and I was very impressed by the flavours and the authenticity as well as the wide variety of divinely delicious dishes that were available.

My first stop was by a coconut stall for some fresh, natural coconut water from nuts that were picked earlier that evening, and cracked opened on the spot. As a Jamaican, one takes the refreshing taste of jelly coconuts for granted, but the truth is that most visitors from up North have never seen or tasted this odd-looking delight before, except from cans. So the coconut stall was a magnet of curiosity from guests. Some guests lingered to taste the jelly, and they watched in amazement as the coconut man created instant, on-the-spot spoons for the jelly by cutting off a section of the husk.

Next, it was off to the soup station where the featured soup was mannish water. At Hedo, like elsewhere across Jamaica, this soup is a full-bodied savoury blend of goat meat, ground provisions, vegetables, seasonings and spices. Many locals say mannish water is an aphrodisiac. Jamaicans are not famous for keeping secrets, so the word is whispered around to visitors who then take a keen interest in this mouth-watering soup.

A perfectly baked Jamaican crab cake followed - crunchy and golden-brown on the outside and moist and mesmerising on the inside, embellished with garden-fresh microgreens. The array of main course choices were seductively dazzling. Some of the options were traditional and straight from grandma's Dutch pot, while others were rebooted with a nouvelle cuisine twist, but all were unmistakably Jamaican.

Foundation menu classics like jerked pork and chicken are de rigueur. But the menu has a new spin each Monday, depending on what produce is in season. My sampling expedition had me exploring less predictable treasures, starting with the jerked shrimp that was superb. The signature authentic Jamaican jerk flavour is there for sure, but not overdone and only moderately spicy, which is perfect for most guests.

Next up, the good ol' oxtail. A tender, velvety stew served with rice and red peas, and julienne of yellow squash. It's always heaven to find obedience in chunks of oxtail, where the meat is putting up no resistance, but falls off the bone at the diner's command. The curried goat was as good as it gets, exquisitely delectable with aromatic undertones of ram goat in an inviting yellow sauce, harmonised with sweet corn and bammy. A tangy escoveitched fish with a drizzle of vinegar and Scotch bonnet marinade served with bammy and festival closed out one part of the journey.

No meal is complete without desserts, and the Jamaica culinary tradition has no shortage of sweet treats. These temptations are all available on Monday nights. From fruitcake to potato pudding, gizzadas, grater cake, toto, drops, the now famous Hedo chocolate fudge, tarts, and a lot more. I was intrigued by the dukunnu, a flavourful creation that originated from West Africa, where several ingredients, including coconut and cornmeal or sweet potato and various spices, are mixed into a dough, wrapped in banana leaf and boiled to produce a pudding-like delight.

Dukunnu is also called blue drawers or tie a leaf. Unfortunately, the art of creating this dessert is slowly disappearing across Jamaica, but happily, Hedonism II revives this tradition on Monday nights.