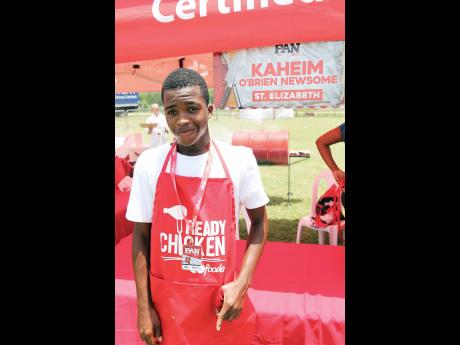 Regional 1 of PAN 2017 was held at Independence Park in Black River, St Elizabeth, last Saturday, where 15 extraordinary Jamaicans got the chance to compete for the coveted title of PAN champion 2017 in Half-Way Tree on October 29. Until the next regional on September 30, each week the Food section will highlight the touching stories of these contestants and their journey to create the best pan chicken.

When his name was announced as the first-place winner for the parish of St Elizabeth in the just-concluded PAN 2017 Regional 1 competition, 18-year-old Kaheim Newsome paced the stage, held on to his cap and smiled as he fought back the tears.

"When my name was called I was saying, 'thank you Jesus'. I wasn't expecting it even though I worked very hard," an excited Newsome told Food.

"I was encouraged to enter by my stepfather, Rikardo Ulette. He was the winner for St Elizabeth last year," Newsome confided.

He continued, "Being around my stepfather while he prepared chicken from Wednesdays into the weekend, I learnt a lot. I never had any experience in cooking but just by watching him I learnt as much as I could."

Newsome lives with his stepfather, mother and three siblings in Santa Cruz, St Elizabeth, and is currently a sixth-form student at the Lacovia High School.

"I entered PAN 2017 because I wanted to improve my skills, and if I am lucky in the grand finals, to further my education. The experience has been a good one and cooking is something I have always loved," revealed Newsome.

"My chicken was well seasoned and I had to ensure that the sauce was right. The sauce is something I want to improve on for the finals I just want everything to be perfect."

Newsome is in preparation mode for the Grand Finals which takes place on Sunday, October 29 at the Half-Way Tree Transport Centre in Kingston.

JN Small Business Loans, which is a partner for PAN 2017, offers a business grant as part of the prize package to the Grand Final winners, something Newsome is hoping he can benefit from.

"I want to one day open a jerk centre and a restaurant, so the business development grant would come in handy for those plans," said Newsome, who aspires to become an architect.