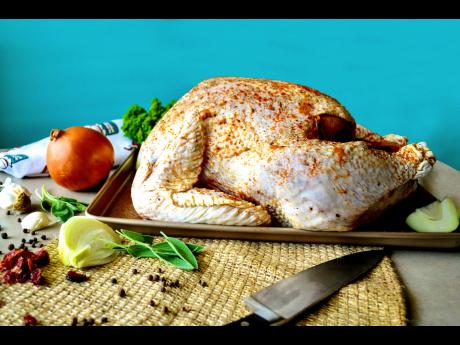 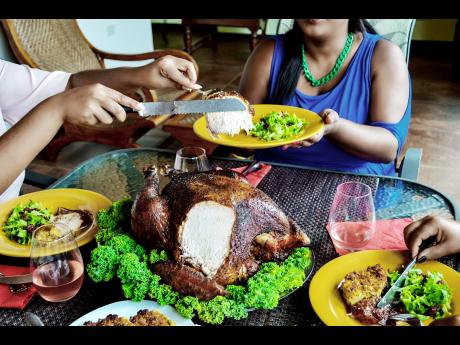 Contributed
Now your family can enjoy a new kind of poultry. 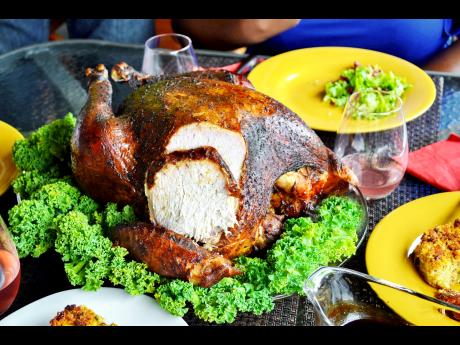 Contributed
Turkey meat is very lean and perfect if you are health conscious. 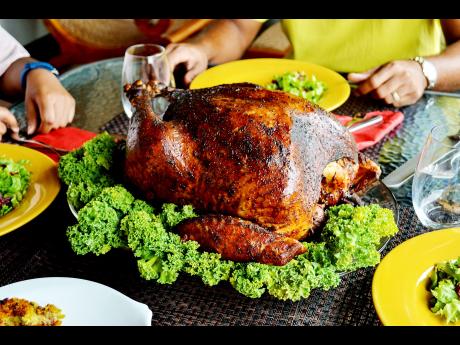 Contributed
For the Yuletide season, you can enjoy locally grown turkey. 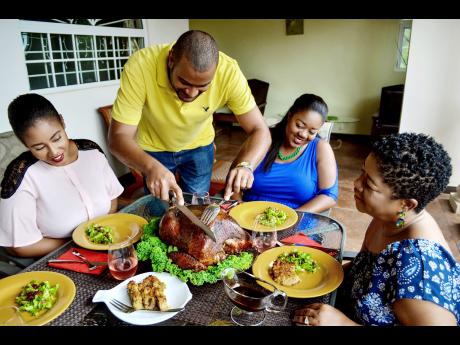 Contributed
Jason Neil carves the turkey while looking on and ready to indulge are (from left) Lauren-Jade Holland, Jannae Richards and Hyacinth Campbell.
1
2
3
4
5

As the Christmas season approaches, Jamaicans can now add new poultry to their feast for the festive season.

Courtesy of Newport Mills, a division of the CB Group, locally produced turkeys are now available. In response to local demand, in June, they started distributing turkey poults to local farmers, with the second set distributed in September.

According to Dr Gabrielle Young, "Our involvement in turkeys started in June this year, so it has been a few months now. But we have had requests from farmers for about two years now."

Young continued: "Consumers prefer locally grown turkey. So after we assured the regulatory bodies that the turkeys were coming from a place that was safe, we were approved to bring in the turkeys."

Turkey meat has been in high demand partly because of its protein composition and the connotation of festivities.

Young explains: "Turkeys have a distinct flavour, and they are five times the size of chicken. As it relates to meat quality, turkey is a leaner meat, and if you want a healthier diet, turkey would be the preferred choice to consume. It also has a different amino-acid profile than chicken."

With the number of farmers involved in turkey production, the move will help in satisfying the demand for turkey, even outside of the festive season.

The farmers involved are growing from fewer than 10 turkeys all the way to hundreds. The birds take between 12 and 24 weeks to get to market weight, and those supplied by Newport Mills Ltd can grow up to 50lb in 24 weeks.

Newport Mills, through its Nutramix brand, manufactures and distributes a specific feed for turkeys.

"We have started producing a special turkey starter feed that has 28 proteins. Turkeys require much more protein in their early days. We do not recommend giving them broiler feed because that is too low in protein. Nutramix is the only company in Jamaica that is making and selling turkey feed to farmers across the island.

1. Wash the turkey with the vinegar (be sure to remove the giblets and neck that are usually used for stuffing).

2. Use a paper towel to pat the outside of the turkey to remove excess moisture.

3. Melt butter and mix it with 5 tablespoons of the Jerk Seasoning/Sauce and olive oil. If it is too thick, use a food processor to liquefy.

4. Fill your turkey injector with the mixture, and inject into each leg and then a shot on each side of the breast.

5. Rub the remaining Jerk Seasoning/Sauce on the outside and inside of the turkey and into the cavity.

7. Start first by smoking the turkey on a coal barbecue grill (must have a cover) or a smoker grill. A gas grill can also be used. The fire must be very low and the coal must be white. If you have pimento wood or Pimora pimento briquettes available, use with the coal.

8. Put the turkey on the barbecue rill and cover. Let the smoke soak in the flavour, and leave on the grill for 2 hours, turning it so each side gets 'smoked' from the coal.

10. Place turkey in the roasting pan and cook in the oven for 3 hours. As the turkey cooks, baste frequently, using the mixture that was injected into the legs and the breast.

11. When the turkey is cooked, leave the juices in the roasting pan as it will make a great gravy.

12. Stuff the turkey to your liking then return to the oven at a low temperature to keep it warm.

Remove the turkey 20 minutes before carving.