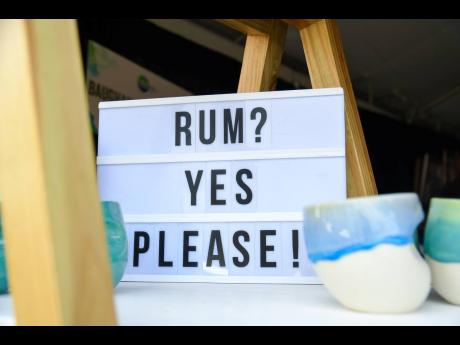 Tropical oasis meets estate. That was the atmosphere on the lawns of Hope Gardens in St Andrew for the first-ever Jamaica Rum Festival (JRF) last weekend.

The two-day event welcomed rum people to an epic experience and eager patrons could not wait to participate in the many offerings available.

‘From cane to cup’, attendees were greeted by the historical heritage house, where they took the virtual tour of the journey through rum: the ageing of rums, the rum barrels, and the rum-making process. They were even invited to taste sugar cane, wet sugar and molasses, as well as cane juice.

This opened the gastronomic gateway to the savoury and sweet soirée. Armed with a couponed ticket and a JRF cup, guests sought refreshing refuge by the main bar, where they were given a welcome drink.

From there, many sauntered over to other rum stations and received salivary samples from Wray and Nephew, Appleton, Monymusk, Hampden, and a Wild Card. Sangster’s Rum Cream was also available for those who appreciate the smoother, creamier side of life. Rumfire had its very own booth on blazing display.

Once all the stubs had been used, rum lovers employed their cash supply as the new source of intoxicating libations.

While on the outskirts, among the booths, brands like Likkle Tea held a tea party of sorts for customers.

But the highlight of JRF came with the exciting ‘ruminars’ hosted by Global Rum Ambassador Ian Burrell, who shared his experiences around the world with rum; senior blender Appleton Estate David Morrison, who dished out food and rum pairings and Appleton Estate master blender, Joy Spence, who explored the various stages of rum. Monymusk educated rum patrons on their unique rum making process and offered a tasting at the end. J. Wray and Nephew Academy taught attendees on the different methods of making a cocktail: shaking, stirring and building. Also, JWN led a ‘vibesy’ live mixing demonstrations on stage and then they hosted a mixing competition for sponsors to judge.

While a few would have preferred the event to be ultra-rum inclusive, it’s safe to say that the first staging of Jamaica Rum Festival provided the ideal weekend getaway from the mundane and was ultimately a success.