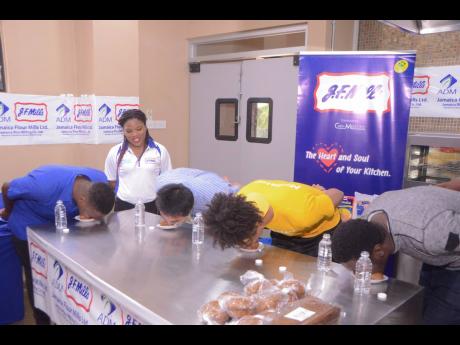 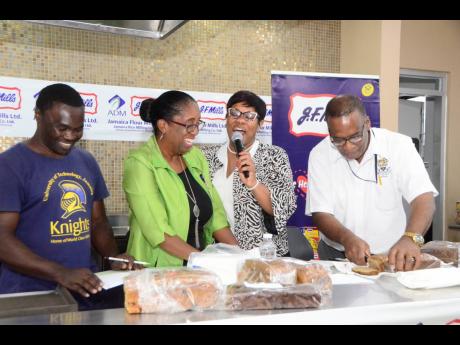 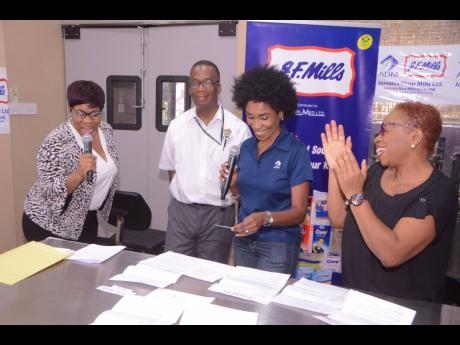 Contibuted
From left: Miss Kitty, the hostess, is delighted to announce the winner of J.F. Mills King of Buns Competition, while Winston Piper, chief judge; Donna Sharpe, general manager at J.F. Mills; and Alister Gordon are excited as they review the results.
1
2
3

Last week, the Jamaica Flour Mills hosted the King of Buns competition at the School of Hospitality, University of Technology (UTech). The competition was filled with excitement and a heavy vanilla aroma and decadent tastings. After hours of preparation, friendly rivalry and interactive sessions with the day’s host, Miss Kitty, Captain’s Bakery copped the title of the best healthy bun, alongside Hammond’s Bakery, which won the traditional bun category award.

“It has been an excellent product over the years and we had confidence in it entering the competition, and hope to capitalise on this win,” said Russell Hammond of Hammond’s Bakery.

He disclosed that preparations for them began from March 26 and out of that batch, six buns were selected for competition.

Sixty-year-old Golden Loaf Baking, known for producing over 175 baked products, was the second-place winner in both the health and traditional categories, while Top Loaf took home the third-place title.

Judges Marcia Fraser-Cummings, Winston Piper, lecturers at UTech, and Reynard Ramon, 2018 J.F. Mills scholarship winner, critiqued unlabelled buns by tasting and feeling the texture of each. The audience became excited when they were asked to plunge into the fun of competing against each other in a bun-eating contest. This consisted of four male rivals, Brandon James, Peter Wong, Donaski Foster and Stacio Green, students at the University of Technology, and a visitor from China. They eagerly devoured the delicious buns, as onlookers cheered them on with remarkable team spirit and enthusiasm.

The J.F. Mills Kings of Bun competition started in 2006 with the sole purpose of creating a space for bakers to participate and feel a sense of togetherness. “We always encourage friendly rivalry among bakers from different parishes,”said Donna Sharpe, general manager at Jamaica Flour Mills. “This initiative forces each bakery to bring their best. We are happy for the interest it has generated this year!

“This year, we have added another dimension to the competition to allow bakeries to promote an alternative option for Easter bun, ‘The Reduced Sugar Bun’. We are aware that many persons want to enjoy the Easter treat, but prefer less sugar than the traditional buns,” she disclosed.