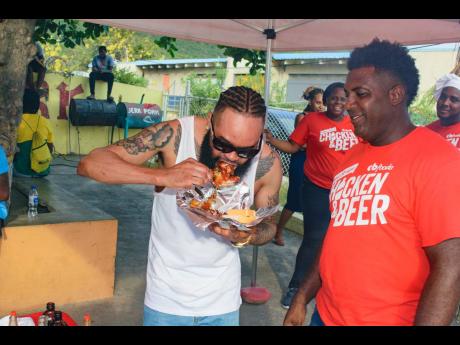 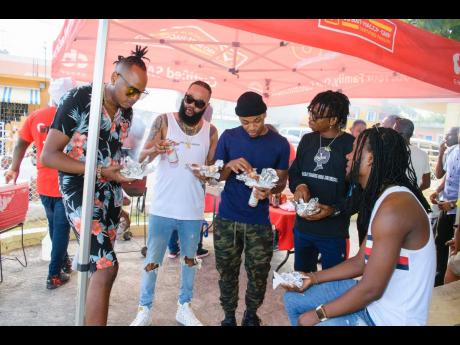 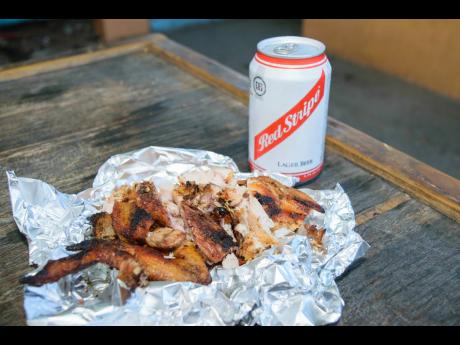 Contributed
Chicken and beer just got a whole new meaning. 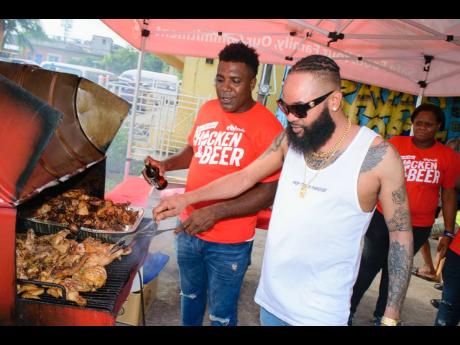 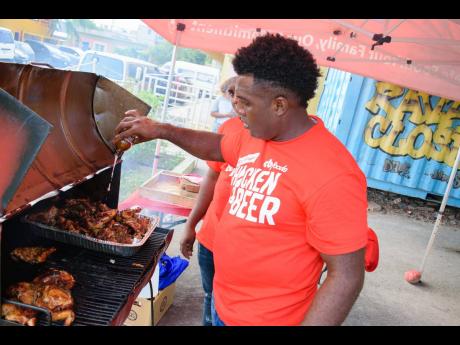 Contributed
Desrick Hamilton gets the grill going ‘Pon di Endz’ with his Red Stripe Beer infused chicken for the kick-off of the summer with the ‘Chicken & Beer’ promotion by CB Group and Red Stripe.
1
2
3
4
5

Late at night, Friday nights, those weekend country runs, pan chicken has been the saviour of stomachs in Jamaican culture for as long as anyone can remember. Driving along the roads of Kingston, especially at night, men can be spotted selling pan chicken. There’s smoke coming from the jerk pan, people gathered around, both on foot and in their cars, and a woman is usually by the side ready to help you with the drink of your choice. The experience can be likened to a mingle, a strangers mingle.

CB Chicken and Red Stripe have joined forces to bring Jamaica a hot summer promotion dubbed ‘Chicken and Beer’, and can you guess the brand ambassador? Chicken and Beer himself of ‘Ravaz’; the dance group currently bringing all the energy to Jamaica’s dancehall scene. In collaboration, they launched the promotion in Nannyville. Red Stripe brought the music and the beer, CB Chicken brought the chicken and their 2017 pan chicken competition finalist, Desrick Hamilton, also affectionately called Dean. Community members came out in their numbers to meet and mingle with a few outsiders and members of the Ravaz dance group.

The Chicken and Beer

The chicken was decadent. Have you ever had chicken bursting with so much flavour that you had to remind yourself to chew slowly? That’s exactly what you get from a chef with 19 years of pan chicken experience who has even catered to Prime Minister Andrew Holness and other affluent members of society.

“I can’t give away all my secrets but I get the chicken from CB Chicken, of course, clean it up, blend all the natural spices and add a little of that Walkerswood jerk seasoning. I even use cinnamon and a little nutmeg and I slowly jerk chicken. I’ve developed a love for the process. The face people make when they first bite into the chicken is what keeps me motivated,” said Chef Hamilton.

Hamilton, father of seven, not only provides for his family but uses his blessings to improve the lives of young people in his community by providing them with work.

On location was one of Hamilton’s assistants, Rasheed Simms. “Dean’s Catering has impacted my life in a good way. Tameka Forbes, Dean’s wife, has been an exceptional boss. We can provide for our children, it keeps myself and others out of trouble. it’s a good work he’s trying to do here by giving back to the community,” he said.

Kool Ravaz: “Di chicken well flairy. It taste good and most pan chicken chef use water because using beer is expensive, so this is definitely a cut above the rest in terms of flavour and texture. Everything sell off.”

Bravo Ravaz: “I enjoyed it. I went back for seconds. Definitely a must-have for any event. Long time mi nuh si dem put beer pon chicken and trust mi, it shot!”

Chicken and Beer: “CB Chicken taste good when it’s prepared, but Dean found the formula. Using beer instead of water on the chicken give it a nice Jamaican twist.”