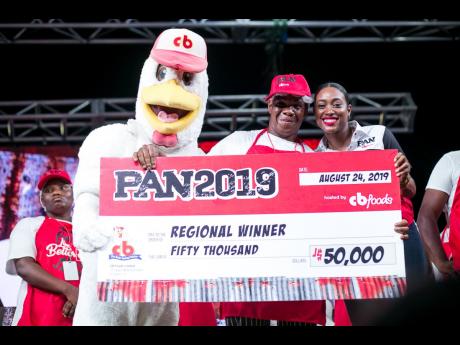 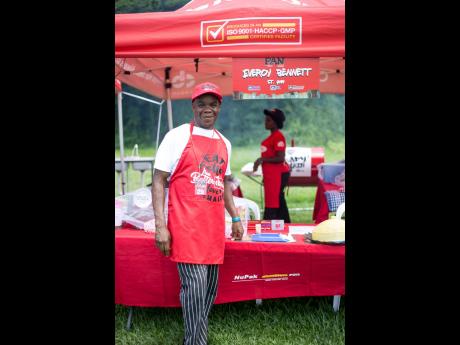 Contributed
Denton Gordon is poised to cook some spicy jerk chicken at the PAN 2019 Regional One Competition in Folly Oval, Portland
1
2

Sitting at Faith’s Pen Jerk Centre, Shop #7, in St Ann, Fiwi Island Jerk is a family business with over 40 years of history; a story which proves to be as rich as the seasonings that made now-owner, Denton Gordon, the PAN 2019 Regional One Champion.

Gordon says cooking is something that comes naturally to him. However, there is no denying that his culinary roots are indeed profound.

“My father started this business more than 40 years ago. It was called Rapheal Coolin’ Spot until I changed the name two years ago,” said Gordon.

The culinary champion got into business with his parents over 15 years ago; in July 2003 to be exact. He and his family had together been fuelling the family business and dream side by side. Until things, unfortunately, began to take a turn in 2010.

“It got to a point where I had to run business operations and all of that. My mother was overwhelmed and couldn’t take the pressure; she was getting older. As for my father, he had lost his sight.” shared Gordon.

Faced with these obstacles, he had no choice but to step up to the plate.

“There was a time when my mother tried to get back into the work, but she couldn’t keep it up. My sister also wanted to get involved in the business, but it wasn’t really her thing. There’s a process and a technique to it, and she couldn’t get into it,” he added.

The turbulence persisted for another two years. By 2012, Gordon was head chef and owner of the family business, fully in charge of its operations. The star chef shared some more about his family business:

“It was always my dream to see my parents benefiting from the business they started, even if they aren’t active in it. I would want to expand things to the point where I can put a system in place. So every two weeks or every month, there’s a substantial thing [profit] they can rely on,” he said.

Gordon believes the money from the competition will help him realise this dream, but he is not caught up on the cash prize.

“I don’t think CB Foods is looking for chefs who are just after the money. But those who are trying to make a difference as entrepreneurs. So you want to get to the point where your business is not just helping you survive, but it’s also developing and maintaining itself.”

Gordon says he can achieve this with the cash prize offered through the competition, but also the exposure and opportunities that may arise.

Denton Gordon landed the number one spot in his region, beating out 34 other contestants in Folly Oval, Portland. The star chef had this to say when asked how he feels about the imminent grand finals slated for October:

“I managed to come out on top against 34 people. Now, 14 of that 34 will be at the finals. I’ve already beaten close to half of the finalists in a sense. It’s just for me to adjust, keep the momentum going, and claim victory like I did in Folly Oval.”

Best of luck to Denton Gordon on his journey to the grand finals, and may the best chef win!